How Flood Insurance Could Drive Americans From Coasts

As salty waters ride the fossil fueled escalator of sea level rise into American streets and homes, rising flood risks may force coastal neighborhoods — if not entire cities — to be abandoned in the decades ahead. “You can’t build a seawall along the entire Eastern Seaboard,” Jessica Grannis, a climate adaptation specialist at Georgetown Climate Center, said.

The challenges of shoreline retreat loom large as the latest round of hiccupping reforms to the National Flood Insurance Program take effect this month. 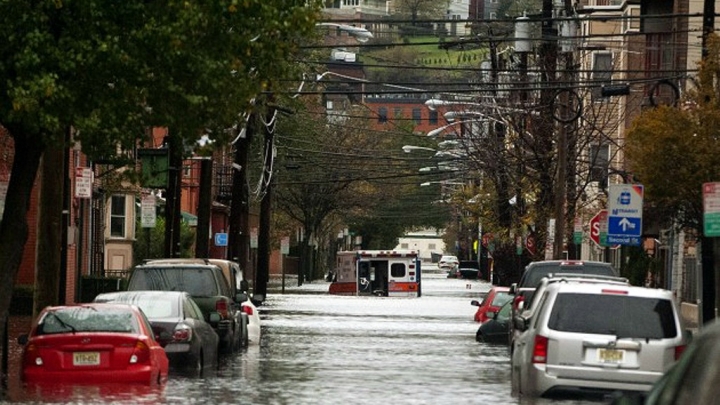 After hurricanes Katrina and Sandy left the program more than $20 billion in arrears, lawmakers started phasing out longstanding reductions in flood insurance rates for millions of property owners. The falling insurance subsidies are increasing premiums for coastal homeowners, saving public funds and reducing incentives for building in areas vulnerable to rising seas.

“Because of sea level rise, the flood insurance program isn’t just a financial liability,” Robert Moore, who directs the Natural Resources Defense Council’s water and climate team, said. “It’s also a completely unuseful tool for dealing with the risk of flooding that’s increasing along our coastlines.”

The 8 inches or so of sea level rise since 1880 is contributing to regular high tide flooding along the Eastern seaboard and Gulf coast, including in Miami, Washington D.C. and Virginia Beach. By the middle of this century, seas are expected to be another four to 19 inches higher than they were at the turn of the century, threatening tens of billions of dollars worth of property in Florida alone.

The new paper, written by Moore and NRDC water official Becky Hayat, lays out one vision for how Congress could re-imagine the flood insurance program in two years, when it’s next due to be reauthorized.

Under their proposal, property owners would continue to receive discounts on their federal flood insurance coverage. In exchange, those owners would agree to not rebuild after their house is substantially damaged by a flood, and instead accept an offer from the government to purchase their property — for its pre-flood value.

“If we’re going to give price subsidies, shouldn’t the nation get something in return?” Moore said. “What we should be trying to achieve, if we’re giving a subsidy, is reducing our long-term flood risk.” 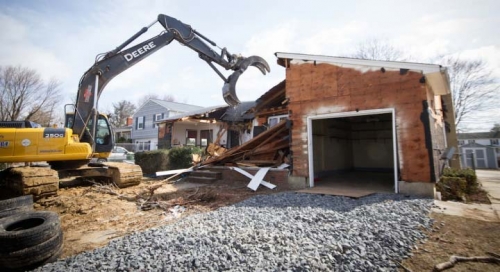 After this house was flooded by Hurricane Sandy's storm surge, it was purchased by New Jersey and replaced with parkland.
Credit: Rosanna Arias/FEMA

Post-Hurricane Sandy retreats from river floodplains are already underway in parts of New Jersey, funded in part by FEMA, which also administers the flood insurance program. Those efforts have been concentrated inland, in suburbs where property prices are lowest, hinting at how egregiously expensive and devilishly difficult it could be to plan and implement the types of broader coastal retreat strategies that sea level rise may require.

The efforts in New Jersey are also a reminder that the best time to retreat from a shoreline is often following a disaster.

In an essay discussing strategies for managing shoreline retreat in the U.S., published in Climatic Change last year, Resources for the Future researcher Carolyn Kousky urges governments and communities to “take advantage of disasters to implement retreat strategies.”

A benefit of the NRDC’s proposal is that it would help to do just that.

“If planned for in advance, rebuilding can be done in accordance with a strategy of managed retreat,” wrote Kousky, who is currently on leave from her job and couldn’t be reached. “Storm events can be windows of opportunity for change because they create a forced turnover in capital stock and a chance to rebuild differently. Decisions about such changes, however, should not be taken in the immediate aftermath, when lengthy negotiations could leave disaster victims in an unacceptable limbo.”

Even if Congress wasn’t interested in reforming the flood insurance program to ease shoreline retreat strategies, Moore says state and local governments could lead similar efforts through different programs and laws. Conservation groups and nonprofits could also help, such as by purchasing conservation easements on flood-prone properties.

Georgetown Climate Center’s Grannis agreed that further flood insurance program reforms are needed, and that they could be designed to support shoreline retreat strategies. She questioned, however, whether low-income coastal property owners would pay for insurance if it meant losing their home after a flood anyway.

“If we’re raising rates and people can’t afford them, often they drop the insurance,” Grannis said. “That’s their primary line of defense; that’s where their nest egg is. We’re increasing people’s vulnerability by not dealing with the affordability question.”

You May Also Like:
The Future of Mountain Glaciers Is Bleak
Urban Sprawl, Cars Hamper Cities’ Best Efforts on CO2
Obama Announces Plan to Train 75,000 Solar Workers
Hydropower Could be Risky Bet in Warming World
One Image That Shows Future of Climate Models