UK Forecasters: More Warming in Store Over Next 5 Years

Earth’s temperature will continue its steady climb thanks to global warming over the next five years, with 2016 likely to rival 2015 as the warmest year on record, according to an experimental forecast released this week by the U.K. Met Office. 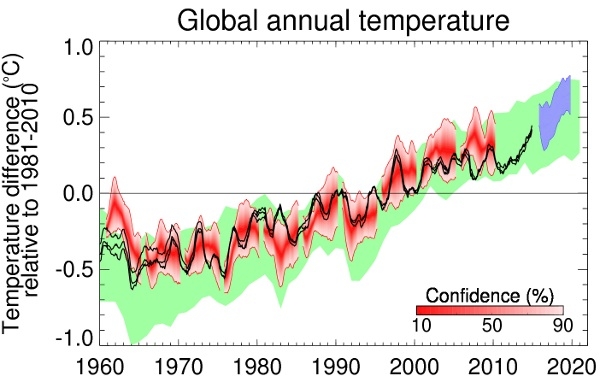 The range of global temperature predicted for the period 2016-2020 is seen in blue, with the black lines showing observed temperatures and previous predictions in red.
Credit: U.K. Met Office

This five-year forecast isn’t like the ones that appear on the evening news, rather, it is a research effort aimed at improving climate models. The goal is to get models to the point where they can have skill in predicting features like drought or seasonal hurricane activity a few years ahead, said climate scientist Doug Smith, who leads the Met Office effort. Such predictions would allow governments and societies time to prepare, he said.

Other climate scientists, though, are wary of just how skillful such predictions can be and cautioned against drawing too firm a conclusion from them.

Decadal forecasting, which began in 2007, uses the same climate models that are normally run to simulate changes across many decades, but only goes up to one decade out. The goal is to capture natural variations in the climate, like changes in ocean circulation or features like the El Niño Southern Oscillation, that are swamped by the signal of human-caused warming when looking out to the end of the century.

Researchers start the model simulations using the current state of the climate system, in particular ocean conditions, “and by doing that, we can potentially predict any kind of natural variability in the climate system” as well as the background warming signal, Smith said.

What makes the effort particularly tricky is that the prediction of natural variations like El Niño are typically only accurate on the scale of a few months, so looking out several years presents a serious challenge.

“Currently the ability to do that is limited and even marginal, although theory and experiments suggest some skill should be developed,” said climate scientist Kevin Trenberth, of the National Center for Atmospheric Research in Boulder, Colo.

Smith says that over time the Met Office has upgraded its models and they have found that they have some skill in predicting European winters, rainfall in Africa and Atlantic hurricane frequency.

In terms of global temperatures, he said that previous forecasts had captured the relative flattening of temperature rise for several years and the subsequent sharper uptick seen over the last few years.

Global temperatures are already about 1°C (2°F) above those of pre-industrial times; countries have agreed to try to limit that warming to 2°C above pre-industrial levels by the end of the century.

The Next Five Years

In finer detail, the models used by the Met Office suggest that the heat released by the strong El Niño that helped boost 2015’s temperature will continue into 2016, potentially causing it to rival 2015 for warmest year. But the run of consecutive record warm years would likely end there, with the possible shift to a La Niña state later this year.

La Niña is the cooler counterpart to El Niño, featuring colder-than-normal temperatures in the eastern portions of the tropical Pacific Ocean. It tends to overall cool the planet. Of course, there is still background warming at play, so 2017 would be “generally warm, but probably cooler than 2016,” Smith said.

Trenberth said he thinks the Met Office forecast is likely a bit high, based on previous research he has conducted. He thinks the current El Niño has likely already had its biggest impact on global temperatures and that 2016 won’t beat out 2015.

He said he does think, however, that there will a broader shift to warmer ocean conditions that will last for several years and that means that global temperatures will hover around the level they have recently reached before moving upward again, like stairs on a staircase.

It is this background warming from the heat trapped by greenhouse gases that actually accounts for most of the predictability in future temperature change, said Michael Mann, a climate scientist at Penn State.

While each of the scientists not involved with the Met Office said they saw the potential usefulness of decadal forecasting, they said that any particular predictions at present aren’t at the stage where they can be used for any kind of decision-making.

“These exercises are not entirely without merit, but their utility should not be overstated,” Mann said in an email.

Gavin Schmidt, director of NASA’s Goddard Institute for Space Studies in New York, said that while he thought the decadal forecasting effort was “interesting science,” it is still in the research phase “and so comes with a lot more caveats and an understanding that it might not have any skill at all.”

Smith was more optimistic about the prospects of such forecasting efforts, but also emphasized their experimental nature.

“We are developing these products and we are assessing them at the moment,” but they could one day be used to help areas prepare in advance for a busy hurricane season or the onset of drought, he said.