5 Things to Know About Climate on Public Lands Day

Saturday is National Public Lands Day, an annual environmental education effort and series of service projects benefiting America’s public lands. In the spirit of the Civilian Conservation Corps, more than 175,000 volunteers in all corners of the U.S. are expected venture outdoors to pitch in with scientific research and service projects.

The day is a celebration of the many things that public lands are, including: the National Mall in Washington, D.C.; the African Burial Ground National Monument in Lower Manhattan; the Grand Canyon in Arizona, the vast untamed wilderness found in the national forests of central Idaho, and much more. Even a jazz performance at the Old U.S. Mint in New Orleans is part of America’s system of public lands. 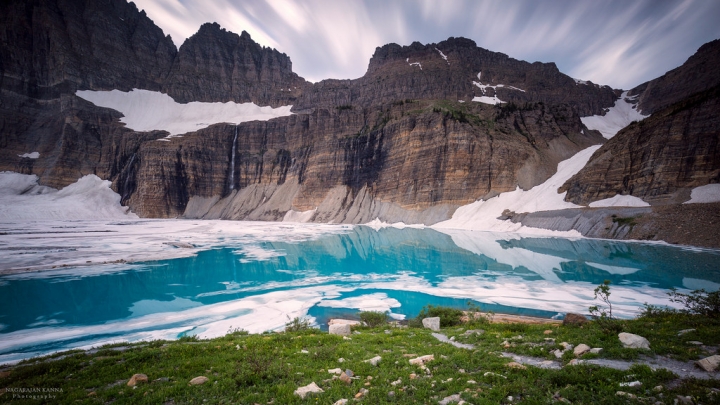 These are the remains of the rapidly-receding Grinnell Glacier at Glacier National Park in Montana.
Credit: Nagarajan Kanna/flickr

Nearly a Third of the U.S. is Public Land

Federally-owned public lands are a huge chunk of the U.S.  — they make up about 27 percent of the entire land mass of the United States. That’s nearly 640 million acres of land, most of which are national parks, monuments, forests, wilderness areas, wildlife refuges and historic sites.

All that land — roughly equivalent to the land area of Texas and Alaska combined — is home to many of America’s mountain ranges, biodiversity, important watersheds, forests and natural resources.

Public lands play a major role in the global carbon cycle because they’re a giant carbon sink — a huge storehouse of carbon, which trees remove from the atmosphere, helping to mitigate greenhouse gas emissions.

National forests alone cover nearly 800 million acres across the U.S. and store an average of about 70 metric tons of carbon per acre, according to the U.S. Forest Service, which estimates that woodlands across the country offset up to 20 percent of Americans’ carbon emissions annually.

Scientists all over the world conduct research — much of it related to climate change — in national parks across the U.S. In fact, the National Park Service bills the nation’s 408 national park sites as “laboratories for climate science,” encompassing some of the most wild and untouched lands in the U.S. They provide scientists with areas that serve as a measuring stick for how climate change has altered the natural environment.

One example of that is research at eight national parks being conducted on pikas, tiny rabbit-like mammals that are highly vulnerable to climate change because they live near mountaintops. Scientists fear their habitat may be lost as temperatures rise at high elevations.

Many other federal lands agencies have entire divisions devoted to climate-related research. The U.S. Forest Service, for example, uses the land it manages to conduct research on numerous climate topics, including how global warming affects subtropical forests in Puerto Rico, how climate change will affect forests’ ability to store carbon and many other climate-related subjects. 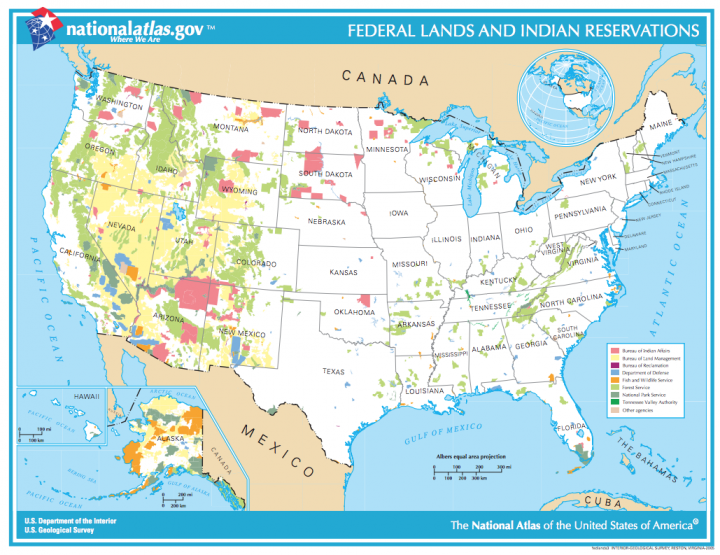 Public lands in the U.S. stretch from coast to coast, but are concentrated in the West.
Credit: National Atlas

Even though public lands store a lot of carbon, they’re also a huge source of it — places where energy companies drill and frack for oil and natural gas, and mine for coal, the primary driver of climate change.

Renewable energy also comes from public lands, mainly in the form of solar power California, Nevada and Arizona. There are currently 11 solar power projects either operating or in development on federal land in those states.

One of the First Symbols of Climate Change

If one piece of public land could symbolize climate change more than any other, it might be Glacier National Park, whose namesake glaciers could completely disappear this century, throwing the park’s very identity into question.

As researchers began photographing the park’s rapidly receding glaciers in the 1990s, the park began to show how dramatically climate change could alter America’s landscape. That’s because of the 150 glaciers that existed in the park in 1850, only 25 remain.

Many of the park’s largest glaciers will be gone by 2030.