One of the most dangerous storms in 60 years to strike the U.K. and parts of Europe is bringing hurricane-force winds along with major storm-surge flooding from Scotland to Denmark. The storm has the potential to cause upward of $1 billion in damage and has already caused fatalities in the U.K., where winds of greater than 100 mph have uprooted trees, knocked over power lines, and pushed a surge of water on the eastern shore of the country. 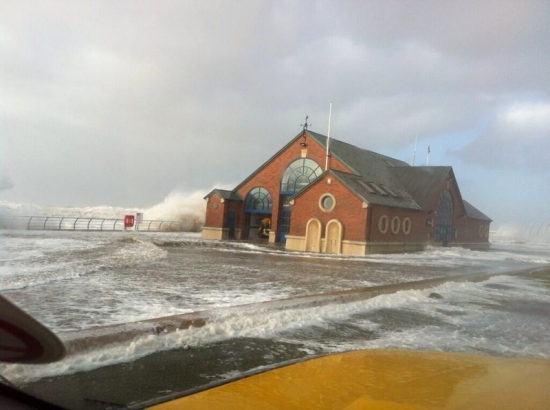 Storm-surge flooding is also occurring in Belgium, the Netherlands, Denmark, Germany, and southern Scandinavia, with the greatest damage expected in Denmark and Germany. The storm has disrupted travel, with flights canceled in Hamburg and major delays expected in Glasgow, Amsterdam, and Copenhagen.

The storm, which has been named Windstorm Xaver by the Free University of Berlin, has already brought a storm surge of at least 9 feet to locations along the eastern shore of Great Britain. In response, the government has issued nearly 30 “severe flood warnings” — the highest alert category — along with hundreds of other flood advisories, and has taken extraordinary steps to prevent flooding in populated areas.

The storm surge and high waves in excess of 36 feet are combining with unusually high spring tides to present an unusually severe risk of coastal flooding. “The coastal surge along the East Coast of England is expected to be the worst for more than 60 years,” the Environment Agency said on its website. Thousands have been evacuated due to the threat of flooding, and Prime Minister David Cameron urged citizens to heed the warnings via Twitter.

The storm will provide a significant test of northern Europe’s coastal flood defenses at a time when sea level rise due to global warming is escalating coastal flood risks. The Dutch are considered to be the world leaders in flood protection technologies, with the country’s engineers in high demand as cities like New York and Miami grapple with the impacts of global warming-related sea level rise. 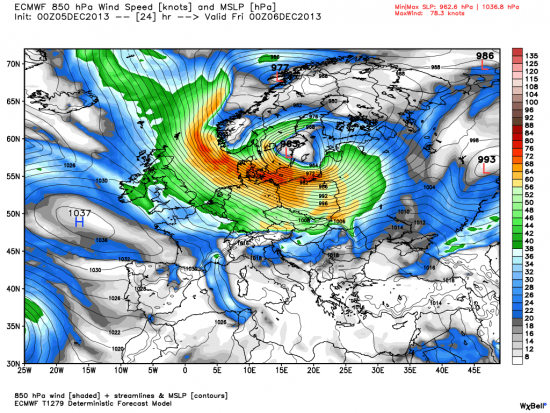 Computer model projection showing the larger area of high winds in the lower atmosphere, pushing the waters of the North Sea into Germany and Denmark.
Credit: WeatherBELL Analytics.

The extensive, multi-billion dollar storm surge barrier protecting Rotterdam, Netherlands — Europe's busiest container shipping port — has been lowered for the first time since it was constructed in the 1990s. Such barriers, most of which consist of steel gates that are maintained in the raised position like a garage door that is left open, are lowered into the water when a storm threatens. In England, the Thames flood barrier, which protects London from coastal flooding, was also lowered in advance of the storm.

The Thames barrier consists of 10 steel gates, each weighing 3,300 tonnes, that can be raised and lowered across the river to the southeast of London, based on statistics from the Environment Agency.

The Rotterdam and Thames barriers, along with other flood protection installations such as dams, levees, and locks lining the coast of the North Sea, are intended to prevent a repeat of a flooding disaster that occurred there in January 1953, when 2,551 were killed in eastern England, the Netherlands, and Belgium.

In England, more than 300 died on the east coast during that event, and about 25,000 homes were damaged or destroyed, and 30,000 people were evacuated.

The majority of the casualties were in the Netherlands, where much of the country lies below sea level. That storm spurred the establishment of flood warning agencies and a massive network of coastal flood defenses.

The storm surge from Xaver is expected to exceed the 1953 storm in some locations, but the improved flood protections mean that even if water levels reach heights seen in 1953, flooding is unlikely to be as severe. In Hull, England, for example, the storm surge caused the water level to soar to an all-time record high of 19 feet on Thursday night, but a flood barrier helped prevent a disaster, according to the Environment Agency's Twitter feed. 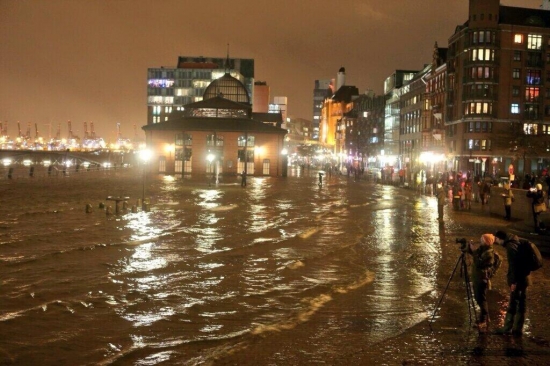 The center of Xaver is expected to spin its way into Sweden by Friday, trailing an intense cold front, along which a line of thunderstorms had developed on Thursday, with polar air and snows expected to move into Germany behind the front. Judging from the minimum central air pressure at the center of the storm, Xaver is likely to be stronger than another damaging windstorm that struck Europe in October. That storm, named “Christian,” caused more than $1 billion in damage.

The German Weather Service warned residents of northern Germany to stay indoors, away from trees, scaffolds and power lines to try to minimize the danger from the strong winds. The storm-surge forecast shows that the German Weather Service is expecting a maximum surge of 9.8 to 11.5 feet in northern Germany, including in and around Hamburg, the second-largest city in the country. Forecasts call for an 11.5-foot storm surge above average high tide in the vicinity of Cuxhaven and Bremerhaven, northwest of Hamburg, early Friday.

According to Jeff Masters, chief meteorologist at Weather Underground, such a surge would put water about 15.7 feet above mean sea level in Bremerhaven, which would come close to the all-time record of 16.9 feet.