Over the past couple of decades, tornado season has seen a lot more variation than it used to. Not only have some of the earliest and latest starts to the tornado season been recorded since the mid-1990s, but tornadoes are seeming to cluster together so that there are fewer days with tornadoes, but more tornadoes on the days that do have them, a new study finds.

This clustering of tornadoes could be due in part to larger changes in atmospheric patterns wrought by global warming, but there is still much work to be done to find those connections, said study author Harold Brooks, a senior scientist with the National Severe Storms Laboratory in Norman, Okla.

The findings, detailed in the Oct. 17 issue of the journal Science, are the latest in a series of recent studies suggesting that tornado variability has been on the rise, said Michael Tippett, a climate scientist and lecturer at Columbia University.

“It’s interesting that a couple of studies have come out all about the same time with a similar message,” Tippett, who conducted one of those studies but was not involved with the new work, told Climate Central. He suggested that the gap between tornado forecasters and the climate community could be narrowing, much as it did between hurricane researchers and climatologists about a decade ago.

Brooks and his colleague Greg Carbin, a warning coordination meteorologist with the Storm Prediction Center, also in Norman, have been combing through the tornado database, which extends to 1954, looking for trends. Their quest started, in part, because of some peculiarities during the 2012 tornado season.

The prior season, in 2011, had been tremendously busy, with 1,691 tornadoes (the second most reported for any season), including a massive late April outbreak across the Southeast that became one of the deadliest since the infamous 1974 Super Tornado Outbreak. The 2012 season seemed to be following suit, starting off at a brisk pace — eliciting comments that warming might be causing the season to start earlier — but then “the season, it turned out, was pretty much over by March 2,” Brooks told Climate Central.

That quiet extended into the prime part of tornado season, with May 2012 “among the quietest Mays ever” Brooks said. Looking back at the previous year, he and Carbin saw that the first three weeks of May 2011 were also unusually quiet — until the deadly outbreak that leveled parts of Joplin, Mo.

With the wild swing from 2011 to 2012 and the ups and downs within the seasons, Brooks and Carbin started looking into how tornado seasons had varied over the course of the database’s record. They focused on tornadoes of F1/EF1 strength or higher. The Enhanced Fujita scale, a revamped version of the original Fujita scale, rates tornadoes by the damage they cause, from 0 to 5, with 5 being the strongest. Tornadoes with a 0 rating were omitted because changes in reporting practices over the course of the database have led to many of what Tippett called “warts and wrinkles” in the data, particularly for the weakest tornadoes.

While Brooks and his colleagues found that the number of tornadoes could swing wildly from year to year, there didn’t seem to be any long-term trend. But when they looked at the tornado activity of individual months, they found that “there are more extreme months in the most recent 15 years of the database than in the first 45 years,” they wrote in the study. And those extremes fell both in the very active and very quiet camps.

The team, which included the SPC’s Patrick Marsh, also looked into how the start of the tornado season had been changing.

First, though, they had to come up with a definition for the beginning of the season. Unlike hurricane season, which has a defined sixth-month period, tornado season is much more fluid. Tornadoes have occurred on every date in the calendar in the U.S., so simply going by when the first tornado popped up wouldn’t work — a tornado could spin up on Jan. 1, but then not be followed by another one for many weeks. 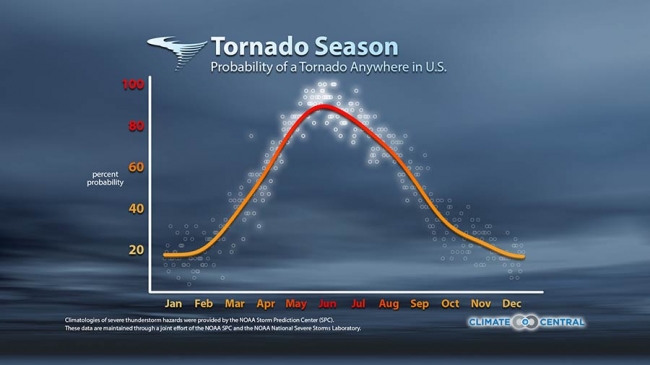 The daily probability of a tornado touchdown somewhere in the U.S.
Credit: Climate Central

The team decided to define the start of the season as the point when 50 tornadoes of F1/EF1 strength or higher had been reported ­— or about 10 percent of the total number of tornadoes typically seen during a year.

They found that while the average start date had remained about the same (March 22), there had been more late and early starts to the season in recent years. The four latest starts to any season in the 60-year records had occurred between 1999 and 2013, the authors wrote, while seven of the 10 earliest starts had happened since 1996.

The researchers uncovered something else that underlies those trends: the distribution of tornadoes per day had substantially changed over the decades.

On the one hand, the number of days with at least one F1/EF1 tornado has dropped from 150 to 100, a significant change as Brooks noted.

But on the other hand, the days with many tornadoes has risen. For example, there were only about 0.5 to 1 days per year with 30 or more F1/EF1 tornadoes during the 1960s and 70s. But over the past decade that number has risen to three such days per year.

“What we used to think of as a rare day is now a relatively common day,” Brooks said.

Brooks and his colleagues can’t think of any changes in the way tornadoes are reported that could account for the opposing trends, and nor could Tippett.

That means it is likely that something in the atmospheric environment is behind the trends in tornado variability. What exactly is changing and what’s causing the change, be it natural variability or global warming, is the next step in the research.

One problem is that tornadoes are a small-scale phenomenon, which can’t be produced in climate models. So instead, researchers must look for trends in the tornado data, as well as trends in the atmospheric environments that are needed for tornadoes to form.

Tippett’s work has found that some of the atmospheric ingredients needed for tornadoes have also become more variable over the past few decades. He says that his and Brooks’ results are “very similar,” even though they used different approaches, which Tippett says bolsters both sets of findings. And because the ingredients also seem to be changing, that strengthens the argument that some change in the environment, not in reporting, is behind the trends.

To say whether warming is behind any changes in the environment, though, those changes would have to be linked to some clear global warming forcing. Brooks said one possible global warming link could be the changes to the bending of the jet stream that scientists like Jennifer Francis have linked to declining Arctic sea ice, but he added that the association is still a controversial one. And even if it is found to be solid, it might have nothing to do with the tornado environment.

Tippett says that research into a connection between tornado trends and climate change is now at a similar point to where hurricane-climate change research was at around the time of Hurricane Katrina in 2005. While the gap between hurricane specialists and climatologists has substantially narrowed in the decade since, the gap between tornado specialists and climate researchers is “at least as big, if not bigger,” Tippett said. And it’s a gap that so far Brooks has been largely alone in trying to bridge, he said.

You May Also Like:
Winter Unlikely to See Repeat of Frigid Polar Vortex
Calif. Heads for Warmest Year As Drought Hangs On
Pentagon: Climate Change Poses ‘Immediate Risks’
September Was Warmest on Record, NASA Data Shows
Where Is El Nino? And Why Do We Care