Little Llangothlin is one of the highest lagoons in the Australian state of New South Wales. The enchanting waterway, home to campgrounds, swamp wallabies and critically endangered yellow-spotted bell frogs is considered so important that it’s been protected since 1996 under an international wetlands convention.

An incongruity in the listing has emerged, however — a reminder of humanity’s wholesale influence on the world around it.

New research suggests that the permanent water body’s very existence could be considered unnatural. Scientists who sampled midge and algae fossils to assess prehistoric lake levels were surprised to discover that it was mostly dry for at least thousands of years. Until, that is, European settlers reached the area in the mid-19th century, and began burning and tearing trees out of what had been a thick Eucalyptus forest, making way for farms.

“When we looked at the mud before deforestation, we found that that this wetland wasn’t a lake,” said University of Queensland paleoecologist Craig Woodward, who led the study, which was published Thursday in Science. “It was just an ephemeral swamp that was sometimes wet.”

Until they were removed, the trees had sucked water up through their roots and trunks and thrust it into the atmosphere through the pores in their leaves. Once those trees were gone, water began settling atop waterlogged soils, producing what now is a protected permanent lake.

Little Llangothlin isn’t the only waterway that forest-felling humans appear to have inadvertently created or expanded. Woodward’s research team examined data in scientific papers dealing with 317 wetlands around the world and concluded that about one in 10 had been made wetter by deforestation.

The researchers mapped their findings. The site of Little Llangothlin Lagoon is labeled as LLL, and Lake Emma, another site described at length in the Science paper, is labeled as LE.
Click image to enlarge. Credit: Science

The findings highlight a far-reaching but rarely considered effect of deforestation, which is still rampant around the globe. “In some cases, the wetlands we were looking at might not have even existed before deforestation,” Woodward said.

The findings suggests that water managers should consider deforestation, reforestation and different landscapes’ evapotranspiration rates — the tempo with which plants transfer water from the soil to the air — when planning for future water needs.

And because some plant species can only thrive at certain depths within waterways, deforestation could permanently alter nearby aquatic and semi-aquatic ecosystems by flooding them.

The effects of deforestation were found to be equivalent to about a 15 percent increase in rain falling in wetlands’ watersheds. But that doesn’t mean that deforestation is good for water supplies. Jackson noted that removing forests often sullies water quality, and that water vapor pumped out by leaves in the Amazon rainforest, for example, help to increase rates of important rainfall in the region — they effectively “recycle” rain. “Trying to come up with some kind of unifying effect for the world is quite difficult,” he said.

The findings were welcomed in general by experts, though questions were raised over some of the study's specifics. 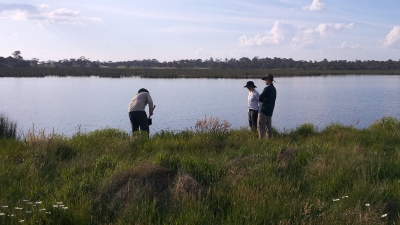 “That deforestation has increased water flows to some wetlands is perfectly reasonable,” said Rob Jackson, an earth system science professor at Stanford University. “You might be able to use this technique to make some projections about what might happen to a wetland in the future. Our data, and other people’s data, have shown very clearly that you can dry up rivers and streams by planting Eucalyptus and pines and other forest species.”

Between one and two fifths of the water bodies listed under the Ramsar Convention, which protects wetlands of international significance, were found by Woodward’s team to be wetter than they used to be because of deforestation. That finding was limited, however, by a lack of detail in the data available for the wetlands studied.

“I'd need to see more direct evidence that 20 to 40 percent of Ramsar wetlands today are affected substantially,” Jackson said.

Weaknesses in the underlying data were acknowledged by Woodward, who said the findings were nonetheless strong enough to demonstrate that the landscape-wettening effect of deforestation is globally important.

Mike Goulden, an earth system science professor at the University of California at Irvine, also questioned whether the analysis was robust enough to support some of the numbers included in the paper. But he praised the researchers for focusing on “a potentially important issue that has not received much attention” — how deforestation can affect water supplies for cities and farms. “It has implications for better understanding our current and future water resources,” he said.

You May Also Like:
New Amazon Carbon Maps May Help Limit Deforestation
Listen To a Glacier, Forecast a Flood
‘Nobody Is Truly Ready’ For Rise of Seas
An Inside Look at How Monster Tornadoes Can Form
2014 Will Go Down As Hottest In California’s History