The Atlantic’s powerful bluster twirls thousands of wind turbines off the coast of Europe, sending gigawatts of renewable energy coursing into the power grid there.

Currently, there is not a single wind turbine generating even a watt of electricity in American waters as oil platforms represent the only offshore energy development in the U.S. But the race is on to change that, beginning with a landmark wind rights auction on Thursday, which aims to open a vast swath in the Atlantic off the Massachusetts coast for what could be the the first and largest offshore wind power project in the U.S. 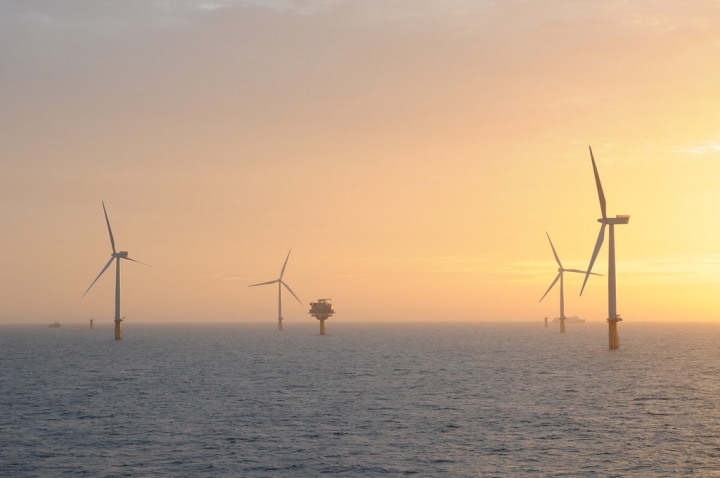 The Sheringham Shoal Offshore Wind Farm in the United Kingdom. No such offshore wind farms exist in the U.S.
Credit: Statkraft/Flickr

Twelve wind energy companies will be vying Thursday to bid on the right to develop dense wind farms within 742,000 acres of federally controlled open ocean beginning about 12 nautical miles off the coast of Martha’s Vineyard — the largest area off the Atlantic coast open to wind development. The U.S. Bureau of Ocean Energy Management, which also administers oil and gas leasing off the nation’s coastlines, expects that if those waters are fully developed with wind turbines, they could produce up to 5 gigawatts of electricity, enough to power 1.4 million homes.

The auction is a part of President Obama’s Climate Action Plan, which calls for 20,000 megawatts of renewable energy to be produced on public lands and federal waters by 2020 as the country tries to reduce its carbon footprint to combat climate change.

The U.S. is far behind other parts of the world in developing offshore wind power. In Europe, for example, there are more than 2,300 wind turbines spread across 73 wind farms operating in the waters off of 11 European countries, according to the European Wind Energy Association.

The auction is especially important in Massachusetts, where the future of the Bay State’s most famous and controversial wind power proposal, Cape Wind, has recently been cast into doubt. That proposed project was for a 100-turbine wind farm off the coast of Cape Cod.

Cape Wind faces a murky future, however, because its developer has terminated contracts to purchase land for support facilities without explanation and was suspended from taking part in the region’s wholesale power market.

But Thursday’s federal auction signals that offshore wind power on the East Coast and in New England is a lot bigger than Cape Wind.

Other smaller offshore wind auctions have been held in Maryland, Delaware and Virginia, totalling more than 350,000 acres on which much smaller projects are slated for construction. The proposed wind farm off Maryland’s coast, for example, would generate enough power for 300,000 homes. The federal government has also designated a 307,000-acre offshore wind energy development area in North Carolina, but no leases have been held there yet.

The Atlantic’s consistently strong breezes provide the potential for offshore wind turbines to generate a lot of electricity in U.S. waters.

The U.S. Department of Energy estimates that the U.S. has at least 54 gigawatts of offshore wind power capacity. Today, the U.S. has a total wind power generation capacity of about 61 gigawatts nationwide, all of it onshore, representing about 4 percent of total U.S. electric power generation according to the American Wind Energy Association, or enough to power 15 million homes. Total U.S. electricity generating capacity is more than 1,000 gigawatts, according to DOE data.

“The important thing about offshore wind is that it’s powerful, very consistent and much closer to where we live,” Rogers said. “That just makes it a potentially really attractive option for us to at least explore.” 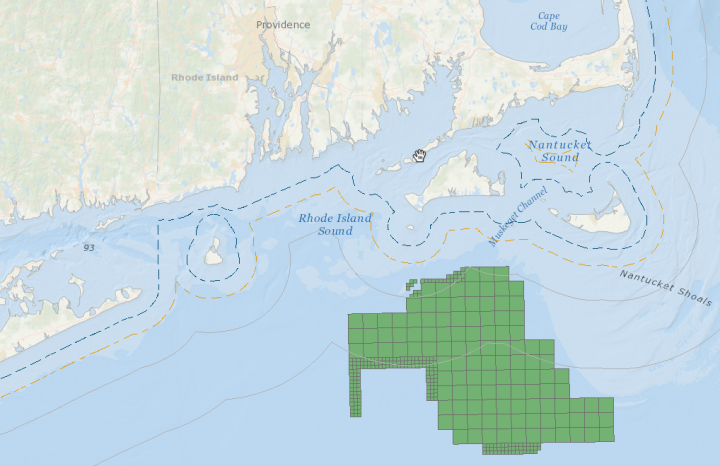 The green area on the map is the wind development area off the coast of Martha's Vineyard in Massachusetts that the federal government is auctioning this week. More than 740,000 acres of water will be opened to wind farm development.
Credit: Bureau of Ocean Energy Management

But considering the troubles and controversy facing offshore wind farms whether these new wind farms will actually get built anytime soon is another matter.

Jeremy Firestone, director of the Center for Carbon-Free Power Integration at the University of Delaware, said he believes the wind areas off the Nantucket and Martha’s Vineyard coasts, will be built out eventually.

“I don’t think any of us can predict the timeframe, but it will be built out,” he said. “Really, for offshore wind to take off, you really need something large to make a market, vs. one-off projects.”

The new project has many advantages over other projects farther down the East Coast because state policies are more favorable to renewables than in other states, and the wind blows harder in New England than off the Southeast Coast, Firestone said.

It’s important for people to see that offshore wind can work to help reduce greenhouse gas emissions, and the U.S. needs to get an offshore wind farm built soon, Rogers said.

“Massachusetts has been a pioneer in exploring the potential for offshore wind,” he said. “This is sort of a re-boot and another chance for Massachusetts to realize the vision and tap into a resource that’s so close to the population of New England.”

You May Also Like:
Thunderstorms Helping Bring Ozone Down to Earth
Find Out When the Coldest Day Usually Hits Your Town
2015 Begins With CO2 Above 400 PPM Mark
EPA Plans Oil and Gas Methane Emissions Cuts