This year is quickly excising 2015 from the dubious top of the climate record books. The most freakishly warm month on record, record atmospheric heat in February and now for the second month in a row, a new monthly Arctic sea ice low. 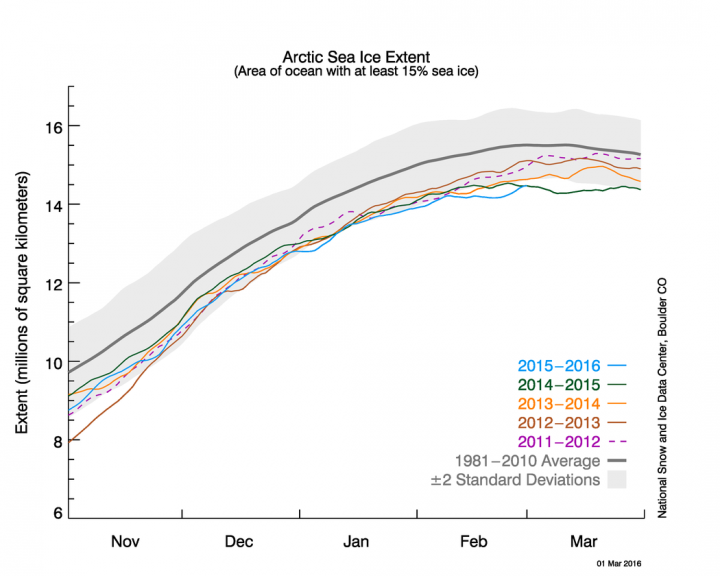 February saw record low sea ice extent, with ice running a significant 448,000 square miles below average. In essence, a chunk of ice four times the size of Arizona went missing in action from the Arctic. The number would be even more pronounced if not for a small growth spurt in the last week of the month.

The culprit? Once again, the Arctic was super warm for this time of year. The National Snow and Ice Data Center (NSIDC) , which released the new data on Wednesday, said that temperatures ranged from 11°-14°F above average in the central Arctic.

That’s in line with January, when temperatures were up to a surreal 23°F above normal for the month. With that type of mild weather, it’s not surprising that January also had a record low sea ice extent for the month.

The warm weather has driven an extremely delayed freeze-up for parts of the region following the September minimum, according to NSIDC. In some locations, mild weather delayed sea ice from reforming by as much as two months. 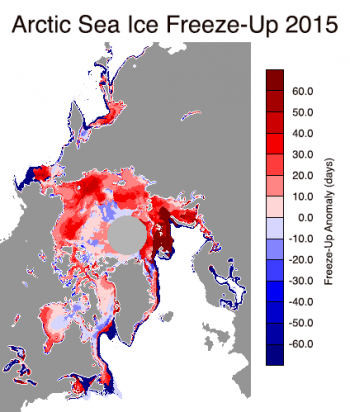 The departure from normal for Arctic sea ice freeze up in the winter of 2015-16.
Credit: NSIDC

That puts ice at a disadvantage during the upcoming melt season because it tends to be thinner and more prone to melting. The loss of thicker, older ice in general is a well-documented trend in the Arctic. More than half of the older ice has disappeared since 1987, which is in part helping drive the steep decline in overall ice.

But while this winter’s ice pack is troublingly low, there’s still no guarantee there will be a record low minimum, which usually arrives in September. There’s a lot of weather and shifting ocean currents that can affect ice between now and its minimum.

Rising temperatures and shrinking sea ice in the Arctic are two of the hallmarks of climate change. The region is warming twice as fast as the rest of the globe while sea ice has declined at a precipitous rate in all months and seasons, particularly the summer.

As the Arctic warms, it could alter the jet stream while disappearing sea ice could trigger a positive feedback that drives even more warming around the globe as darker ocean water absorbs more heat. In short, none of what’s happening there is good news for the region or the rest of the world.

You May Also Like:
What To Know About February’s Satellite Temp Record
China, U.S. Lead Global Boom in Wind Power
Syria’s Drought Has Likely Been Its Worst in 900 Years
Coal Use Falls Further as China Plans Massive Layoffs