Councilmembers of an island town in Georgia met in a police station near sandy beaches last week to mull a plan for coping with worsening floods. The meeting followed unprecedented king tide floods in the fall that inundated the island and nearby Savannah, and shut down the highway that connects them.

“We’ve had more frequent flooding in areas that haven’t flooded before,” said Jason Buelterman, mayor of the beach town on the eastern shore of Tybee Island, where the population of a few thousand residents swells each summer with vacationers. “In November, water was coming into people’s garages and stuff. It had never happened before.” 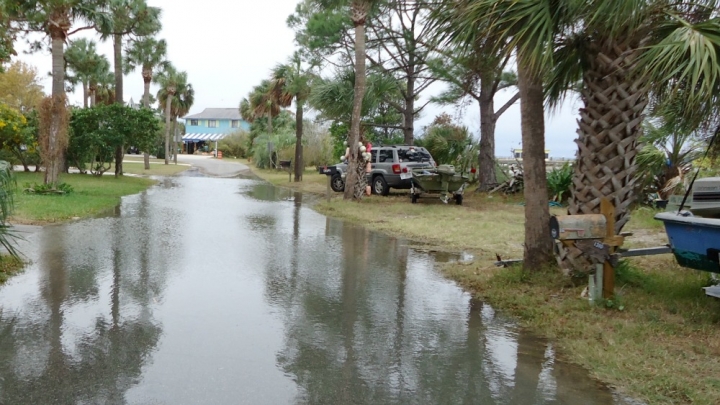 The meeting was held eight days before world leaders were due to converge in New York this Friday to ratify a United Nations treaty, aiming to avert the worst impacts of climate change. If the treaty succeeds, Tybee Island and other coastal communities may flood terribly in the coming decades, but will most likely remain mostly above sea level, recent Antarctic modeling suggests. Vast scientific uncertainties, however, mean even that cannot be assured.

Mayors from small towns, planners from the world’s largest cities and U.N. diplomats are being guided on the details of a looming coastal crisis by sea level projections compiled by a U.N. science panel. The panel’s work includes warnings about the amount of flooding that could be caused by melting in Antarctica, and those warnings have been growing bleaker.

The barren continent — the planet’s greatest reservoir of ice — remains shrouded in frigid mystery, and a lack of scientific knowledge about its ice sheet means scientists can’t yet predict how much flooding it could cause as temperatures continue to climb. A recent study, though, added to concerns that it could begin disintegrating, inundating coastal neighborhoods around the world, unless the heady goals of the new U.N. climate pact are achieved.

The Intergovernmental Panel on Climate Change’s most recent findings, from three years ago, appear to have underestimated the potential seriousness of the Antarctic problem, with sweeping implications for the urgency of pollution cuts — and for the futures of coastal communities like Tybee Island’s.

Instead of the anticipated several feet of sea level rise this century if current pollution rates continue, the latest modeling-based science warns that melting could lead to twice that amount. That sobering estimate is a rough one.

If the Paris agreement fails to substantially curb global warming, the latest projections suggest places like Tybee Island, which has an average elevation of less than 8 feet, could effectively be doomed.

The new U.N. climate treaty, which was negotiated in Paris in December, sets ambitious goals for curbing global warming. But countries have not yet committed to take the necessary steps under the new treaty to actually realize those goals. The pact is expected to be ratified Friday by more than 160 nations.

The oceans are rising globally by about an inch per decade — and that rate is hastening as carbon dioxide, methane and other greenhouse gases continue to warm the planet’s surface. Global temperature records were set in 2014 and again in 2015, and in each of the first three months of 2016 due to global warming and a strong El Niño.

East Coast sea level rise has recently been worse than elsewhere, amplified by natural geological processes and by regional changes to ocean currents. The only road on or off Tybee Island, U.S. 80, a low-slung highway over marshes that runs into Savannah, which is 15 miles to the west, flooded an unprecedented 23 times during high tides last year, blocking commuters and cutting off emergency vehicles.

State and federal agencies are working on plans to widen the highway, and Buelterman hopes to convince them to raise it at the same time. “Data has shown that the road floods much more frequently than it did 60 years ago,” he said.

Unless steps are taken to protect the road, the flooding is projected to continue to get worse. The town is also considering building dunes to protect roads and homes from worsening storm surges.

Even as humanity slips into a flooding crisis of its own making, however, scientists can’t pinpoint how much worse the flooding will become. That’s partly because scientists don’t know how much climate pollution will be released during the decades ahead. But it’s also because they’re still trying to figure out how ice sheets in Greenland and Antarctica will be affected by warming.

“There’s a huge amount of unknowns,” said Gavin Schmidt, director of NASA’s Goddard Institute for Space Studies, which is a leader in earth modeling.

The general consensus used to be that the Antarctic ice sheet should remain relatively stable even as the planet warms. Even so, seas were expected to rise a few feet this century as glaciers melt and as warming water expands, creating unprecedented flooding challenges.

Now, as the ice sheets begin melting, and as ice sheet modeling improves, the prognosis is getting worse.

“We already know that we’re in a danger zone in terms of sea level rise,” Schmidt said. “It’s not that anybody is thinking, ‘Oh, well, maybe the ice sheets will be fine.’ Nobody thinks that.”

The latest Antarctic ice sheet modeling research suggests the problem of sea level rise this century could be twice as severe as previously anticipated, fueled by the collapse of eroding cliffs of Antarctic ice.

In that paper, published last month in Nature, UMass professor Rob DeConto and Penn State scientist David Pollard developed an ice sheet model and used it simulate the effects of two processes they think could be crucial. Meltwater seeped into the ice sheet in the model and cracked it, exposing towering cliffs of ice that toppled under their own weight into the Southern Ocean.

The results, however, were highly tentative. “It’s very much not the last word on this,” Schmidt said. They were the latest trickle of information in a growing gush of findings as climate scientists strive to solve what may be the biggest single mystery currently facing them.

When DeConto and Pollard simulated the effects of high rates of future climate pollution, the Antarctic ice sheet dumped enough ice into the Southern Ocean to raise sea levels by several feet by 2100 (that’s in addition to sea level rise caused by other factors), and by about 40 more feet by 2500.

“If we were to let a big fraction of the ice sheet disappear and go into the ocean, it will be millenia before it grows back,” DeConto said. “It’s a really long-term commitment to these elevated sea levels”

When DeConto and Pollard kept pollution levels in their ice sheet models low, the collapse of the ice sheet was largely avoided in most simulations, though not all of them.

The main question is no longer whether the ice sheets in Antarctica and Greenland will melt. It’s how quickly the changes will occur. That’s a difficult question to answer based on limited observations that are available from one of the remotest, coldest and least accessible parts of the world. 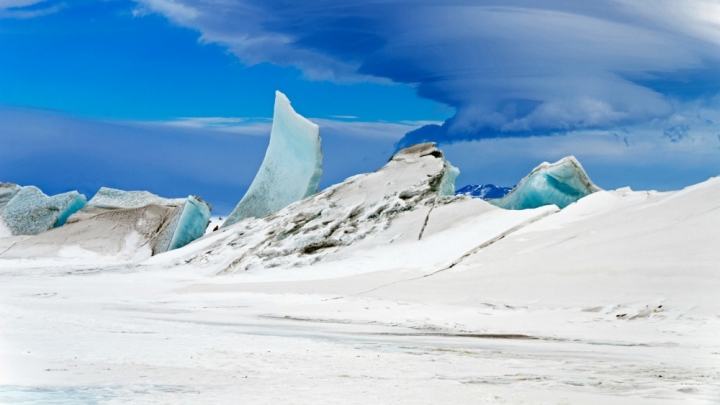 Scientists are trying to figure out how Antarctica will respond to warming temperatures.
Credit: Michael Studinger, NASA/Flickr

“As we learn more, we’re finding that the changes could be greater and more rapid than we previously thought,” said Penn State atmospheric science professor Michael Mann.

Clues for the future of a warming world are being culled from research into prehistoric coastlines that now sit dozens of feet above current sea level. They date back to periods when natural fluctuations pushed temperatures to levels that appear analogous with those of today.

“We know, with reasonable confidence now, that we have destabilized enough ice, such as through the melting of the west Antarctic ice shelves, to eventually give 10 to 14 feet of sea level rise,” Mann said. “What’s less certain is how quickly that could happen.”

More than five inches of sea level rise in the 20th century led to regular high-tide floods across the East and Gulf coasts, where erosion and subsiding land worsen the problem. It also amplified the crippling effects of Hurricane Sandy’s storm surge.

The seas are rising faster now, which could affect more than 100 million Americans and billions of coastal residents of other countries during the decades to come, requiring heavy spending on the replacement, protection and retrofitting of coastal roads, pipelines and neighborhoods.

Climate science is advancing with extraordinary speed as global teams of physicists, ecologists, oceanographers and geologists collaborate to address unanswered questions. Diplomatic procedures and science journals are struggling to keep up.

Ice sheet models still “have a long way to go before they’re fully credible, but they’re improving” said Princeton professor Michael Oppenheimer. “Modeling has progressed a lot in the last 10 or 15 years, and you’re seeing in the DeConto and Pollard paper the fruits of some of that progres.”

Such ice sheet models were not used in a prominent paper that was published this month in the European journal Atmospheric Chemistry and Physics by a team led by Hansen, the former NASA scientist. That paper warned of apocalyptic consequences from ice sheet melting this century. It was an unconventional 41-page narrative written mostly by Hansen, with additional contributions from 18 other scientists, many of whom reviewed drafts or provided specialized knowledge. There’s also 11 pages of footnotes.

“The Hansen paper has an extra level of speculation,” Oppenheimer said. “The way I read it is as an interesting scenario, where a lot of worst-case outcomes are concatenated to produce a worst, worst, worst case possibility. It’s a nightmare which is very unlikely to actually come true.”

The paper’s findings rest on a key assumption — that the rate of melting of Antarctic ice will be exponential rather than gradual. The research doesn’t investigate whether that assumption is correct.

“It’s a reasonable hypothesis, I think,” said Hansen, who now oversees a program at Columbia University that aims to raise awareness about solutions to global warming. “We don’t want to wait until it’s completely proven.”

The paper draws on hundreds of studies to investigate potential impacts of such rapid ice sheet melting, including ocean circulation changes, superstorms and virtually incomprehensible levels of flooding. 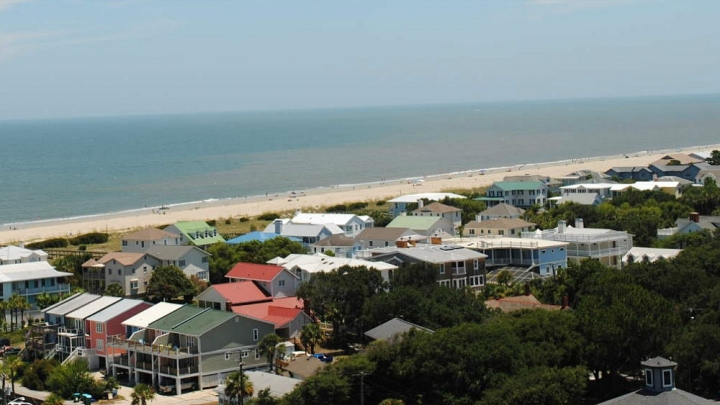 While Hansen focuses on a worse-case scenario, other scientists are trying to determine the likelihood of such a scenario playing out in real life. Better understanding heights of prehistoric shorelines is considered key for honing science’s projections for future sea level rise.

“We’re using these models to predict the future, and one of the best ways to evaluate them is to ask, ‘Do they capture what happened in the past?’ ” Columbia University professor Maureen Raymo said. “So you have field geologists like myself who are trying to unravel the history from the rocks.”

Raymo is planning research in Western Australia later this year that could help determine whether seas rose to 25 feet above today’s levels prior to an ice age, which appears possible based on fossils of corals that grew a little more than 100,000 years ago. Periods of high sea levels are called highstands.

If the highstand turns out to be real, and if the Paris climate pact fails to abruptly slow humanity’s release of climate pollution into the atmosphere, then places like Tybee Island could become almost entirely uninhabitable this century. Similar fates could befall island nations and other shoreline regions elsewhere in the world, producing millions of climate refugees in need of new homes.

“You don't want that scenario to come into play,” said Jason Evans, a Stetson University sea level rise scientist who has been working with Tybee Island officials to analyze sea level risks and draft strategies for coping. “The only way to adapt to that is for it not to happen.”

You May Also Like:
Warming Means Nicer U.S. Weather, But It Won’t Last
Studies Show Link Between Red Meat and Climate Change
Bleaching Has Hit 93 Percent of the Great Barrier Reef

Editor’s note: Michael Oppenheimer is a member of Climate Central’s board, but has no role in its editorial content.