SACRAMENTO COUNTY, CALIF. — Leo Van Warmerdam pointed to a red shed housing a large generator on his family’s dairy farm as he loped over two acres of manure. The thick black plastic stretching across the manure ballooned as he walked on it, inflated by methane building from beneath. The cover seemed to be doing its job: It didn’t smell much different above the lagoon than it did elsewhere in this livestock-dominated swath of the Central Valley, just south of Sacramento.

Beneath the sun-parched plastic, microbes were breaking down the manure from about 1,000 cows into methane, which was being piped to the generator and burned to produce electricity.

These systems are called biogas digesters, and they’re helping to protect the climate from methane, which is a far more potent greenhouse gas than carbon dioxide. As the world’s appetite for meat and dairy has grown, agriculture has become a bigger cause of global warming than deforestation, and that’s mostly because of the methane released by livestock farming.

On Thursday, the Obama Administration laid out a 10-point plan for reducing climate pollution that focused on rural areas, including farms and forests. Key among those 10 points was a plan to encourage more farmers to install biogas digesters, and to support 500 more biogas installations at farms during the next decade. 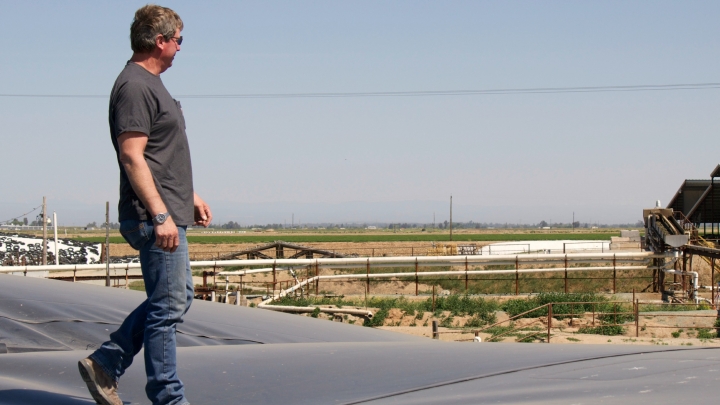 The government will partner with farmers to “significantly reduce” their climate impacts through “incentive-based initiatives,” U.S. Agriculture Secretary Tom Vilsack said during a speech in Michigan on Thursday. That would be done, he said, “while improving yields, increasing farm operation's energy efficiency, and helping farmers and ranchers earn revenue from clean energy production.”

The initiatives should help reduce the more than 2 million tons of methane released by American livestock farming every year. But 500 biogas digesters would be a drop in the proverbial bucket.

The EPA concluded in 2010 that such systems are “technically feasible” at more than 8,200 American dairy and swine farms, and that they could also be used at some poultry operations. Yet fewer than 200 had been installed nationwide, with high costs found to be a primary reason for the tardy uptake.

Biogas digesters produce a useable and tradeable commodity — energy — but installations on smaller farms rarely produce enough of it to pay for themselves. In California, a cap-and-trade system that charges polluters a fee for releasing carbon dioxide is helping to close the financial viability gap.

Construction of biodigesters in California starts at around $1.5 million for the smallest farms. Thursday’s announcement by the White House, combined with the continued growth of cap-and-trade systems, should help farmers overcome some of these high costs.

California’s cap-and-trade system requires large climate polluters, including power plants and gasoline suppliers, to purchase permits that allow the release of climate-changing carbon dioxide. The allowances sell for a little more than $12 per ton of carbon dioxide, with about $1 billion a year in revenue being spent on green projects. Revenues are projected to grow in the coming years, even as the cap on the number of allowances available is shrunk to help the state meet its ambitious climate-protection laws.

But the agricultural and forestry sectors, and methane pollution and ozone-depleting greenhouse gases are not directly regulated by the scheme. So California gives polluters that are regulated by it an option. If they can find a cheaper way of keeping the equivalent of a ton of carbon dioxide out of the atmosphere, by spending on certain types of forestry, agricultural or industrial projects, then they can use carbon offset credits from those projects instead of allowances to permit the release of up to 8 percent of their pollution.

Farmers work through agents to sell their offset credits. The farmers can build their own biogas systems, or they can farm out the job to specialists. Van Warmerdam does the latter. He leases land to an operator for an undisclosed amount. “We’re diversifying our income,” he said. “It’s worthwhile. There’s no risk to me.”

The operator, Daryl Maas, sells electricity from the burning methane to the local utility. He’s also working with a broker who will sell offset credits produced by the project to Californian polluters. When he operates in Washington state, Maas instead sells such offsets to voluntary programs, such as those that offer to offset the climate impacts of a long flight or a corporation’s operations, though those bring in considerably less cash.

Maas says such offsets can provide as much as a quarter of a biogas system’s revenue. “You can’t build the whole project around it,” he said. “But it’s a nice, welcome addition.”

Carbon offsets like those allowed in California are common in cap-and-trade systems, which are rapidly growing in popularity worldwide. But offsets are controversial. Critics question why a farmer like Van Warmerdam should receive public funds for a project that might have been built anyway. Indeed, Van Warmerdam says he had been trying to install such a system for nearly a decade before cap-and-trade began a couple years ago. He was stymied twice — not directly by financial issues, he says, but by problems with contractors. “It never made it to the building stage,” he said. 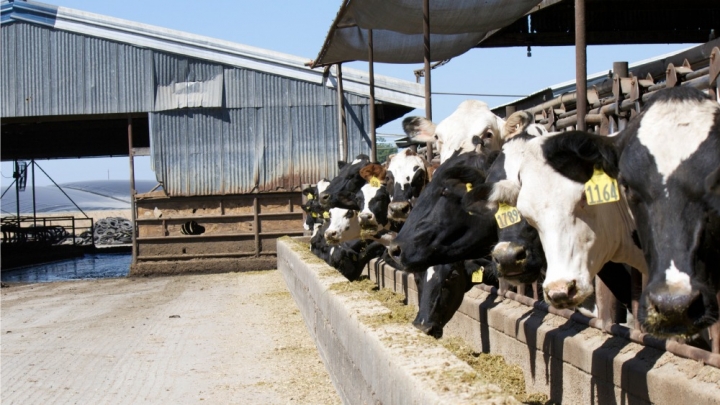 Manure from the Van Warmderdam family's cows flows into a covered lagoon, seen on the other side of the shed, where it turns into methane.
Credit: John Upton

Two environmental groups, the Citizens’ Climate Lobby and Our Children’s Earth, sued California to try to block the use of offsets, which they argued lacked integrity and could be abused. Another environmental group, the Environmental Defense Fund, which has expressed confidence in the integrity of the cap-and-trade system’s verification system, has been helping California defend itself in court.

A San Francisco Superior Court judge ruled against the lawsuit two years ago, pointing to research indicating that fewer than 10 percent of the 8,200 biogas systems that could be installed in the U.S. would be installed without offset credits.

“It is not standard practice to install anaerobic digesters,” Judge Ernest Goldsmith wrote in his ruling. “Cost is the primary barrier to installing digesters and offset credits directly address this problem.” The California State Supreme Court is due to decide whether it will hear an appeal filed by Our Children's Earth.

California’s cap-and-trade began operating in early 2013 — just as Maas was building the biogas system on the Van Warmerdams’ farm. He says the young age of the cap-and-trade program, combined with uncertainty over the future of its rules, can make it difficult to rely on stable revenues from carbon offsets allowed under it. “It will just take a while to mature,” he said. “But, already, there’s a market there.”

California’s cap-and-trade program is set to expire in 2020. Lawmakers are expected to renew it before then, but it’s impossible to say what changes might be introduced along the way.

“You can’t execute a project beyond 2020,” Maas said. “The price is really the biggest question mark. What’s the price of carbon going to be? That’s determined by regulation.”

Many of the questions on Van Warmerdam's mind, meanwhile, had related to whether biogas systems would eventually become mandatory.

“I see that some day they’re probably going to force you to put these things in,” he said.

That helped spur him to join the hundreds of pioneering American farmers who are already using grants and carbon offset revenues to turn waste manure into a commodity — instead of being knee-deep in an environmental menace.

You May Also Like:
Looking for Global Warming? Check the Ocean
White House: Upgrade Grid to Withstand Climate Change
Scientists Turn to Drones For Closer Look at Sea Ice
Expectations High For Climate-Changing Coolant Talks
China Can Cut Cord on Coal (Mostly) by 2050