Picture This: Fall Snow and Bizarre Clouds Over NYC

The signs of fall continue to flourish, but the weather isn't all clear skies. Some intimidating clouds rolled over New York City early in the week, just as the first snows of the season fell on some of Colorado's peaks. Across the pond, torrential rains flooded a city in southern France, while in the Pacific, yet another typhoon took aim at Japan. All of these events yielded some of the best weather and climate images of the week.

As we’ve noted in the weeks since fall officially began, tree leaves are beginning their annual transformation from verdant green to blazing orange, red and yellow. The color change starts at higher latitudes and elevations first, including the Rocky Mountains in Colorado. This week, those brilliant leaves stood in stark contrast to a sight most associate with winter: the first snowfall of the year.

A low pressure system rolled into western Colorado early in the week, bringing rain to many areas, but snow to higher elevations, including Crested Butte and parts of the San Juan Mountains. Several photos showed the stunning contrast between the stark white snow-capped peaks and the fiery treetops.

No Need to Panic…

New Yorkers headed into work on Monday morning spied some gnarly looking clouds looming over the city. As Dennis Mersereau over at Gawker’s The Vane put it in the title to his post on them, “What Were Those Horrifying Death Clouds Over NYC This Morning?”

While the clouds looked ominous, they were actually nothing to worry about.

The spectacle looks like it was made up of two layers of clouds he said, a high, wavy blanket of altostratus over normal cumulus clouds. The clouds did bring some rain to Midtown, but other than that, the city was unscathed.

Over the course of just three hours, between 2 and 5 p.m. local time, a whopping 10 inches of rain fell on the area.

The torrential rains caused the River Lez to overflow its banks and led to scenes shared on Twitter of buildings and vehicles under water — in one photo, a swan even paddles down the road.

Another Typhoon Takes Aim at Japan

This weekend, Typhoon Phanfone, currently spinning over the western Pacific Ocean south of Japan, could become the third typhoon to hit the country this season.

Phanfone rapidly strengthened on Thursday from the equivalent of a tropical storm to that of a strong category 3 or perhaps even a category 4 hurricane, the Capital Weather Gang noted. An image taken by the Suomii NPP satellite showed the strong core of the storm. 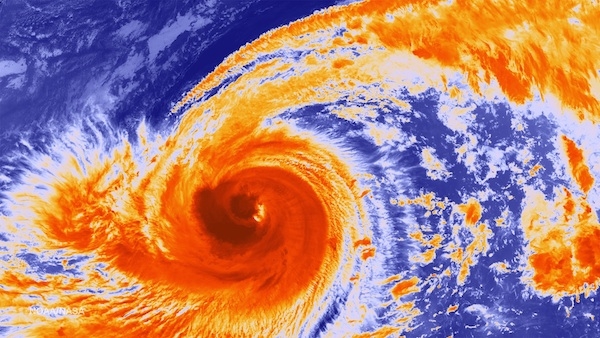 Typhoon Phanfone over the western Pacific Ocean as seen by the high-resolution infrared channel on the Suomi NPP satellite.
Click image to enlarge. Credit: NOAA

The typhoon could strengthen further over the coming hours, but is expected to encounter colder waters and higher wind shear as it nears Japan. Its exact course is uncertain, as well. Current forecasts have it turning northward before making a sharp jaunt eastward, just edging past the main Japanese islands. But it could make that eastward turn later than expected, in which case it would make a direct hit on the islands.

October is traditionally one of the most active months for tropical cyclones (the collective term for hurricanes, tropical storms and typhoons), the U.K. Met Office notes. Last October, there were eight such storms in the region, with most developing into strong typhoons.