Over this past weekend, a major storm swept across the U.K. and dumped torrential amounts of rain in some spots — the more than 13 inches that fell in one location in northwest England even set a national 24-hour rainfall record. 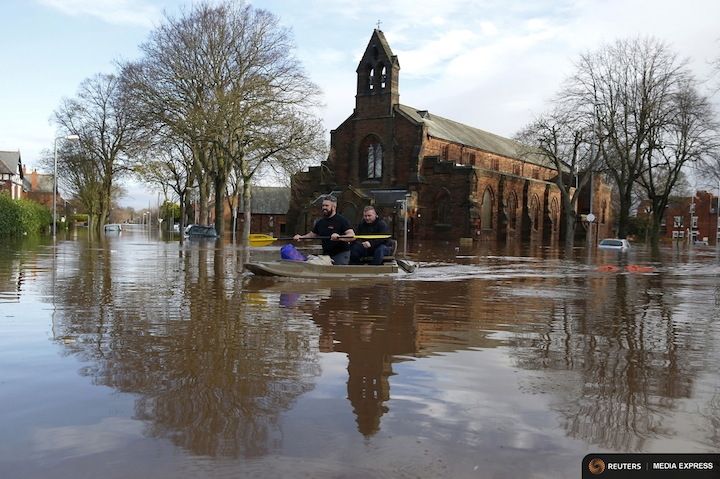 Local residents canoe through flood water as they help to rescue people on a residential street in Carlisle, Britain on Dec. 6, 2015.
Credit: REUTERS/Phil Noble

Just days later, a real-time analysis by scientists working with Climate Central’s World Weather Attribution program has found that global warming has boosted the odds of such an extreme rainfall event in the region by about 40 percent — a small, but clear, effect, the scientists say.

The finding is particularly noteworthy because the results of studies looking at the potential role of climate change in extreme precipitation have been a mixed bag, especially compared to heat waves, which have a much simpler and clearer connection to warming.

Storm Desmond, as it was named by the U.K. Met Office and Ireland’s Met Éireann, blew over the British Isles from early Friday, Dec. 4 to early Sunday, Dec. 6, bringing gale-force winds and exceptional rains. The hardest hit areas were northwest England and southern Scotland, where the mountainous terrain helped wring out even more rain, leading to some extremely high local amounts.

The deluge led to the flooding of more than 5,000 homes and businesses in the region and left some 60,000 people without power.

Such heavy downpours are expected to become more common and more intense as the world heats up, because a warmer atmosphere can hold more moisture. But other factors, like changes to the flows in the atmosphere that help guide storms, can also come into play. For some places, changes in atmospheric circulation may mean fewer storms that could bring such extreme rains.

The WWA analysis factored in both types of changes, examining how warming changed the odds of such an extreme event using three independent methods. For the first, Geert Jan van Oldenborgh of the Royal Netherlands Meteorological Institute (KNMI) used a statistical analysis of historic rainfall observations that looked at how the frequency of such an event has changed from the past, before a warming signal clearly emerged, to the present.

For the second, van Oldenborgh used a global climate model to effectively generate more than a dozen artificial historical records for the broad area affected and again looked at how the frequency changed. 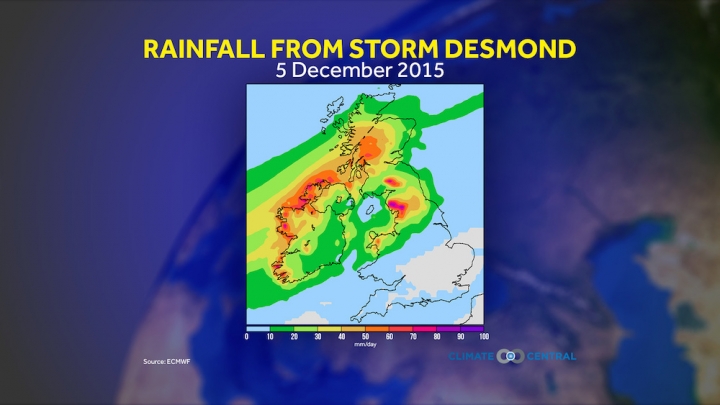 And for the third, University of Oxford scientists took thousands of iterations of a regional climate model and compared the frequency of such an event in the current climate to one without warming.

The results from all three methods were remarkably similar — the team was actually surprised by how similar they were, Oxford’s Friederike Otto said.

The team found that warming had increased the chances of such extreme rainfall from a storm like Desmond in the region by about 40 percent, with a full range of between 5 and 80 percent. The full analysis has been submitted to the journal Hydrology and Earth System Sciences.

The analysis doesn’t break down the relative contributions of increased moisture in the atmosphere and changes to its circulation, but there does seem to be some influence from the latter, because the overall boost was more than what would be expected from increased moisture alone, Otto said.

The study also didn’t address other factors that have a significant influence on flooding and its effects, such as homes being built in floodplains and infrastructure like paved surfaces that can cause more water runoff.

But such work can help inform officials when making decisions about how to adapt to future threats.

“Extreme event attribution can provide valuable information to decision-makers faced with tough questions about changing risks,” Maarten van Aalst, director of the Red Cross Red Crescent Climate Centre in The Hague, and a partner to the WWA program, said.