Just three years ago, the U.S. saw a tornado season so active that one forecaster called it “shockingly extreme.” The 1,691 tornadoes reported in 2011 were the second most for any season on record, and April of that year saw the highest monthly tornado count, with 758 recorded twisters. 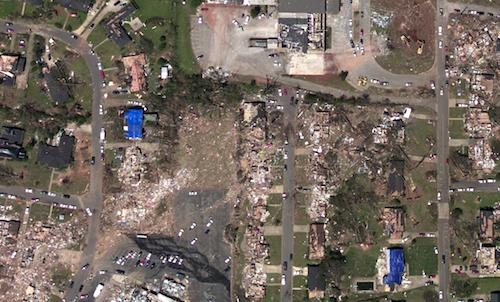 An aerial photograph of the damage to Tuscaloosa, Alabama, in the vicinity of the intersection of 15th St. E. and McFarland Blvd. E., wrought by one of the tornadoes that struck the area on April 27, 2011.
Credit: NOAA

In stark contrast, 2014 is on pace to set record-low numbers. Only 109 tornadoes have been reported to date, according to preliminary numbers that will likely be reduced.

“It’s looking like the slowest start to tornadoes in any year that we have records for,” said Greg Carbin, a warning coordination meteorologist with the Storm Prediction Center of the National Oceanic and Atmospheric Administration in Norman, Oklahoma.

But while they can chart the tornado numbers, Carbin and his colleague Harold Brooks have “no explanation” for what’s behind this wild swing in tornado activity in just a handful of years. That hasn’t stopped them from looking for one, though, including the possibility that climate change is playing an unrecognized role.

“We’ve been scratching our heads for awhile on what is driving this extreme sort of behavior,” Carbin said.

One Extreme to Another

As winter’s chill gives way to the budding of flowers and trees and the longer daylight hours of spring, those in the part of the country informally known as Tornado Alley know to be wary for the wild weather spring can also bring.

But this year has been strangely quiet. A mere 20 tornadoes of EF1 strength or higher on the Enhanced Fujita scale have been reported through April 21. By the same point in 2011, a whopping 465 tornadoes had been recorded. And that was before the epic outbreak of April 27, 2011, when another 199 tornadoes touched down in 14 states, mostly in the Southeast, and 316 people were killed.

2014 marks a new low in tornado activity through April 21 of any year going back to 1953, with only 20 EF1 tornadoes reported for the year by that date.
Click image to enlarge. Credit: G. Carbin, NWS/Storm Prediction Center

The U.S. has gone 159 days without a tornado rating an EF3 (which denotes a severe tornado on the EF scale, which goes up to EF5). That places 2014 in fourth place for the years with the longest streaks between major tornadoes and record-keeping goes back to 1953. The last EF3 tornado was in November, and though there are other years with longer overall streaks, this year is notable because “this span is continuing so far into the springtime,” Carbin said. The record longest streak, which began in July 2013 and lasted 249 days, ended in late March.

The same atmospheric pattern that has kept the eastern U.S. in a deep freeze through the winter and into spring accounts for much of the tornado “drought,” as it has kept the warm, moist air that helps fuel thunderstorms and tornadoes down in the Gulf of Mexico — the Gulf Coast is one of the few parts of the country that has seen any tornado activity this year.

Cold winters are known to quash tornado formation, so a relatively slow start to the season was not unexpected, but “this was certainly on the low end of even those expectations,” Brooks, a senior scientist with the National Severe Storms Laboratory said.

The slow 2014 “is as unusual as that activity on the high side in 2011,” Carbin said. He and Brooks have begun scouring the tornado records to look for trends in tornado activity to see what might be causing them.

After the record heights of 2011, the years that followed have overall seen dampened activity, despite major tornadoes like the one that struck Moore, Oklahoma, last year.

“We’ve been on a slow streak for a couple years now,” Carbin said.

Years have always varied in terms of the sheer number of tornadoes, but in general they have fallen within a confined range. It has only been in the past decade or so that Carbin and Brooks have started seeing tornado counts that have deviated well outside of the historic bounds.

In addition to total tornado numbers, they have looked at trends in when the tornado season starts, which has also shown fairly wild swings. Though the average start date hasn’t changed, recent decades have seen more early ramp-ups of the tornado season, as well as the six latest starts.

At 152 days on April 18, 2014, the span between EF-3 or stronger tornadoes is the 4th longest span between in the last 60 years.
Click image to enlarge. Credit: G. Carbin, NWS/Storm Prediction Center

Carbin said changes in tornado reporting don’t seem to account for these trends, which “means it must be something to do with the underlying meteorology and climatology,” he said. But teasing out exactly what that underlying mechanism or mechanisms are and quantifying their effect is difficult, he said.

Temperature — certainly a prime concern in a warming world — does seem to influence tornado activity. When winter months are warmer than normal, there tend to be more tornadoes than average, while the opposite is true of colder winters, “like we’ve seen this year and last,” Carbin said.

Warmer summer months, on the other hand, see fewer tornadoes than average. This relationship also isn’t a surprise, as warmer summer months are typically associated with a high-pressure ridge camping out over the middle part of the country, which doesn’t provide the instability and moisture that tornadic storms need to get going.

“It’s very hard to get organized thunderstorms in that regime,” Carbin said.

But what role global warming plays in any of these trends is unclear.

“That's the $64,000 question,” Brooks said. “We really need to come up with a physical link between the large-scale environmental conditions (which would presumably be impacted by warming) and the variability. Without that physical link, it's really hard to predict how things will change.”

While the search for answers continues, the streak of quiet days will not, given an expected bout of severe weather across the Heartland this weekend.

The Storm Prediction Center has said that a “significant multi-day event” is expected Sunday and Monday, and that “strong tornadoes are possible.”

The area likely to be affected includes the Central and Southern Plains and the Mississippi Valley on Sunday and moves into the central Gulf States on Monday. The major metro areas possibly under threat include Dallas, Kansas City, Tulsa, Oklahoma, Memphis, Birmingham and Baton Rouge.

This possible outbreak shows that the overriding atmospheric pattern may finally be changing, with warm Gulf air allowed to move further up over the continental U.S.

“We’re starting to get into the regime that suggests the potential [for tornadoes] would increase,” Carbin said. And while that will add to the tornado count for the year, “that’s not going to get us anywhere close to normal,” he said.

When normal will resume is anybody’s guess, as tornado seasons can’t be predicted in advance. But Carbin knows one thing: “I hope it’ll be a long time before we see something like 2011 again.”

You May Also Like
Storm Surge Could Flood NYC 1 in Every 4 Years
New Ways to Visualize Increasingly Hot Weather in U.S.
Carbon Capture Faces Hurdles of Will, Not Technology
Oklahoma Utilities Hit Homes Using Solar With Extra Fee