Tornadoes have a tendency to grab the headlines, but the torrential rains that can accompany severe storms can do just as much damage or worse, as photos of washed out roadways and homes from Pensacola, Fla., and Mobile, Ala., have made clear. And as Earth’s temperature warms and its climate changes unabated, these kinds of extreme precipitation events are on the rise. 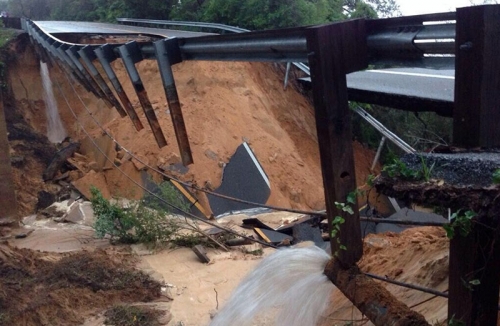 A washed out section of Pensacola's Scenic Highway.
Credit: @BrantlyKeiek/twitter

The same widespread storm system that set tornadoes spinning across the landscape from Arkansas to North Carolina this week also deluged the Gulf Coast from Mobile to Pensacola with more rain falling in a single day than both locations usually see in March and April combined. An estimated 10 to 15 inches of rain fell in the area in just 24 hours, with rates in Pensacola at one point on Tuesday night reaching an incredible 6 inches in one hour.

The atmosphere over the area was soaked with moisture, which the storm system pulled from over the warm Gulf of Mexico, fueling the barrage of rain. It is this very issue that will cause more such heavy downpours in the future.

Greenhouse gases, such as carbon dioxide, are of course accumulating in Earth’s atmosphere — in fact, concentrations of carbon dioxide averaged over 400 parts per million for all of April, the first time in human history that has happened. As they do so, the planet’s average temperature is warming; it has already rise 1.6°F since the beginning of the 20th century, and could rise as high as about 8.5°F above 1986-2005 levels, according to the most recent Intergovernmental Panel on Climate Change report. As temperatures rise, “the other thing that kind of goes right along with that is the increase in atmospheric water vapor content,” said Kenneth Kunkel, a climate scientist with the National Climatic Data Center. “We have an atmosphere that essentially has more juice in it.”

That extra “juice” weights the dice toward these extreme precipitation events, even in places that are expected to dry out over the next century, such as the Southwest. Though those places may see fewer rainstorms on average, the ones they do receive will feature more concentrated bursts of rain because they “will have more water vapor to work with,” Kunkel said.

“There’s no place for the U.S. where the models aren’t, on average, showing an increase in extreme precipitation,” Kunkel told Climate Central.

And the trend isn’t just something expected in the future — it has already been observed in the U.S., especially over the past 30 to 50 years, according to the draft report of the National Climate Assessment, of which Kunkel is an author. (The final version of the report, put out by the U.S. government, will be released on May 6.) 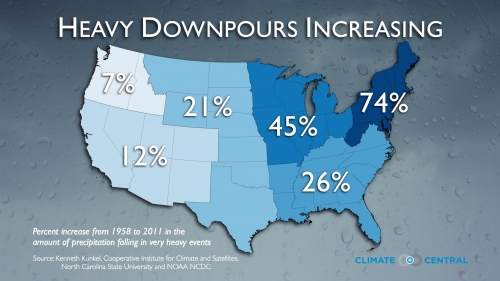 The percentage increase in extreme precipitation events in different regions of the United States from 1958 to 2011.

Since 1991, the amount of rain falling in heavy events has increased in every part of the country except Hawaii, the report says, with the greatest increases seen in the Northeast, Midwest and Great Plains.

Other examples of recent deluges include a 1-in-1,000 year event that caused major flooding in Boulder, Colo., in September 2013, and rains that soaked Calgary, Alberta, in June of that year.

Linking those events or this week’s rainfall, like any specific weather event, to climate change is of course problematic, and as Kunkel said, these events do happen naturally. “We’ve seen these kinds of things in the past; we’ll see these things in the future with or without global warming,” he said.

But measurements show there is more water vapor in the atmosphere than there used to be, and that is probably causing systems like this to produce a little more rainfall, Kunkel said.

The issue of increasing extreme precipitation brings with it a host of other problems, because such a large amount of rain falling in such a short timespan can overwhelm storm sewers and other infrastructure and saturates the ground so that it can’t absorb any more of the excess.

That happened in Pensacola and Mobile as rain-swollen waterways overwhelmed their banks — the Fish River in Alabama crested at a record 23 feet — and pooled on impermeable paved surfaces. The huge mass of water washed away roads and the ground underneath houses, as well as flooding many buildings. 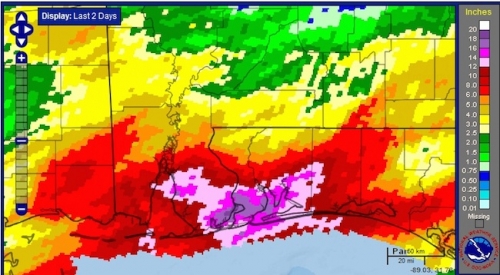 Flooding events in the Midwest and Northeast have increased in recent decades, the NCA report notes, and those increases are happening where the largest rises in heavy downpours are being seen.

The effect on infrastructure is something that communities will have to take into account as they continue to develop, particularly with the sewers, dams and other public works intended to divert floodwaters and keep people safe.

“If we increase the amount of rainfall in these heavy events, they may no longer protect us as much, and that’s probably something that should be considered as cities put in new infrastructure,” Kunkel said.