Extreme weather events such as droughts, heat waves and torrential rainfalls are the most powerful and obvious reminders that the climate is changing. These disasters were happening long before humans started pumping heat-trapping greenhouse gases into the atmosphere, but global warming has tipped the odds in their favor. A devastating heat wave like the one that killed 35,000 people in Europe in 2003, for example, is now more than 10 times more likely than it used to be.

But that’s just a single event in a single place, which doesn’t say much about the world as a whole. A new analysis in Nature Climate Change, however, takes a much broader view. About 18 percent of heavy precipitation events worldwide and 75 percent of hot temperature extremes — defined as events that come only once in every thousand days, on average — can already be attributed to human activity, says the study. And as the world continues to warm, the frequency of those events is expected to double by 2100. 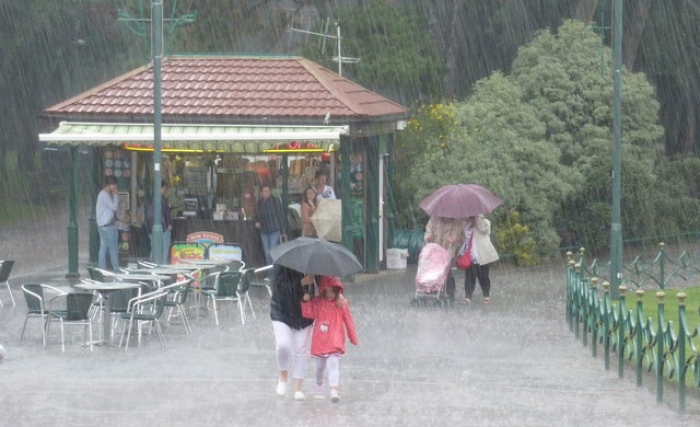 A heavy downpour in Bournemouth on the south coast of England.
Credit: Chris Downer

The new research differs from other so-called extreme event attribution studies, not just in its broad-brush approach, but also in how the term “extreme” is defined.

The 2003 heatwave that killed so many people in Europe, for example, was so off the charts that it would ordinarily be expected to come along only once in a thousand years without global warming. By contrast, the hot temperatures and heavy precipitation events described in the new paper would normally come along once in every three years, with both “hot” and “heavy” varying depending on what's normal for a given location. “We think of these as ‘moderate extremes,’ ” lead author Erich Fischer, of the Swiss Federal Institute of Technology in Zürich (ETH Zürich), said.

Because these moderate extremes are by definition more common, and because the authors looked at global statistics rather than those for highly localized, rare events, the conclusions are extremely robust, said Peter Stott, leader of the Climate Monitoring and Attribution Team at the Met Office Hadley Centre, in the U.K. “I think this paper is very convincing,” said Stott, who was not involved in the research.

It’s also valuable, he said, because even moderate extremes of hot temperatures and precipitation, can have significant local impacts. “Policymakers need to know what’s happening overall in terms of exposure.”

To calculate how the frequency of local extremes has changed as a result of global warming, Fischer and his co-author, Reto Knutti, also at ETH Zürich, fed data from tens of thousands of locations around the globe into 25 state-of-the-art global climate models, then combined the results to see how the current frequency of moderate extremes compares with what would have happened in the absence of climate change.

They also projected forward in time to see how the frequency of extremes is likely to change. Not surprisingly, they’ll increase as the planet continues to warm. But as Fischer said, “the increase is nonlinear. An amount of warming that doesn’t seem so dramatic — say, from 1.5°C above pre-industrial temperatures to 2°C — will double the number of extreme events.” It won’t be the same everywhere, Fischer said. “But on average, that’s what we see.” 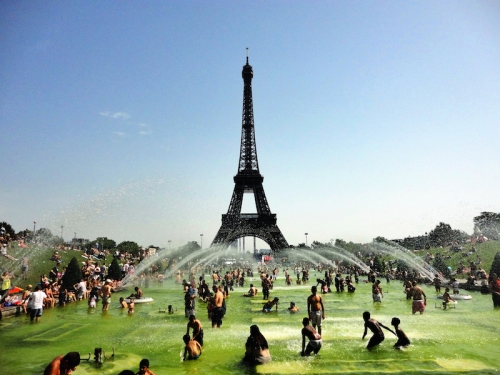 Parisians beat the heat by playing in the fountain.
Credit: Chris Walts/flickr

The planet is about 1.4°C warmer than it was before human greenhouse emissions began to climb in 1800 or so, and while policymakers have identified the 2°C level as a red line the planet shouldn’t cross, it’s now considered unlikely that this can be avoided.

By itself, the fact that these moderately extreme events will continue to come more often doesn’t tell people precisely what impacts they can expect on the local level. “We can give you probabilities for how the frequency of events will change,” Fischer said. “But we can’t tell you how much more damage they’ll do.”

For that, he said, you need to know how vulnerable each location is, and that can vary widely depending on how resilient the local population and infrastructure are to climate extremes. A city in the U.S., for example, or in Western Europe, might be able withstand extreme events more easily than one in, say, Bangladesh. “More work is obviously needed,” Stott said. “But this is a crucial first step.”