The lasting legacy of climate change will be heat. The land, the oceans, all of it. It’s the tie that binds and while the global average temperature is the defining metric, the increasing incidence of heat waves and longer lasting extreme heat is how the world will experience it.

All eight papers dealing with extreme heat events in this year’s Bulletin of the American Meteorological Society’s attribution report show a clear climate change signal that made them more likely, more hot or both. In fact, of the 22 studies scientists have submitted to the annual review over the past four years, only one didn’t find that climate change increased the odds or severity of extreme heat.

”​Global warming is the most obvious, well-documented effect of ​climate change,” Stephanie Herring, a climate scientist at the National Oceanic and Atmospheric Administration and organizer of this year’s attribution issue, said. “As a result, the signal is very strong so we can more easily detect it amongst noise of natural variability compared to other types of extreme events.”

In the case of a strong signal, 2014 stands out as particularly notable. It was the hottest year on record, though this year is on track to top last year’s record (and signs are already pointing to 2016 continuing the record heat parade).

The lift in background temperatures makes extreme heat more likely. “The underlying processes that relate climate change to heat wave intensity and frequency are fairly straightforward to understand: if you increase the average temperature by even a modest amount, then it turns out that you dramatically increase the area under the extreme positive ‘tail’ of the distribution,” Michael Mann, a climate scientist at Penn State who wasn’t involved in any of the new studies, said in an email.

Put another way, it’s like having Steph Curry on your basketball team. He doesn’t always guarantee a win, but he sure as heck increases the odds of a victory.

Unfortunately, rising temperatures are not a game and can have dangerous consequences. Heat at last year’s Australian Open had players hallucinating on the court and this year’s heat wave in India killed thousands. 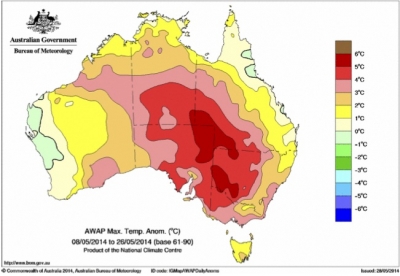 Researchers looked at heat waves and longer-lasting extreme heat events in Korea, Australia, Argentina, Europe and warm ocean temperatures in parts of the Pacific and Atlantic. In all cases, they found that climate change played a role in increasing the likelihood of extreme heat.

The May 2014 heat wave in Australia included some of the most dramatic results, with climate change increasing the likelihood an eye-popping, sweat-inducing 23 times.

For that study, researchers zoomed down to the city-level in Adelaide and Melbourne. Mitchell Black, the study’s lead author and Ph.D. student at the University of Melbourne, said it is likely the first time such a localized analysis has been done.

Climate change is also making extreme heat even hotter. It’s not just a game of odds when it comes to extreme heat, it’s also one of intensity. An analysis of Europe’s incredibly warm year in 2014 shows that human greenhouse gas emissions are responsible for roughly half of the extra warmth added to the system.

It’s tougher to tease out these intensity connections, but in addition to Europe’s hot year, the May 2014 Australian heat wave and a December 2013 Argentinian heat wave also got a boost in strength from global warming.

The findings could be moving from academia to the public discourse. The new findings show that it isn’t a question of if climate change is influencing extreme heat, it’s basically a question of how much of an influence it has on a particular event.

“Heat is the one ​event ​that is most ready for the ​science ​community to have a discussion of ​whether or not every heat ​attribution assessment​ necessarily​​ needs to go ​through the peer review process,” Herring said.

There are already some efforts underway to do get these types of analyses out to the public sooner rather than later, including World Weather Attribution, a project at Climate Central that involves the University of Oxford Environmental Change Institute, the Royal Netherlands Meteorological Institute, the University of Melbourne, and the Red Cross Red Crescent Climate Centre. Herring also noted an effort by the U.K. Met Office to do real time attribution of this summer’s heat wave in Europe as an example of government agencies providing that information directly.

One of the challenges remaining for the science is reducing the range of uncertainty around how much global warming is increasing the odds of extreme heat and whether 1-in-1,000 year events will now be 1-in-100 year events or 1-in-5 year events.

Society could benefit from improved climate change and heat predictions. With heat waves likely to continue increasing in frequency and intensity, their impact on people around the world will continue to grow.

For example, danger days — when the heat index tops 105°F — are becoming more common in the U.S. and are set to rapidly increase in just 15 years.

Herring believes that quantifying the extreme heat-climate change connection could be a next step to making these types of analyses useful to society.

“I don't think there is a lot of value from the perspective of decision makers to simply say climate changes impacted the risk of an extreme event,” Herring said. “But there’s a real opportunity to be able to deliver heat information in a more timely fashion.”