In the context of climate change and the environment as a whole, today’s crude oil and natural gas boom is the ultimate mixed bag.

A new study from a team of researchers at Stanford and Duke universities, as well as other institutions, weighs the good with the bad of oil and gas development: Natural gas development and consumption, especially for producing electrical power, can boost local economies while reducing air pollution from coal-fired power plants and helping to wean the power grid away from sources of energy that emit huge amounts of climate-changing CO2 when burned. 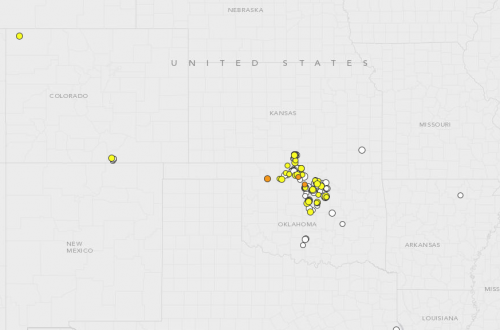 A USGS map showing all earthquakes in the central U.S. Magnitude 2.5 or greater occurring between Sept. 15, 2014 and Oct. 15, 2014. Oklahoma is both an oil and gas exploration and production hub and the site of earthquake swarms scientists believe have been caused by energy companies injecting large quantities of waste water deep into the ground. The earthquakes shown in southern Colorado are in the Raton Basin, another area where injection wells have been found to cause earthquakes.
Credit: USGS

But the list of environmental challenges fossil fuels development poses is a long one: Methane, a potent greenhouse gas, has been found leaking from oil and gas operations all over the country. Trains that carry crude oil from fields in North Dakota are prone to dangerous derailments. Fracking uses a lot of water in arid regions, and water contamination from fracking has long been a concern of people living near energy development.

The Stanford study, published in August in the Annual Review of Environment and Resources, also addresses another shaky issue about fossil fuels development that comes amid a flurry of new research connecting the same dots: Oil and gas operations, including fracking, can cause earthquakes. Some of them can destroy homes and injure people.

A U.S. Geological Survey study published this month found that underground injection of wastewater from a coalbed methane natural gas production field straddling the New Mexico-Colorado border has been causing earthquakes there since 2001. One of those quakes was a Magnitude 5.3 temblor that rattled southern Colorado in 2011.

“We’ve seen a number of damaging earthquakes already that have been related to waste water injection,” USGS geophysicist Justin Rubinstein, the study’s lead author, told Climate Central. “We can’t rule out the possibility that there will be larger earthquakes.”

He said the USGS is particularly concerned about the possibility of a major oil and gas-related earthquake striking a major urban area.

In another study published in July in the journal Science, Cornell University researchers found that “seismic swarms” of earthquakes in Oklahoma since 2009 — many of which were over Magnitude 3.0 — are likely being caused by deep underground injection of oil and gas related wastewater. A Magnitude 5.7 quake induced by oil and gas wastewater injection destroyed 14 homes in 2011 in Oklahoma.

Swarms of earthquakes continue to strike Oklahoma, making it one of the most seismically active areas in North America, even surpassing California in seismic activity.

USGS real-time earthquake data show that between 5 a.m. and 9 a.m. Oct. 15 there were three earthquakes in northern Oklahoma ranging in strength from Magnitude 2.9 to 3.3.

Over the past 30 days in Oklahoma, north Texas and southern Kansas, USGS data tally 156 earthquakes, the most severe of which were a Magnitude 4.3 near the oil and gas hub of Cushing, Okla., on Oct. 10 and a Magnitude 4.4 in Harper, Kan., on Oct. 2.

Hydrualic fracturing, or fracking, during oil and gas well development has been found to cause earthquakes, too.

A new study published Tuesday in the journal Seismological Research Letters shows that a swarm of 400 small earthquakes in 2013 in Ohio is linked to hydraulic fracturing, or fracking, the technique energy companies use to crack open underground rock formations to release trapped oil and gas into a well.

Fracking involves the injection of millions of gallons of water, sand and chemicals at high pressures thousands of feet beneath the surface, cracking open rock formations that hold crude oil and natural gas. Regardless whether a well is fracked, a lot of waste water, or “produced water,” comes up out of the wellbore. Energy companies often dispose of that water by injecting it deep underground.

All those fluids being injected can sometimes play havoc with faults, some of which may be long-dormant. 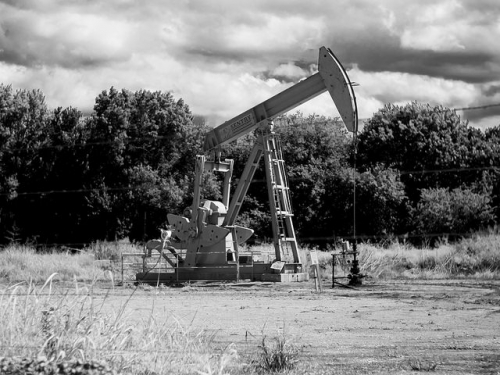 “It is well known by seismologists that fluid injection into the earth, of any kind, can sometimes trigger earthquakes,” said Ohio study lead author Paul Friberg, a researcher at Instrumental Software Technologies, a firm specializing in induced earthquake analysis. Friberg co-wrote the study with a team from the Ohio Department of Natural Resources.

“There are now several documented cases linking waste water injection wells to triggering earthquakes on pre-existing faults,” he said. “What is less well known is that fracking itself can also trigger earthquakes on faults, presumably through a similar mechanism.”

Friberg’s study showed that the process of fracking caused micro-earthquakes in Ohio ranging from Magnitude negative 3 to Magnitude negative 1 on the moment magnitude scale, the most modern method of measuring earthquakes based on the amount of energy released during seismic events. The new scale is expressed similarly to the Richter scale, which moment-magnitude readings replaced.

None of the Ohio quakes could be felt on the surface. The level of seismic activity depended on the level of fracking activity occurring at the time, likely triggering a slip in a pre-existing fault, the study says.

Rob Jackson, a professor of environmental earth system science at Stanford University and the lead author of the Stanford study, said the Friberg’s work confirms that fracking can cause small earthquakes.

“The tremors revealed a previously unknown fault right below the natural gas well,” he said.

There have been three documented earthquakes able to be felt on the surface that were linked to fracking, Friberg said.

That’s because fracking fluid is thought to lubricate faults, possibly causing them to slip, he said.

But many more earthquakes have been caused by waste water injection, as many as 188 nationwide in 2011, according to the Stanford study.

He said energy companies can try to prevent human-induced earthquakes by avoiding faults when they inject oil and gas wastewater into the ground and by not pumping fluids too quickly into the ground.

“You can reduce the risk of large earthquakes through careful monitoring and planning,” Jackson said. “You can’t make it zero, however.”