As 2014 comes to a close, Europe is virtually certain to lock in its hottest year in more than 500 years, and according to research by three independent teams of climate scientists, the record can be closely attributed to climate change. 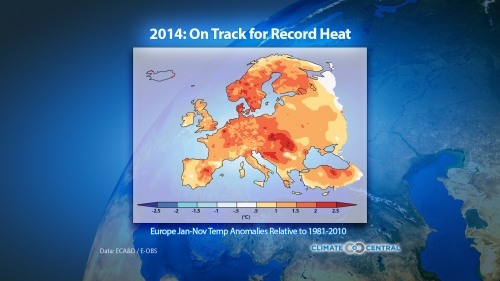 Temperature anomalies across Europe for the year from January-November, as compared to the 1981-2010 average.
Click image to enlarge.

The three groups, from the UK, the Netherlands and Australia, each using a different method, found that Europe should best its previous heat record set in 2007, and that setting that record has been made at least 35 to 80 times more likely by the manmade rise of greenhouse gases in the atmosphere.

“All the groups are concluding there is a very substantial influence of human caused climate change on increasing the chances of setting a new record in 2014,” said David Karoly, an atmospheric scientist at the Australian National University and one of the project researchers.

The three teams in this project — from the Royal Netherlands Meteorological Institute (KNMI), the University of Oxford, the University of Melbourne and the Australia National University — are working as part of a new initiative with Climate Central to examine extreme weather events and determine climate change’s role in them. In the past, extreme-event attribution took much longer to determine, but the new effort aims to establish any link between climate and extreme weather events much sooner after events happen.

Extreme heat events are one of the signature extremes expected in a warming world, according to climate model projections, be they a record hot summer in Australia or a record hot year for any part of the planet or the globe as a whole. And in general, the link between climate change and extreme heat is clearer and easier to discern than for other forms of extreme weather, such as extreme downpours or drought.

In this analysis of extreme heat, each team used different methodology and came up with slightly different numbers for the 2014 record projection and the likely role that climate change played, but all showed a heavy influence of manmade climate change on the recent heat records.

Globally, as well as in Europe, nine of the 10 hottest years ever recorded have all occurred since 2000. No annual cold record has been set in Europe since 1956 as warming is making hot years hotter and more frequent. No year has been record cold globally since 1911.

This year has been particularly warm, driven largely by extraordinary warming in large swaths of the Earth’s oceans.

Of course, the world doesn’t warm uniformly. In the U.S., for example, the eastern part of the country has had a fairly cool year while parts of the West are on pace for record temperatures. And many other parts of the planet have been baking, including Europe. 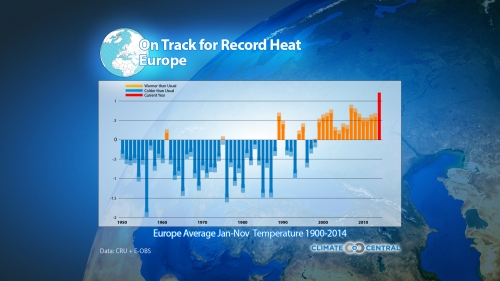 The January-November 2014 average temperature in Europe compared to that for other years.
Click image to enlarge.

As a continent, Europe is set to break its record by 0.3°F, according to new estimates made by Geert Jan van Oldenborgh at KNMI, and explained in the Climate Indicator Bulletin released by the World Meteorological Organization’s Regional Climate Center for Europe and the Middle East.

Van Oldenborgh used both modern and early temperature records, as well as sources like tree rings, which can act as a proxy for very old temperatures, to observe Europe’s temperature records back to 1500 and determined that 2014 will almost certainly be the warmest year Europe has experienced during the past 500 years.

Using those observational records, van Oldenborgh’s analysis concluded that global warming has made a temperature anomaly like the one observed in 2014 in Europe at least 80 times more likely.

At the beginning of the 20th century, before the global warming signal emerged from the noise of year-to-year variability, the chances of seeing a year as warm as this one were less than one in 10,000, van Oldenborgh said. “It would be almost impossible to reach these temperatures a century ago.”

Independently, the two other groups used different analyses to probe global warming’s role in the year’s record heat. A team at the University of Oxford in the UK, led by Myles Allen and Friederike Otto, used thousands of iterations of regional climate models embedded within larger global models to examine more localized weather events.

For example, their data for Germany determined that what was once a 1 in 80-year heat event has now become a 1 in 7-year event, making it 10 times more likely due to global warming. 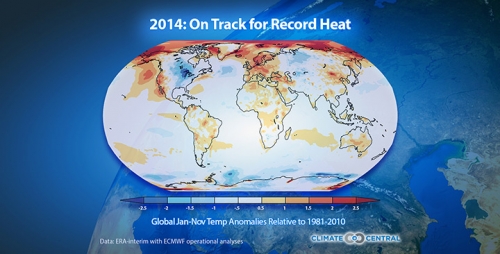 Temperature anomalies across the globe for the year from January-November, as compared to the 1981-2010 average. Click image to enlarge.

An Australian team led by Karoly and Andrew King of the University of Melbourne answered a slightly different question, which was to ask how much more likely it was to break the 2007 record with warming than without. To do this they used the same model simulations used in the Intergovernmental Panel on Climate Change’s most recent report.

They found that the accumulation of greenhouse gases, which increases the chances of a record warm year every year they accumulate, made such an event 35 times more likely.

The differences in the numbers calculated by each group are a product of the slightly different questions each team asked, as well as the inherent uncertainty in these sorts of measurements, given how rare extreme events are, van Oldenborgh said. But for this heat event, “these numbers are very close given the uncertainties,” he said. That agreement across studies “gives us confidence in the result that global warming made a temperature this high in Europe much more likely.”

The results are also in line with previous work of Karoly’s that found that the record warm year Australia experienced in 2013 was “virtually impossible” without the influence of global warming, as he put it.

“What we’ve been finding is that there’s a very clear signal on human influences on increases in the likelihoods of record temperatures,” Karoly said.

You May Also Like:
Greenland’s Ice Sheet Shifts Could Speed Melt
Electric Cars a Mixed Bag For Health, Climate
Climate Accord Struck In Lima; Key Decisions Postponed
November in Books; 2014 On Pace for Hottest Year