The health effects of air pollution have been underestimated and Europe should review its laws to tackle the problem, U.N. scientists have concluded after a major review of new evidence.

Sixty international scientists, commissioned by the World Health Organization, analyzed eight years of studies to see how minute specks of soot, gases such as ozone and nitrogen dioxide (NO2), and other pollutants from road and rail traffic, industry and indoor fires harm human health. 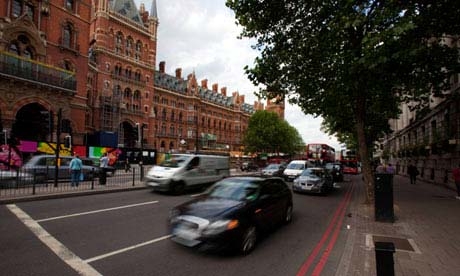 After a major review of new evidence, U.N. scientists have concluded the health effects of air pollution have been underestimated & Europe should review its laws to tackle the issue.
Credit: Graham Turner via The Guardian

In addition to premature deaths from respiratory and heart diseases, they found links to new conditions such as diabetes and still births and adverse effects on the cognitive development of children born to mothers exposed to even small levels of air pollution.

Studies on NO2, said the report, produced new evidence of long-term effects, “including harm to health at levels below existing EU limit values. The consequences for entire populations, including people with existing respiratory and heart problems, would be significant”, said the report.

The scientists, who included cardiologists, epidemiologists, toxicologists and other public health experts, said that wood fires in the home, and even commuting to work by train and tube could significantly increase exposures to particulate matter, NO2, CO and benzene. Underground rail systems, such as the tube in London, were found to be a major contributor to the exposure to ultrafine particles, black carbon and some metals. Indoor sources of pollution, such as wood fires, also significantly harmed people's health.

Anne Stauffer, deputy director at the Health and environment alliance (HEAL), said the results “are a wake-up call for decision-makers in Europe to take air pollution more seriously. The new findings provide evidence-based science that EU policies are inadequate. Twice as many people suffer from asthma today compared to 30 years ago”.

The study is particularly embarrassing for European governments, which have tried to water down or delay existing air pollution laws. Earlier this year, the supreme court declared that the UK government was failing in its legal duty to protect people from the harmful effects of air pollution.

“Air pollution causes 29,000 early deaths a year in the UK — more than obesity and alcohol combined. This shows the UK is not just on the wrong side of the law, but also on the wrong side of the science. All the evidence tells us we need much stricter legal standards, yet the UK is fighting tooth and nail in the courts to avoid them and lobbying the EU to weaken them,” said Alan Andrews of campaign group Client Earth.

“With the World Health Organization research now calling for stronger EU air pollution policies, our government must finally take its public health responsibilities seriously. They must take bold action to clean up the dirty air blighting many areas of the UK — at the very least making sure current EU legal limits are met by the dates required,” said Jenny Bates, Friends of the Earth air pollution campaigner.

Air pollution is now recognized by doctors as one of the world's 10 greatest killers. The Global burden of disease study, published in The Lancet last December, showed exposure to air pollution was associated with more than 430,000 premature deaths a year worldwide.

London, with 4,300 deaths a year, is one of the worst cities in Europe for some pollutants. The city has 2,500 schools and 180,000 children within 150 meters (492 feet) of roads carrying 10,000 or more vehicles a day. Massachusetts Institute of Technology research earlier this year found car exhaust fumes in Britain now caused more premature deaths than road accidents.