The kind of extreme coastal flooding events that today hit parts of Europe roughly once every hundred years could happen annually by the end of the century as the climate continues to change, a new study suggests.

Such “rare catastrophic events, which most of us have not experienced, will become a part of most Europeans’ lives,” study leader Michalis Vousdoukas, a coastal oceanographer at the Joint Research Centre (JRC) of the European Commission, said in an email.

The analysis, detailed in the journal Earth’s Future, is the first to take into account not only sea level rise due to warming temperatures, but also the impacts of climate change on storm surge and wave activity when estimating future flood risk. Those two factors have played a key role in the worst flooding disasters, and so are important to consider because “it's always the extreme events that are important in terms of impacts, since they are explosive and unpredictable,” Vousdoukas said.

That seas are rising as the planet heats up is one of the clearest outcomes of climate change. Currently, seas are rising by about an inch per decade, though rates vary from region to region because of local land rise and subsidence. If greenhouse gas emissions aren’t curbed, global seas could rise by 10 inches to 2.5 feet, on average, by the end of the century, according to the most recent Intergovernmental Panel on Climate Change report.

Higher seas lead to more, and more severe, coastal flooding during storms, but to date most evaluations of that future threat have focused only on the sea level rise component, leaving out potential changes to tides, storm surge and wave energy, which cause most of the erosion and damage to houses and infrastructure seen during such storms.

One of the biggest such examples in recent European history are the 1953 North Sea floods, when high tides combined with an intense storm system to flood large swaths of the Netherlands and the United Kingdom, killing more than 2,500 and causing billions of dollars in damage.

Rolling all the factors together that contribute to such extreme floods is difficult and necessarily involves making certain assumptions and simplifications. But the authors think it can provide a clearer picture of the kind of future the region is up against and the kinds of investments needed to be made in coastal defenses, as well as what could be avoided by reducing the greenhouse gas emissions that are driving global warming.

The authors used observations of these different factors as well as climate models to estimate how each factor might change along the coastlines of Europe under different greenhouse gas emissions scenarios.

They found that while sea level rise drives the bulk of the flooding risk, the changes to storm surge and waves amp up that risk in certain areas, particularly the North Sea and along northern European coasts more generally.

By the end of the century, the level of a 100-year flood event could reach 2.5 feet higher than today on average around Europe’s coastlines if emissions continue unabated and could still reach nearly 2 feet higher even under moderate emissions reductions. In the North Sea region, they could reach 3 feet higher.

“Identifying these ‘hotspots’ is critical for local managers and should motivate more detailed regional/local analyses in order to make informed decisions on future adaptation needs,” Thomas Wahl, who studies coastal flood risks at the University of Central Florida, said in an email. Wahl was not involved with the new study. 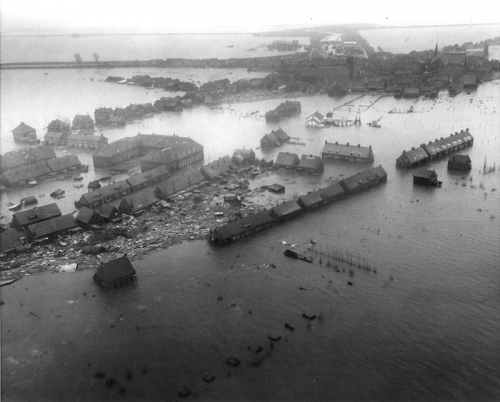 The study also finds that a 1-in-100 year flooding event today could happen once a decade by mid-century and every few years to annually by the end of the century, depending on emissions levels.

Despite the inherent limitations of the analysis “it is an important step in the right direction and to date, the most comprehensive analysis of changes in coastal extreme sea levels under climate change for Europe,” Wahl said.

Vousdoukas and his colleagues are working on similar, global-scale analysis, which suggests such extreme flood hotspots will be found elsewhere. Large variations in such risks along the U.S. coast have already been hinted at in other studies, Wahl said.

In response to the catastrophic 1953 floods, the Dutch government constructed a massive flood protection system of dams, dykes, locks and levees to prevent history repeating itself. Vousdoukas and his colleagues hope that European, and other, governments will be able to use his work to start preparing for future risks before the flood of the future arrive.

“One of the important messages from our work is to highlight the potential future challenges for the European coastline,” he said. “Designing and implementing sufficient and socially fair adaptation/mitigation measures is a challenge and our societies should start preparing now.”

You May Also Like:
Carbon Dioxide Is Rising at Record Rates
Mass Bleaching Is Hitting the Great Barrier Reef Again
Climate-Friendly Energy Star Program Could be Cut
February’s Warmth, Brought to You by Climate Change