EPA Moves to Slash Methane at Landfills and Oil Wells

The federal government is proposing several small steps to reduce climate change-driving methane emissions in the U.S. — one related to landfills and the other to oil and gas wells on Native American reservations.

As part of the Obama administration’s Climate Action Plan, the U.S. Environmental Protection Agency announced Tuesday that it is proposing to improve its air pollution standards for newly-built municipal landfills, requiring them to capture landfill gas, which contains methane and carbon dioxide. 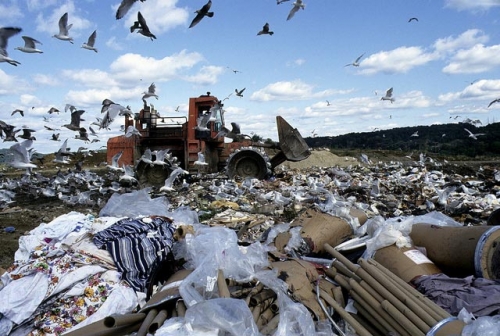 The EPA estimates that methane accounts for about 9 percent of greenhouse gas emissions in the U.S. Landfills are the third-largest source of methane emitted by humans in the U.S. behind oil and gas production, and livestock. Over a 100-year timeframe, methane is about 34 times as potent at trapping heat than carbon dioxide, and over 20 years, it's 86 times more potent.

The new rule would cap municipal landfill emissions at a lower level than currently required. New landfills would be required to capture two-thirds of their methane and toxic air emissions by 2023, or about 13 percent more emissions than required under current regulations.

The EPA also announced that it is considering an update of emissions guidelines for existing landfills nationwide as a way to reduce methane emissions. Those guidelines, if implemented, would affect more than 1,000 landfills across the country.

In a statement, EPA administrator Gina McCarthy said reducing methane is a powerful way to act on climate change, building on the the Obama administration’s progress in addressing climate change.

With a rule addressing not-yet-built facilities followed by a rule for existing ones, the EPA’s tack in writing new landfill emissions regulations follows a pattern similar to the Obama administration’s proposed regulations for new and existing power plants.

The EPA is also planning to write a regulation that it says may reduce methane emissions from oil and gas operations on Native American reservations by regulating volatile organic compounds, or VOCs, and other non-greenhouse gases from oil and gas wells.

That proposal would allow a Clean Air Act air pollution permitting program for Native American reservations to apply to oil and gas development on tribal lands. The new regulation would not apply directly to methane emissions from oil and gas wells or regulate greenhouse gas emissions, however. It would reduce methane as a side effect of regulating other forms of pollution from those wells. 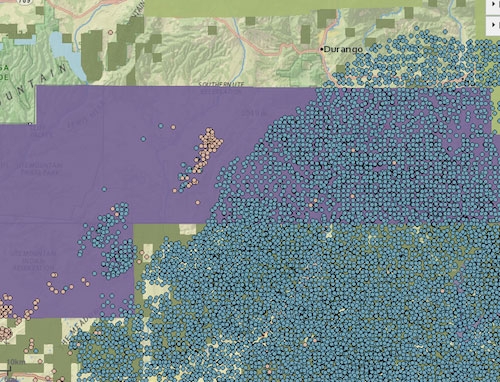 This map shows the hundreds of oil and gas wells that exist on the Southern Ute Indian Reservation in southwestern Colorado, and on other public lands straddling the Colorado-New Mexico state line near Durango, Colo. Native American lands are shaded in purple.
Credit: U.S. Energy Information Administration

Numerous studies have been released in the past several years suggesting that methane leaks are common at oil and gas drilling and production sites, but scientists do not know how much commonly leaks and at what rate.

The EPA declined to respond to Climate Central’s numerous inquiries about whether the agency has any estimate for how much leaking methane can be reduced by regulating VOCs and other pollutants.

EPA spokeswoman Liz Purchia instead said that regulating VOCs will cut methane as a side-benefit, but methane emissions are not being directly regulated under the proposed rule.

A 2011 Western Regional Air Partnership analysis of oil and gas air emissions control requirements set by both states and the EPA said that gas-powered pneumatic controllers on oil and gas production equipment release VOCs and methane with every valve movement, and some release gas continuously.

The analysis says methane emissions from oil and gas wells would be reduced “significantly” by regulating VOC emissions.

“There’s quite a bit of uncertainty and disagreement about what the actual leak rate is,” said Tom Moore, Western Regional Air Partnership Air Quality Program Manager for the Western States Air Resources Council in Fort Collins, Colo. “That makes it difficult to understand how much any particular regulation would reduce methane leakage.”

Oil and gas production systems are designed to leak methane because tanks and other equipment could otherwise explode because of gas buildup inside. Many wells have systems designed to capture those emissions or flare them, but oil and gas equipment and their leak rates vary from region to region, he said.

The EPA is taking public comments on the oil and gas emissions regulation through July 21, and on the landfill emissions proposals through Aug. 18.