The entire population of Antarctica's famous emperor penguins could fall by a third by the end of the century because of disappearing sea ice, putting them at risk of extinction, researchers said on Sunday. 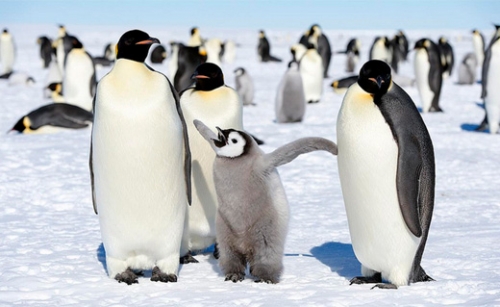 All of Antarctica's emperor penguins could fall by a third by the end of the century because of disappearing sea ice, putting them at risk of extinction, scientists warn.
Credit: Christopher Michel/Flickr

The finding justified protecting emperor penguins under the endangered species act – as America already does for polar bear – the researchers writing in the journal Nature Climate Change said.

They also called for marine reserves to buffer the fish stocks penguin need to survive.

“The population is declining. Unless something changes to stop that, the population will go into extinction,” said Hal Caswell, senior scientist at Woods Hole Oceanographic Institute, and one of the authors.

As a top predator in Antarctica, the main threat to emperor penguins’ survival comes from climate change which is melting the sea ice.

The loss of sea ice is reducing the supply of krill, the tiny shrimp-like crustaceans that populate the Southern Ocean, and are the emperor penguins’ main food source. Young krill feed off of algae living in the sea ice. When the ice goes, so do the krill.

Changes in the ice around Antarctica may - in the short term - boost some of the emperor penguin populations, especially along the Ross Sea, the researchers said. Sea ice off the western coast of Antarctica has been on the increase, because of break-up of glaciers and winds.

But by 2100, all 45 known emperor penguin colonies of Antarctica will be on the decline because of loss of sea ice. Those located on the coasts of the eastern Weddell Sea and the western Indian Ocean will show the sharpest drops. Nine colonies are projected to be “quasi-extinct,” the researchers said.

Other studies have raised the threat to emperor penguins under climate change, suggesting the ordinarily hardy 3-foot animals are susceptible to rising heat. Smaller penguins like the Chinstrap and Adelie are also at risk from warming. 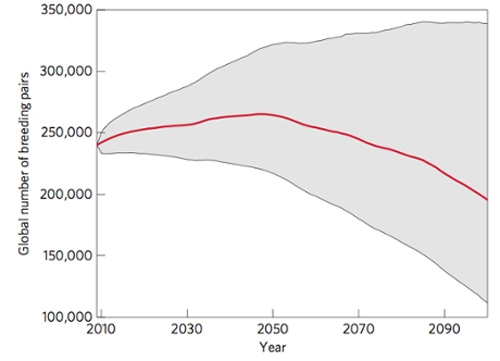 Global number of breeding pairs of emperor penguins from 2009 to 2100. The red line is the median and the grey area is the 90 percent envelope from stochastic simulations of population trajectories.
Credit: Nature Climate Change via The Guardian

Researchers from the University of Minnesota last week suggested some emperor penguins may be better equipped to adapt to changing ice conditions than previously thought, by moving their colonies.

But the Woods Hole researchers said their study was the first to forecast a population decline across all of Antarctica. Their study also suggested there was little scope for penguins to adapt to the changing ice conditions.

The researchers said the findings called for urgent measures to help the penguins survive – such as legal protections under America’s endangered species act and the creation of marine reserves off Antarctica.

“Implementing a marine protected area in the Ross Sea could help buy time to avoid extinction and to put in place needed conservation and greenhouse gas mitigation strategies,” Stephanie Jenouvrier, lead author and a scientist at Woods Hole, said in a statement.

A marine reserve would potentially put large areas of ocean off-limits to fishing – reducing the pressure on krill stocks and giving the penguin a better chance at survival, said Andrea Kavanagh, director of global penguin conservation for the Pew Charitable Trusts.

“Given this new research, and what we already know about global temperatures warming and the changing climate, one of the things we should do immediately is put a marine reserve in place so we can make sure that we are not fishing in areas where the penguins need to forage for food,” she said. “It is one way of eliminating one more threat to the penguins.”

The study used observations from the colony at Terre Adelie in East Antarctica that has been extensively studied, and satellite data from other known colonies.