Electricity produced from reflected sunlight using large arrays of mirrors constructed in the desert Southwest is expected to more than double this year, thanks to several large solar thermal power plants that are scheduled to begin operating soon in Arizona and California, the U.S. Energy Information Administration announced in a report Thursday.

The two biggest solar thermal power plants that will be operating by the end of the year could power more than 200,000 homes in the Southwest. 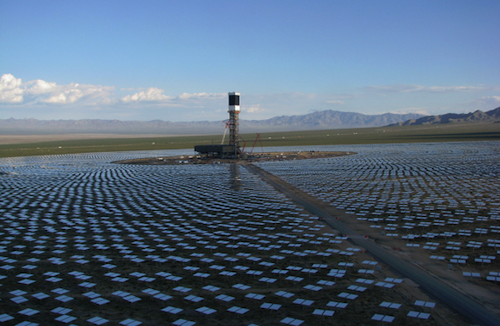 Solar thermal power plants use arrays of mirrors to focus sunlight on water or another fluid, heating the liquid and turning a turbine, generating electricity. They do not use photovoltaic cells common with rooftop solar generating installations and other larger solar power plants.

The EIA projects that the solar thermal generating stations expected to come online this year, each funded by U.S. Department of Energy loans, will generate about 641 megawatts of electricity, which will add to the current 476 megawatts of solar-thermal capacity in the U.S. prior to the new plants starting operations. Later this year and in 2014, a total of six new solar thermal projects are expected to begin operating, generating a total of 1,257 megawatts of new power generating capacity. Those projects will represent 4 percent of all new additions to U.S. electric generating capacity for 2013 and 2014, according to EIA data.

“They’re a new breed,” said EIA solar power analyst Gwen Bredehoeft. “There’s going to be a lot of interest in watching how they perform.”

Until the technology and economics of solar thermal are proven, little growth in capacity is expected after 2016, she said.

Solar thermal power plants are expensive — costing up to $2.2 billion each — and some developers have canceled their solar-thermal projects in favor of photovoltaic power generators, which are seen to be less expensive to build and operate since photovoltaic costs have dropped in recent years, she said.

Solana, which began operating in October, collects sunlight using “parabolic mirrored troughs,” which track the movement of the sun and focus the reflected sunlight onto a tube filled with heat transfer fluid-filled that runs through the center of the trough, according to the EIA. The plant also includes thermal storage, which the EIA says will allow the plant to generate electricity for six hours using only stored energy. The plant is expected to generate enough electricity to provide power to 70,000 homes.

The Ivanpah plant, located on public Bureau of Land Management land 50 miles northwest of Needles, Calif., uses a giant array of mirrors positioned in a large circle around three “power towers.” The mirrors focus sunlight on a boiler at the top of a 459-foot tower in the center of the circle, generating steam and turning an electric turbine, the EIA report says. The plant is expected to generate enough electricity to power 140,000 homes in California.

Federal loan guarantees totaled $1.45 billion for the Solana project and $1.6 billion for Ivanpah, according to the EIA.