Get Ready for Next Climate Phenomenon: El Nino

For West Coasters sick of the ridiculously resilient ridge of high pressure and East Coasters tired of hearing about the polar vortex, get ready for a new climate phenomenon to dominate headlines. El Niño could be making a return this fall after a 4-year hiatus, changing rainfall and temperature patterns across the world. It could even boost the odds of 2014 being the globe’s hottest year on record.

The National Oceanic and Atmospheric Administration issued an El Niño Watch on Thursday, indicating conditions are favorable for the climate phenomenon to develop in the next 6 months. “Neutral” conditions are likely through the summer, but by fall NOAA's joint forecast with the International Research Institute for Climate and Society puts the odds of an El Niño developing at more than 50 percent. It’s been nearly 48 months since the last El Niño formed. 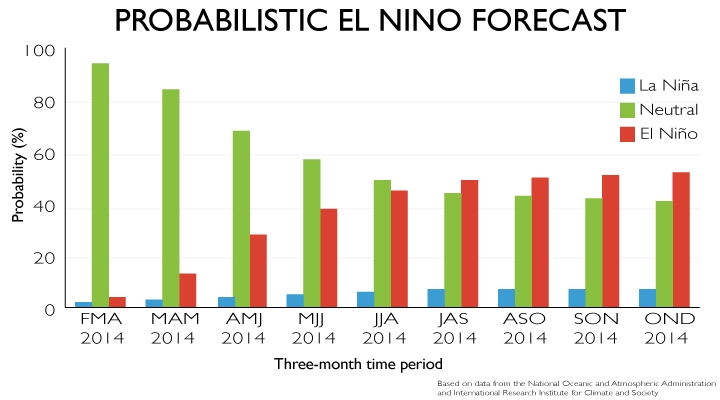 A graph showing the probabilities of El Niño, La Niña, and neutral conditions through December. Data via the National Oceanic and Atmospheric Administration and International Research Institute for Climate and Society's March forecast.

El Niño refers to a warming of tropical Pacific Ocean waters off the coast of Peru. A shift in trade winds kickstarts the process, which occurs every 2-7 years, and the formation of El Niño can alter weather patterns around the globe. Some of those shifts could be beneficial, especially in the U.S.

An El Niño increases the likelihood of wet conditions in California and the Southwest, which could provide relief to areas suffering through severe drought. Warm conditions are also more likely in the Northeast. That’s welcome news for a region where teeth have been chattering all winter. The Eastern Seaboard could also see the major hurricane drought stretch for another year as El Niño tends to inhibit the formation of Atlantic Hurricanes. The last official major hurricane to make landfall in the U.S. was Hurricane Wilma in 2005.

Not all parts of the globe would welcome El Niño, though. An El Niño would increase the odds of dry weather in northeast Brazil. That region is suffering through its worst drought in 50 years. Peru’s anchovy industry also faces negative impacts as warmer waters off the coast kill off the food supply the fish rely on.

Global temperatures are also usually hotter in El Niño years. Four of five warmest years on record occurred during El Niños and all have come since 1998. That includes 2010, the globe’s hottest year on record. Layering El Niño on top of the increase in global temperatures due to climate change has some saying that 2014 could break the record.

The forecast comes with a caveat, though. El Niño forecasts in the spring generally come with greater uncertainty. Researchers refer to this as the “spring predictability barrier.” As Capital Weather Gang notes, the last El Niño watch issued in 2012 turned out to be a bust. That year saw El Niño conditions develop in the first half of fall but sputter by the end of October and dissipate completely by the end of the year.

The impact of climate change on El Niño is still an area of active research. There have been reports that the likelihood of monster El Niños will double in the next century as the climate system warms. Analysis of Pacific Ocean corals has shown that El Niños have also gotten stronger over the course of the 20th century, but they haven’t necessarily become more regular.