NEW ORLEANS — Last year brought a huge advance in tornado forecasting: the first seasonal severe weather forecast for the U.S. The forecast proved to be accurate and now researchers are back with a second forecast: a below average number of tornadoes and hailstorms for the coming year.

The new forecast was presented at the American Meteorological Society’s annual meeting in New Orleans on Monday. Whether the tornado forecasting continues to be accurate or faces a sophomore slump will play out in the coming months as severe weather season ramps up in the Plains. The U.S. sees about 1,000 tornadoes a year on average with many occurring during the spring from Texas to Nebraska, an area dubbed Tornado Alley.

Specifically, the forecast is calling for a 54 percent chance of a below-normal number of tornadoes and 71 percent chance of fewer-than-normal hailstorms in the south central U.S. this spring, thanks largely to the continuing influence of El Niño. In an average year, the odds are normally split 33/33/33 between above-, below- and near-normal chances.

Though the warm waters in the tropical Pacific associated with El Niño have likely passed their peak heat, their influence on the atmosphere and weather around the world will continue into the spring.

For the Tornado Alley in the winter and spring, El Niño generally tweaks the jet stream so that the types of storms that can spawn tornadoes steer further south. La Niña, the opposite phase of El Niño when the waters in the tropical Pacific cool, has the opposite impact. That knowledge is a major boon to this spring’s forecast.

“For the upcoming season, we’ve now got a strong El Niño so this is when we hope our forecast will work the best where it’s driving the large majority of the signal,” John Allen, a postdoctoral researcher at the International Research Institute for Climate and Society, said.

Allen is part of the team that created the seasonal outlook. The effort began nearly five years ago after a series of major tornado outbreaks decimated parts of Oklahoma and the surrounding states.

The probability of severe weather forming on a given day in the U.S.

Last year, researchers forecast 60 percent odds of an average spring tornado season in the Plains, an outlook that was borne out. After March passed quietly, severe storms spawned 127 tornadoes from Nebraska to Texas in mid-May. By the end of spring, there had been 7 percent more tornadoes than normal, making the forecast pretty spot-on.

The way the season played out underscored one of the challenges in forecasting an entire season. Tornadoes tend to occur in clumps as opposed to individual storms like hurricanes. A single severe weather outbreak can spawn dozens of tornadoes, turning a quiet season into a busy one in just a few days and increasing the likelihood of major damage.

Allen said there’s also a danger in reading too much into what a below-average year means.

“It only takes one tornado to ruin your house and one major tornado to take your life,” he said. 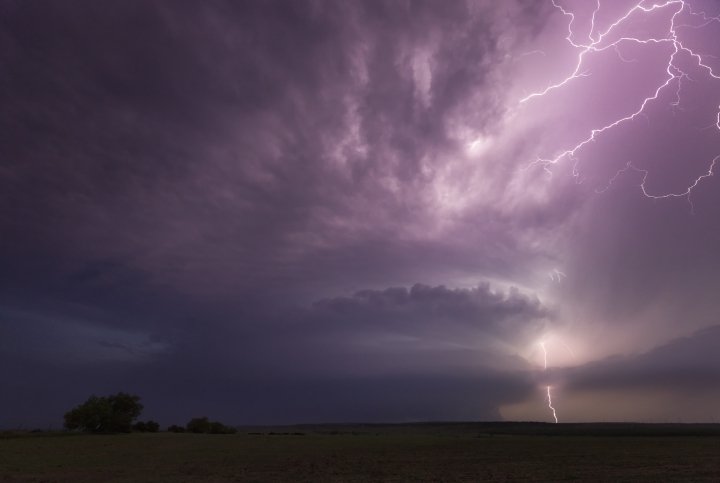 A supercell near Throckmorton, Texas on May 6, 2015 that was part of a series of severe storms that swept across Tornado Alley.
Credit: Kelly DeLay/flickr

And just because Tornado Alley is quiet in the spring doesn’t mean other parts of the country will be as lucky. Florida and southern Texas see increased odds of tornadoes in El Niño years, particularly in late winter and early spring. Allen said all of Florida’s major tornado outbreaks have occurred during El Niño years.

California — a state known more for surf’s up than tornadoes spinning up — also tends to see more tornadoes in El Niño years. The state actually sees a handful of tornadoes even in an average year.

Ultimately, while the seasonal forecast doesn’t show where outbreaks will take place, it can provide an advance warning for emergency managers on how to prepare their state or region for severe weather. That’s particularly true during a La Niña year, which tends to up the odds of more severe tornado season.

“If we’ve got a La Niña season coming up (next year), the Southeast needs to be prepared,” Allen said.