In the last few years, the fringe of sea ice that surrounds Antarctica has continually reached record high levels, in stark opposition to the long-term decline of sea ice in the Arctic. But this year, the end-of-winter peak in Antarctica has been decidedly lower and scientists say a strong El Niño is the likely reason for the abrupt shift.

Just why Antarctica has seen such record sea ice formation in recent years is still something scientists are working out, though it could paradoxically be related to the effects of global warming on the southernmost continent, through increased meltwater from shrinking glaciers to changes in winds. And researchers have been clear that any gains in Antarctic sea ice are dwarfed by the losses in the Arctic, which could have profound implications for the local ecology and economy, as well as potential influences on ocean and atmospheric patterns.

Antarctic sea ice levels are naturally more erratic than those in the Arctic, as well, which makes such year-to-year changes less surprising.

Because the Arctic and Antarctica are at opposite ends of the globe and in opposite seasons, sea ice around the latter reaches its peak around the time the cap over the former hits its yearly low. The extent of Arctic sea ice at the end of summer this year was the fourth lowest area on record — the 10 lowest extents have all occurred since 2005.

Earlier in the summer, Antarctic sea ice looked like it was set to follow the pattern of recent years and was on track for another record. But in mid-July, the growth of new ice began to level off, and the ultimate end-of-winter maximum was only the 16th highest in the 35-year record, though still slightly above the 1981-2010 average maximum. Sea ice area reached its peak of 7.24 million square miles on Oct. 6, while the average is 7.19 million square miles.

The burgeoning of this year’s El Niño into an event set to rival the strongest on record is the likely reason for the mid-season change in sea ice behavior, Scambos said. Though El Niño is an event centered on the tropical Pacific, the shift in the location of warm ocean waters it features triggers changes to the circulation of the atmosphere that can have repercussions thousands of miles away.

“Its got an impact all over the world,” Scambos said, including Antarctica. 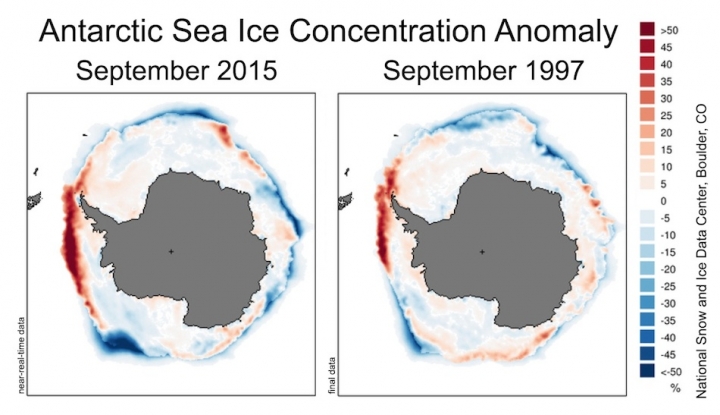 Antarctic sea ice concentrations for September during the two strong El Niño events of 2015 (left) and 1997 (right) as compared to the 1981-2010 averages. Colors show the percent difference in concentration in different areas, with oranges and reds indicating higher concentrations and greens and blues lower.
Click image to enlarge. Credit: National Snow and Ice Data Center

Just south of the main center of El Niño action is a region where a low-pressure feature called the Amundsen Low takes shape. This low has a major influence on Antarctic weather.

“Its position and strength has a big, big impact” on key sea ice formation areas, as well as parts of Antarctica that have seen some of the more profound impacts of warming, Scambos said. “It’s kind of one big complex knob that you can turn up or down and shift left or right.”

El Niño tends to weaken the Amundsen Low, affecting winds and temperatures in the region, which in turn can influence sea ice formation. Winds changed in a way that tended to dampen that formation, while temperatures were higher, also limiting sea ice growth.

The patterns of where there was more or less sea ice around Antarctica this September looked very similar to that of September 1997, the last time there was an El Niño of commensurate strength, Scambos said.

Now the ice around Antarctica begins its decline as the melt season gets underway, while Arctic sea ice expands as fall brings colder temperatures and shorter days.

You May Also Like:
American Icons Threatened by Sea Level Rise: In Pictures
Energy Industries Invest in Contest to Recycle Emissions
El Niño Lifts Odds of Wetter South, Drier North This Winter
2015 Closes in on Becoming the Warmest Year Yet