El Niño Could Bring Drought and Famine in West Africa

By Karl Mathiesen, The Guardian

A global weather phenomenon could cause a famine in the Sahel this year by combining with already dry conditions to create a “double whammy” for the region, scientists and aid groups have warned.

Professor Adam Scaife, a long term forecaster at the UK Met Office Hadley Centre, said models now agreed an El Niño event was likely and the first impacts may be felt as early as June. 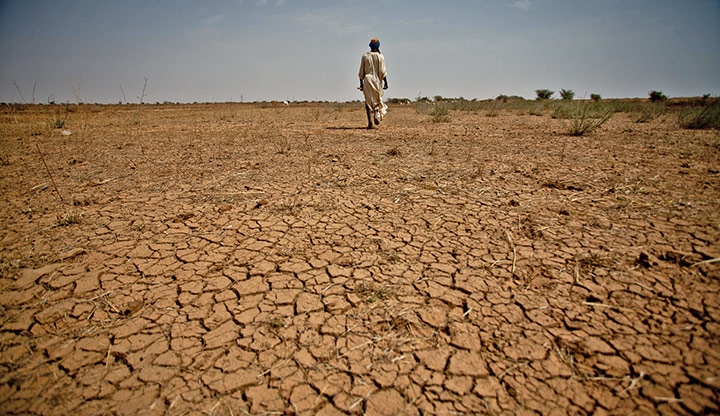 El Niño is caused by a reversal of trade winds in the Pacific that allow warm water to spread east, across the ocean. The two to seven year cycle plays havoc with weather across the world.

“[A] place that’s really important to stress is west Africa, where there is increased risk of drought during El Niño. That is exacerbated this year by some conditions [including] cooling of the North Atlantic,” he said.

In west Africa, Scaife said conditions were aligning in a similar way to the massive 1972 drought that devastated the Sahel with famine. During this event, drying from El Niño tipped the region into full blown drought.

Scaife said the current parched conditions combined with further warming and drying from El Niño would be a “double whammy”.

Oxfam’s west Africa regional director Aboubacry Tall said the partial failure of the 2014 rainy season had left between 300,000 and 400,000 people in the Sahel without access to a secure food supply.

Speaking to the Guardian from Sierra Leone, Tall said the first rains of 2015 began to fall just a few days ago and Met Office predictions of a drought as early as June were deeply concerning for people awaiting crop-growing rain in the sub-Saharan areas of northern Nigeria, Niger, Chad, Mali, northern Senegal, and Mauritania.

“If this rainy season is disrupted then the consequences would be quite drastic because even this year we have some gaps. If you have a second generalized failure of crops across the region you will certainly have the early set in of a food crisis or possibly a famine in the Sahel,” he said. 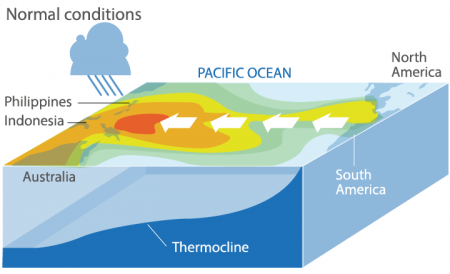 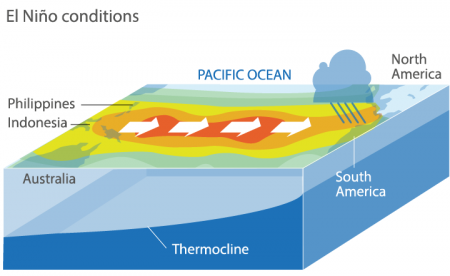 On Wednesday, U.S. president Barack Obama linked the violence and terror being wrought in Nigeria by Boko Haram to severe drought in the Sahel. It has been reported that young men have joined the al-Qaeda affiliated group after being displaced by food shortages.

In the neighboring coastal countries mounting a fragile recovery from ebola, Scaife said the effect of a possible El Niño was less clear. These areas are traditionally wetter and are more resistant to fluctuations in rainfall. “If anything it is more likely wetter on the Guinea coastline,” he said.

This news will come as a relief in countries where people have been driven from their farms and food production has dropped significantly.

“If El Niño was to [cause drought] on top of Ebola in affected countries it would certainly be a significant catastrophe in Liberia, Sierra Leone, and Guinea. It would put back any hope of recovery by at least another year,” said Tall.

Apart from Africa, El Niño could also bring dry conditions in Australia and India during the next few months. In California, wet conditions could put an end to the state’s worst drought in 1,200 years. 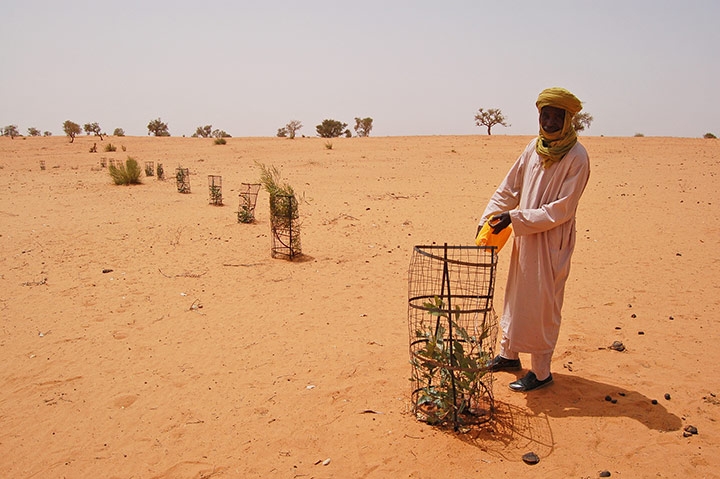 In 2014 many forecasters predicted an El Niño but it never materialized. Scaife said the Met Office modelling did not give the false alarm that led other agencies to make the wrong call.

“There was not unanimous agreement that the risk was increased. This year is different. All of the forecast systems that I’ve looked at show a clear increase in risk of at least a moderate El Niño event,” he said. Earlier this month the Australian Bureau of Meteorology and U.S. National Oceanic and Atmospheric Administration declared an El Niño.

In the past week a strong pulse of eastward winds has emerged in the west Pacific. “If anything that’s going to strengthen it even further,” said Scaife.

Professor Eric Guilyardi, from Reading University’s National Centre for Atmospheric Science said the current levels of warming in the Pacific were higher than before the largest recorded El Niño in 1997-98, although this does not guarantee an extreme event.

“[An extreme event] is not the most likely outcome but the risk is increased,” he said.

El Niños are known to temporarily raise the global temperature. Last year was the hottest on record. The global surface temperature was 0.57°C (1°F) above average, despite the aborted El Niño. Scaife said the first months of 2015 were already running an extremely high temperature, with temperatures currently at 0.64°C (1.15°F) above average.