It’s looking to be an El Niño-dominated winter across much of the U.S., as the truly impressive event this year makes forecasters more confident that the climate phenomenon’s impacts will show up this coming season. 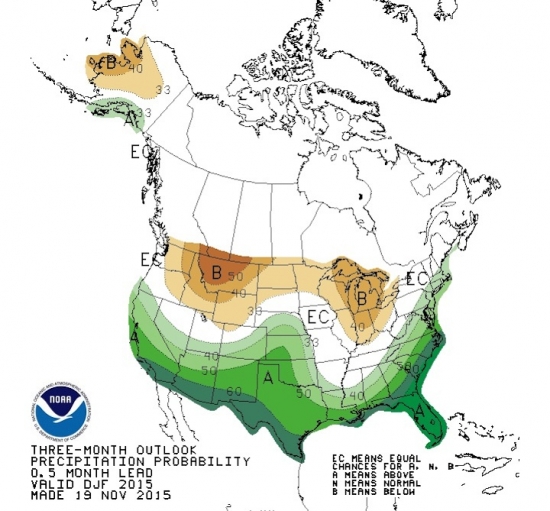 Where precipitation this winter is likely to be above (green) and below (brown) normal in the U.S.
Click image to enlarge. Credit: NOAA

In its monthly update of the seasonal outlook, National Oceanic and Atmospheric Administration forecasters on Thursday held steady with their expectations that El Niño would bring warm and dry conditions across a much of the northern tier of the nation, from the Pacific Northwest to the Great Lakes. Above-average precipitation is expected along a broad swath of the country, from California through the Southern Plains, over to the Southeast and up the East Coast.

That confidence in the general trends for the upcoming cold season is due to how strong this El Niño has become. It recently reached record levels by one measure, and is helping to drive 2015 to be the hottest year on record.

Though El Niño is defined by the warmer-than-normal ocean waters in the eastern tropical Pacific, it is a phenomenon with a global reach. The shift in heat in the tropical Pacific ocean affects the rhythms of the atmosphere above, which can have a domino effect downstream, with impacts reaching thousands of miles away. Over North America, El Niño tends to strengthen the subtropical jet stream during the winter months, which tilts the odds for shifts in temperature and precipitation across much of the country.

A strong jet stream has already turned up across the southern tier of the country, bringing bouts of rain to many southern states during October and November. While that “certainly bodes well in terms of our forecast,” Jon Gottschalck, chief of NOAA's Climate Prediction Center-Operational Prediction Branch, said, whether or not that is already El Niño pushing the atmosphere around is less certain, given that the strongest connections don’t typically begin until December.

“I think that’s an open question at the current time,” Gottschalck said. 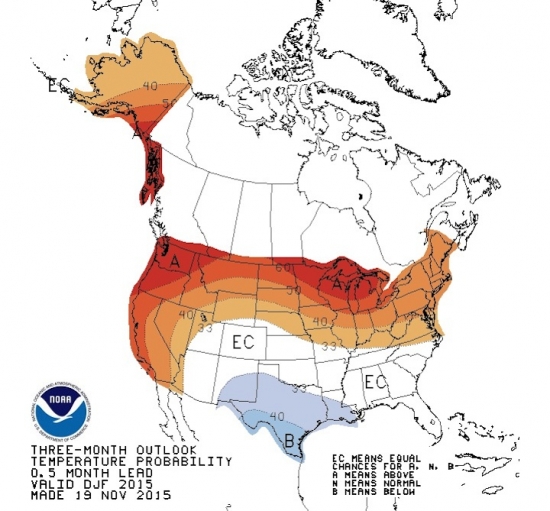 Where temperatures this winter are likely to be above (red and orange) and below (blue) normal in the U.S. Click image to enlarge. Credit: NOAA

The part of the country that is perhaps most closely watching the forecast is California, which desperately needs increased precipitation to begin the long climb out of four years of intense drought.

One potential snag, though, is that while the whole state is expected to see elevated chances of above-normal precipitation this winter, it is also expected to see warmer winter temperatures. That combination could mean that when the state does see storms, most of the precipitation will come as rain, and not snow. That’s a problem because snow is the state’s natural water storage, keeping it locked up until it melts in the warmer months, topping up reservoirs.

Rain is more likely to run off, especially if it comes in heavy bursts that can cause mudslides and flooding, a major concern the state is already preparing for.

Forecasters stress that while El Niño is the 500-pound gorilla affecting this winter’s weather, other factors can periodically come into play in the complex and chaotic interplay of the atmosphere. So it’s still possible, for example, that the north will have the odd Arctic chill or snowstorm — it is winter, after all.

You May Also Like:
Is Your State Prepared for Climate Change?
The Forgotten U.N. Climate Goal: 1.5°C
U.S. Agencies Agree: October Was Crazy Warm