By Johnny Langenheim, The Guardian

A growing number of scientists are predicting a major El Niño weather event this year, which could wreak havoc across South America and Asia as droughts, floods and other extreme weather events hit industry and farming. But the impacts on the world’s coral reefs could be even more disastrous. 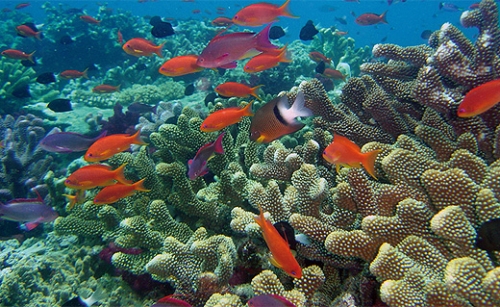 The last big El Niño in 1997/98 caused the worst coral bleaching in recorded history. In total, 16 percent of the world’s coral was lost and some countries like the Maldives lost up to 90 percent of their reef coverage.

The Australian Bureau of Meteorology suggests there’s a 70 percent chance of an El Niño occurring this year – and all the signs are that it will rival the ’98 event.

El Niño arises out of a confluence of factors that are still not fully understood, but its outcome is clear – parts of the ocean get hotter. A band of warm water develops in the western Pacific, while the Indo-Pacific Warm Pool – a blob of heat that spans much of Indonesia – starts oscillating wildly. This could spell disaster for the Coral Triangle, a southeast Asian bioregion that’s the underwater equivalent of the Amazon, home to more marine species than anywhere else on Earth.

“In 1998, the Coral Triangle started to bleach in May and continued till September,” says Professor Ove Hoeg Guldberg, a marine biologist and head of the Global Change Institute at the University of Queensland. “The Coral Triangle sees prolonged periods of temperature anomaly during an El Niño because the equator passes through the middle of it, so it experiences both northern and southern hemisphere summers.”

Professor Guldberg, who led the Oceans chapter of the IPCC report on climate change, is less than sanguine about the prospects for the region’s coral reefs. “It only takes about half a degree on top of background sea temperatures to cause bleaching,” he explains. “Atmospheric scientists are telling us we’re headed for temperatures that will trump those of 1998.”

Corals are animals that behave like plants. They’re able to do this by maintaining a symbiotic relationship with dinoflagellates, a type of microbe that lives inside the coral’s tissue where it photosynthesises, passing sugar to its host. But when temperatures rise, the dinoflagellates stop making sugar and produce harmful free radicals instead. The corals then spit them out, stop producing their carbonate shell and steadily fade to white.

Coral bleaching is actually quite a common occurrence and bleached reefs can make comebacks – many of the reefs affected by the 1998 El Niño have made at least partial recoveries. “The thing is, under mild conditions, corals can recover their symbiotes,” says Professor Guldberg. “But because background temperatures are warmer, the corals can’t recover as before.” Even when reefs do recover, old growth corals that may have taken centuries to mature are often replaced with faster growing species that quickly colonizes large areas, homogenizing the ecosystem.

The elephant in the room of course is global warming and this is where things get scary. According to Professor Guldberg, current rates of ocean warming and acidification are unmatched in most if not all of the last 65 million years. “This sends chills down back of any biologist worth their salt because life will have to struggle in circumstances that it’s just not evolved for.”

It’s not so much the fact that 10 or 20 percent of global reef coverage could be lost in the next year or so, but the reduced ability of these reefs to recover. This is death by a thousand cuts, an aggregation of impacts, from extreme weather events to invasive species to destructive fishing practices, with global warming reverberating across all of them. A landmark 2007 study by John Bruno and Elizabeth Selig showed that the Coral Triangle had lost nearly 50 percent of its reefs since the 1980s. Beset by constantly rising temperatures, they simply can’t bounce back.

The Coral Triangle is particularly vulnerable because it’s more prone to non-climate related pressures than other reefs. According to the World Resources Institute, more than 85 percent of reefs within the bioregion are threatened by local stressors (overfishing, destructive fishing and pollution), which is substantially higher than the global average of 60 percent. About 120 million people depend directly on these reefs for their livelihood. As the coral dies, more and more of them will be forced to migrate to live. “You’re looking at a situation where a once vibrant ecosystem that offered goods and services for humanity is heading towards extinction,” says Professor Guldberg.

The broad scientific consensus is that corals worldwide could be on the verge of extinction by as early as 2050. In the broader context of global warming, coral reefs are not necessarily the first ecosystems to go, but they are the most graphic. They can be seen as an early warning system – the proverbial canary in the coalmine, except when corals start to expire, it tends to presage species annihilation on a scale witnessed only five times previously in the planet’s history. That’s why the term “sixth extinction” is becoming part of the media lexicon.

The only meaningful solution in the long term is to drastically reduce carbon emissions worldwide. Not much can be done to mitigate the impact of an impending El Niño, but some of the other non-climate related stresses can be removed. This means establishing areas of undisturbed marine habitat – lots of them – and reducing pressure on fisheries. Guldberg offers the metaphor of a chronically ill patient that needs radical treatment – “but they also need remedial care – blankets, water, food. That’s something immediate we can achieve.” As for the radical treatment, it needs to happen very soon. If not, corals could soon become mere aquarium artifacts.