The weak El Niño that has been in place since February seems to be gaining steam, with U.S. forecasters betting it will hang around through the end of the year, increasing the odds that the event could help make 2015 the warmest year on the books.

“If El Niño continues to evolve and possibly strengthen throughout the year as the Climate Prediction Center is projecting, it seems more and more likely that 2015 will end as the warmest year on record, and maybe by a rather large margin,” Jessica Blunden, a climate scientist with ERT, Inc., at the NOAA’s National Center for Environmental Information, said in an email. If so, 2015 would surpass the record set just last year, when the global average temperature was 1.24°F above the 20th century average of 57°F.

It certainly hasn’t been a straightforward route to get to the point where this El Niño started to take on more classic characteristics. The first signs of an impending El Niño came late in the winter of 2014, but then the event seemed to become stymied by late summer. It was finally declared by the CPC in February and has been gaining momentum ever since.

An El Niño is at heart a Pacific Ocean event, marked most notably by warmer-than-normal sea surface temperatures in the central and eastern tropical parts of that basin. But that’s not its only component: The warmer waters also cause changes in the atmospheric circulation over the tropics, shifting the prevailing winds and where storm activity occurs.

Those tropical atmosphere changes have a domino effect on the weather in other regions, even those thousands of miles away. El Niños, for example, tend to mean fewer hurricanes in the Atlantic Ocean basin because of increased wind shear that can rip storms apart. They also tend to bring drought conditions to parts of Australia, along with higher winter temperatures.

El Niños can actually mean rainier conditions across the southern tier of the U.S., but the most robust connections to an event don’t come until winter, meaning this event will have to stick around for quite awhile to see those effects.

For now, forecasters at the CPC and the International Research Institute for Climate and Society (IRI) at Columbia University think there’s a good chance that could happen. They put 90 percent odds that this El Niño will last through the summer and 80 percent that it will hang on to the end of 2015.

They reason they’re so confident is that there is a substantial pool of warm water below the tropical ocean surface that can keep surface waters elevated for several weeks. The atmospheric connections typical in an El Niño have also been growing stronger in recent weeks. 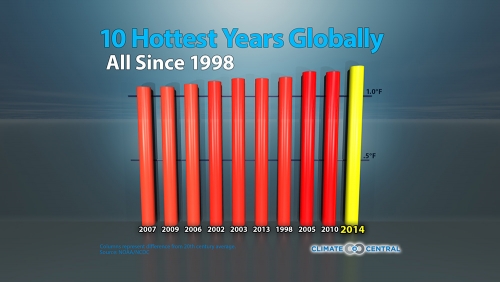 One effect El Niño can have regardless of the season is to boost global temperatures. Of the 10 warmest years on record, the only one not in the 21st century is the blockbuster El Niño year of 1998. The overall warming of the planet has meant that even in neutral or La Niña years, the global average temperature can set a record. (La Niña is the counterpart to El Niño and features colder-than-normal tropical Pacific waters.)

Technically, last year was a neutral year, but the considerable warmth that built up in many parts of the Pacific, as well as other ocean basins, helped to push 2014 to the top spot. Given the hints that the El Niño could be ramping up this year, the odds are great that 2015 could take over the title.

“The stronger the El Niño, the more likely this year will be [the] warmest on record,” IRI’s Tony Barnston said in an email. “And next year will be affected maybe even more, since there is a lagged effect and most El Niños persist a bit into the following year.”

Of course, spring is traditionally a time of year when saying anything about the strength of El Niño in later seasons is most difficult. Halpert, of the CPC, thinks it will be next month before anything more definitive can be said about how strong this El Niño might become.

“We’ll see what happens over the next month,” he said. “My guess is it’ll be obvious by the time we get to July.”

You May Also Like:
The ABCs of Antarctic Ice Shelf Melting
Is Warming Changing Boundaries of Hurricane Season?
The Bright Side of 13 Years of Clouds in 1 Map
‘Steel on the Water’ Critical for Offshore Wind in U.S.