Satellite views of the Pacific Ocean show an impressive trail of storms, strung like pearls on a necklace across the basin. While the western Pacific in particular is almost always a hotbed of tropical cyclone activity, this current flare-up is linked in part to a robust El Niño event that is showing signs it could continue to strengthen. 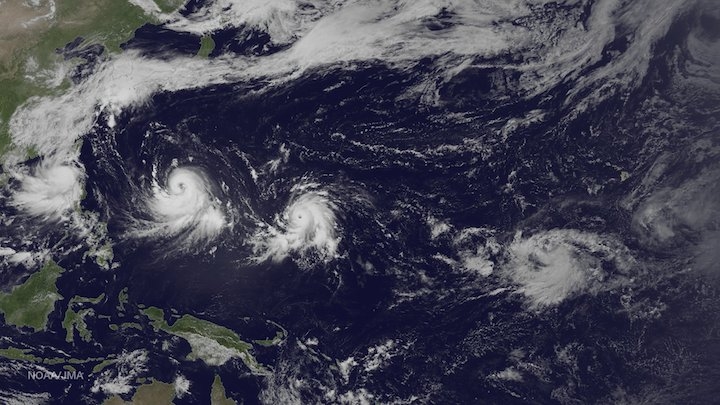 Four tropical cyclones (Linfa, Chan-hom, Nangka and Ela) strung out across the Pacific Ocean, with another potential storm system to the far right, as seen by a satellite on July 7, 2015.
Credit: NOAA

There are four tropical cyclones (the generic term for hurricanes and typhoons) in the Pacific, with a fifth on the verge of forming. The spectacle has tropical meteorologists marveling over the satellite images, as so many storms at one time, while not unprecedented, is somewhat unusual. The last time the Pacific had five storms at one time was in 2005; the record number of concurrent systems is six, which happened in 1974, according to hurricane expert Phil Klotzbach of Colorado State University.

Three of the storms are in the western Pacific basin, the earliest date that there has been three typhoons in that basin, beating the previous record of July 10, set in 1972. The other storm and the potential system are in the central Pacific; Tropical Storm Ela, as it has been named, also had a record-setting early birth: It is the earliest tropical storm to form in the central Pacific during the hurricane season.

This flurry of storm formation has been enabled by the larger environment in the Pacific, in particular from favorable conditions set in part by El Niño.

El Niño is a cyclical climate phenomenon rooted in the tropical Pacific that is most notably recognized by the warmer-than-normal waters it brings to the central and eastern parts of that region. Warm water is the fuel for tropical systems.

That warm water transfers heat to the atmosphere overhead, which shifts around the normal air circulation patterns. In particular, the normal easterly winds that blow across the tropical Pacific can slacken and even reverse. These shifts also mean that there is a broad area of rising air in the Pacific, which promotes convection, the process that drives tropical cyclones.

“Air is going up like crazy in the Pacific,” Klotzbach said.

(If air goes up in one area, it must go down in another, he added, in this case in the Atlantic basin, which has helped keep a tight lid on storm formation there, along with cold water temperatures and unfavorable winds.)

All of these ingredients — warm water, westerly winds, and rising air — have made for a very favorable tropical cyclone environment. Values of a measure of storm activity that meteorologists call Accumulated Cyclone Energy, or ACE, are at record levels for the North Pacific, Klotzbach said, around three times normal values. (This measure is a product of both the strength and size of all tropical cyclones in a basin through the season.)

Ela is the earliest TS on record to form in the CPAC in hurr season, fueled by record water temps & #ElNino #climate pic.twitter.com/wky0rtkPRz

The El Niño event is particularly giving a boost to central and eastern Pacific storms, as that is where the main pool of warmer-than-normal ocean waters is located. El Niño conditions usually mean more potential for storms to hit Hawaii. The island chain is normally somewhat protected by the area of cold waters around it, which cut off tropical systems from their fuel source. But the waters around the islands are much warmer than normal now, leaving them more vulnerable. (Ela looks to stay north of Hawaii.)

Another factor in the spate of recent storms is a climate phenomenon called the Madden Julian Oscillation, which features alternating areas of enhanced and suppressed rainfall that move from west to east across the globe. When the enhanced rainfall phase is over the Pacific, it can help to stir up storms, and this particular bout of the MJO has been exceedingly strong.

While the MJO phase will eventually peter out, the El Niño shows no signs of fading anytime soon. The latest joint forecast from the National Oceanic and Atmospheric Administration and Columbia University’s International Research Institute has slightly increased the odds that this El Niño will become a strong event and last through the end of the year, likely into next spring.

“I think at this point it’s no secret that we’re going to have a very, very strong El Niño,” Klotzbach said, echoing the excitement many atmospheric scientists have had watching the event unfold. However, forecasters can’t completely rule out the event fading away before winter, when it has its biggest impacts on the continental U.S.

What that means for tropical cyclones is that while the Atlantic is unlikely to produce much of a peep this year, the Pacific will likely see several more storms pop up.

Editor's note: This story has been updated to correct the date of the previous record for three typhoons.