In the coming weeks, this year’s super El Niño impacts should kick into high gear and last through the winter. However, one of the biggest impacts might not make headlines until well after the “Godzilla” El Niño returns to the depths of the ocean.

On Tuesday at the annual American Geophysical Union meeting, scientists indicated that this winter’s El Niño could cause a massive flare up of fires in the Amazon next fall. That raises major carbon emissions concerns.

Global fire emissions in 2010. The Amazon is in the red box.
Credit: NASA

El Niño, marked by a warm patch of water in the eastern tropical Pacific, influences a number of weather patterns around the world. That includes parts of the Amazon basin. El Niño decreases the likelihood of winter precipitation, which just so happens to be the region’s rainy season.

Coming into the dry season with a rainfall deficit makes the forest primed for fires. That increases the odds that small blazes people use for clearing land for farming can turn into much larger conflagrations that can release some of the Amazon’s massive store of carbon.

The Amazon stores an estimated 120 billion tons of carbon in its plants and soil and accounts for up to 25 percent of all carbon dioxide sucked out of the air every year. But in dry years, the Amazon turns into a carbon polluter, releasing more carbon than it takes up. 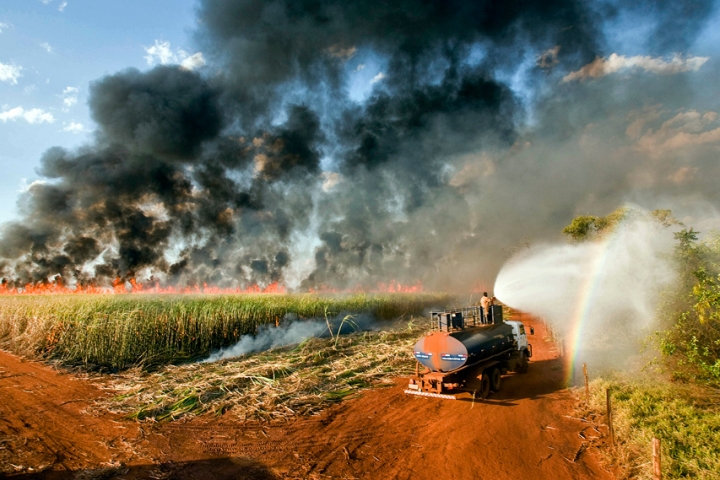 “El Niño is a major risk factor for the northern Amazon in the spring and southern Amazon late summer and fall,” James Randerson, a climate and fire expert at the University of California, Irvine, said.

Fires in those areas could be as severe as the ones that ravaged Indonesia this fall. Those fires were also influenced by El Niño. They released twice as much carbon as Germany does in an entire year and caused a public health crisis for Indonesia and the surrounding countries.

Randerson said the other main climate factor that could influence next year’s fire season is ocean temperatures in the North Atlantic, which also have a strong tie with rainfall in the region. He also warned that Central America and other parts of the tropics could face increased fire risk due to the lingering impacts of El Niño.

While El Niño is a concern for the Amazon’s carbon reserves this year, a drying trend since 2000 has reduced the forest’s ability to store carbon even in non-El Niño years. If the trend continues, the forest could become a source of carbon emissions and hasten the pace of climate change.

You May Also Like:
Heat, Humidity Combine to Threaten Millions in Future
The Globe’s Hottest Year Just Keeps Getting Hotter
NASA Tracks Ships and Dust From 1 Million Miles Away
Study Says ‘Hydricity’ Could Boost the Use of Renewables