El Niño Again? This Is Why It’s Hard to Tell

The tropical Pacific Ocean is once again carrying on a will-it-or-won’t-it flirtation with an El Niño event, just a year after the demise of one of the strongest El Niños on record.

The odds right now are about even for an El Niño to develop, frustrating forecasters stuck in the middle of what is called the spring predictability barrier. During this time, model forecasts aren’t as good as seeing into the future, in part because of the very nature of the El Niño cycle.

The reason scientists try to forecast El Niño is because of the major, often damaging, shifts in weather it can cause around the world. The last one brought punishing drought to parts of Southeast Asia and Africa and torrential rains to parts of South America.

If another El Niño does materialize this year, it would be only the second time in the records that the Pacific went from the hot phase of an El Niño to the cold phase of a La Niña and then back to an El Niño again within three years. The relatively limited nature of those records, though, means researchers can’t be certain that such a combination is all that rare.

The tropical Pacific Ocean naturally vacillates between three different states about every three to five years. In its neutral state, warm water is pooled up on the western side of the basin, which fuels thunderstorms there. During a La Niña, the east-to-west trade winds that pile up that warm water intensify, amping up the normal conditions across the basin.

But during an El Niño, those trade winds relax or even reverse, allowing the warm water to spill to the eastern side of the basin, displacing storm activity toward the central Pacific.

To have confidence that an El Niño is in the offing, forecasters want to see both the ocean and the atmosphere getting into gear. While the eastern Pacific has shown some signs of warming in recent weeks, the atmosphere has yet to show signs that it is following suit.

Despite the fact that the major El Niño of 2015-16 was followed by a rather puny La Niña, the atmosphere seemed to see a lingering influence from that La Niña through the winter.

“That makes it hard for the ocean to warm up because the atmosphere is essentially trying to kick it back into a cooler state,” Michelle L’Heureux, an El Niño forecaster for the National Oceanic and Atmospheric Administration (NOAA), said. The atmosphere has only just started to look more neutral, she said.

Forecasters also aren’t seeing a big pocket of warm water below the ocean surface, which is needed to feed bigger El Niño events, though not necessarily weak ones. The presence of such a warm reservoir would give them more confidence that an El Niño was likely.

“We’re not quite seeing those indicators emerge on our radar yet,” L’Heureux said.

Consequently, the latest forecast from NOAA has equal chances — just shy of 50 percent — of continued neutral conditions or an El Niño developing in late summer or fall.

The computer models that simulate the physics of the climate system are more bullish on an El Niño than are forecasters because the forecasters know that the models just aren’t as good at predicting an El Niño development at this time of year — known as the dreaded spring predictability barrier.

“The spring barrier is this incredibly difficult thing to deal with,” L’Heureux said. It’s also somewhat tricky to define and tease apart.

Some of the lack of predictability comes from the fact that an El Niño tends to peak in late fall or early winter, and predictions become more difficult the further away from an event you are. But even predictions made in the spring for summer conditions aren’t very good, pointing to other factors at work.

Spring is also a time of transition, when any signal from the climate system is more difficult to pick out from the noise of weather because that noise is higher.

That difficulty also comes from the nature of the El Niño cycle itself. El Niño needs both the ocean heat and weak or reversed trade winds to come together to form, and those winds are much harder to predict further in advance. During a decaying El Niño, which happens in late winter and into spring, warm surface water drains north and south away from the equator, allowing colder waters to well up from below, Aaron Levine, a postdoctoral associate at NOAA’s Pacific Marine Environmental Laboratory, explained in a blog post. This tips the momentum of the system toward a La Niña, meaning that what the atmosphere is doing is less important. 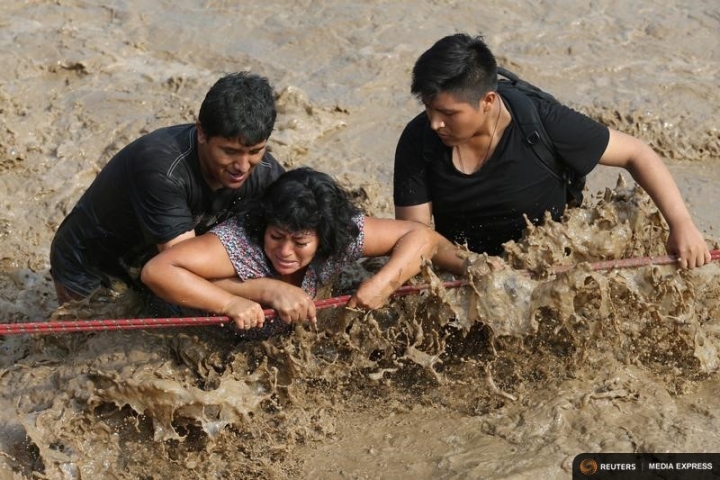 People cross a flooded road after a massive landslide and flood in the Huachipa district of Lima, Peru, on March 17, 2017, when a coastal El Niño ramped up rains.
Click image to enlarge. Credit; REUTERS Guadalupe Pard

Essentially, during the spring, the ocean is a lot less helpful at cluing forecasters into whether an El Niño might happen in the coming months.

Some research has suggested that the warming of the planet from the buildup of greenhouse gases in the atmosphere might lead to more strong El Niño and La Niña events. The limitations of computer models in fully capturing the behavior of the El Niño-La Niña cycle means that much remains unclear about how that cycle might change as the planet’s temperature continues to rise.

Warming could exacerbate the global weather impacts of El Niño and La Niña, though. For example, when temperatures are drier, any drought that occurs will be worse because that added heat leads to more evaporation. On the flip side, warming could also cause the heavy rains that fall in certain areas during an event to be even stronger, because a warmer atmosphere has more moisture available for those rains.

Models are partly more bullish than forecasters on the prospects of El Niño this year because of the extremely warm waters that popped up off the coast of Peru during a so-called coastal El Niño during the winter. Those waters reached 1.8°F (1°C) above normal and helped fueled intense rains that caused major flooding in the region.

While there have been instances where a coastal El Niño bled over into full-blown one, it’s not guaranteed, and temperatures along that coastal area have been fading over the past few weeks.

Current sea surface temperatures have been hovering around the 0.9°F (0.5°C) above-average threshold that defines an El Niño, but those temperatures need to persist for much longer for forecasters to feel comfortable issuing an El Niño watch, meaning conditions are favorable for it to develop over the next six months.

“Obviously as a forecaster we would like the system to make a decision,” L’Heureux said.

If an El Niño does materialize this year, it will be only the second time in 65 years of record keeping that such a back-to-back situation occurred. The other instance was in 1963 to 1965. But that record likely isn’t long enough to have captured the full range of how an El Niño can behave.

“Some of these behaviors aren’t incredibly unusual, it’s just that we haven’t had an opportunity” to observe them yet, Levine said. “Every new event gives us new information.”