NEW YORK — An emerging El Niño, along with other factors, is expected to tamp down hurricane activity during the 2014 Atlantic season, with a near-normal or below-normal number of storms predicted, the National Oceanic and Atmospheric Administration announced Thursday at New York City’s Office of Emergency Management. 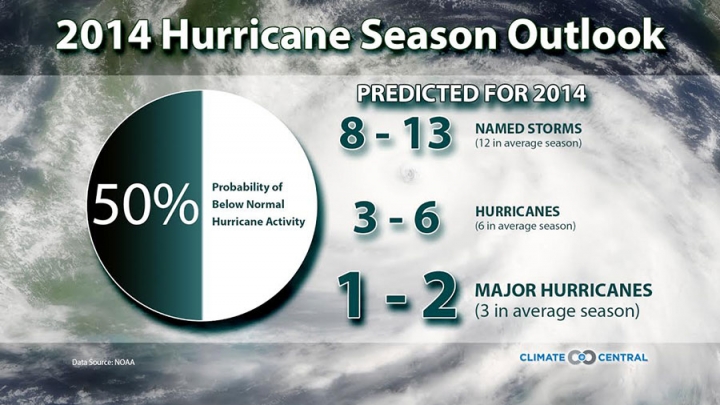 The six-month Atlantic hurricane season, which begins on June 1, has a 50 percent chance of being below-normal, according to the agency. NOAA forecasters expect between 8 and 13 named storms (those of tropical storm force or higher) to form, of which 3 to 6 are likely to become hurricanes. Only one to two of those hurricanes are expected to become major storms, or those of Category 3 or higher on the Saffir-Simpson scale of hurricane strength.

How climate change has been affecting hurricane activity has been a significant area of ongoing research, with some findings suggesting that it is making storms more frequent and intense. A recent study suggests that tropical cyclone activity is moving toward the poles and away from the tropics globally, though the pattern has been masked in the Atlantic by another pattern that ramps up hurricane activity for several decades at a time.

One warming-linked factor that is assuredly having effects on the impacts of tropical cyclones is sea level rise, which is intensifying the impacts of storm surge. In fact, it played a role in the surge from Hurricane Sandy, the impetus for announcing the seasonal forecast in New York.

“It’s fitting that we would announce our hurricane season outlook in New York City,” said Louis Uccellini, a Long Island native and director of NOAA’s National Weather Service. “Given the lasting impacts of Hurricane Sandy being fresh in everyone’s minds.”

The El Niño that is expected to develop as soon as this summer is the main factor pushing storm numbers down this year. The climate phenomenon, which is marked by warmer-than-normal sea surface temperatures in the eastern tropical Pacific Ocean, can affect the weather far away from that basin. It tends to cause strong wind shear, or differences of wind speed and direction at different heights in the atmosphere, which stymies the development of tropical cyclones.

El Niño also tends to make the atmosphere over the tropical Atlantic Ocean more stable, making it more difficult for the storm systems that come off the west coast of Africa to intensify and develop into tropical storms and hurricanes. 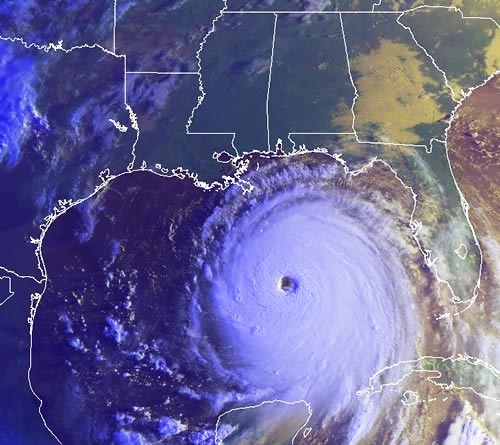 “We expect these trends to continue through the hurricane season as El Niño continues to develop and show what it’s true strength will be,” NOAA administrator Kathryn Sullivan said at the press conference, where officials also announced the agency’s new experimental tool that maps coastal storm surge threats as well as expected improvements to hurricane forecast models.

Near-average sea surface temperatures in the Atlantic are also expected to fight against a pattern of above-average activity that has been affecting the basin since 1995, Bell said.

Sullivan and other officials emphasized that even a season with a below-normal number of storms can produce a devastating hurricane. The 1992 hurricane season is perhaps the best example of that: The first, and only, major hurricane of the season, Andrew, wreaked havoc on southern Florida. It was the costliest hurricane in U.S. history until Hurricane Katrina hit in 2005.

Second behind Katrina in costs was Hurricane Sandy, which hit the New Jersey-New York area after transitioning to an extratropical cyclone (which has a different source of energy than tropical storms). It caused exceptional flooding in the New York City area, due to its tremendous storm surge.

No major hurricane has made landfall in the U.S. in more than 8 years — the last one was Hurricane Wilma in 2005. NOAA’s seasonal forecasts cannot say how many storms are likely to hit the U.S., as the factors that effect where a hurricane goes can be highly localized and change on the time scale of days.

Hurricane season forecasts don’t always pan out. The 2013 season, despite forecasts that it would see an above-average number of storms, turned out to be the least active hurricane season in the past 30 years by some measures. While there were an above-average number of named storms, dry air blowing off of Africa and a stable atmosphere kept storms from developing into strong hurricanes.