EIA’s Most Important Insights About Our Energy Future

The Energy Information Administration (EIA) released its biannual International Energy Outlook on Thursday, finding that through 2040, at least, fossil fuels will remain king, despite rapid growth in renewable energy sources.

The report projects that world economic output will increase by 3.6 percent per year, and world energy use will grow by 56 percent between 2010 and 2040. Half of that increase will take place in just two countries — China and India.

The graphic below shows just how much of the global growth in energy use will come from China, with the projection that by 2040, China’s energy use will soar to be twice that of the U.S. 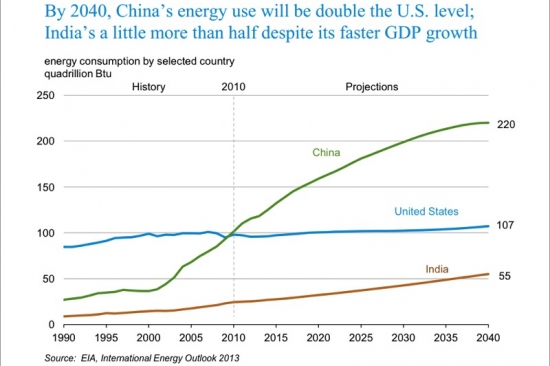 While renewable energy sources and nuclear power will be the fastest growing energy sources through 2040, the report calculates that fossil fuels, such as oil and coal, will still comprise 80 percent of world energy use.

Of the renewable energy sources, the report projects that wind and hydropower will see the fastest growth, with wind dominating in developed nations, and hydropower projects more limited to developing countries. By 2040, the report estimates renewables’ share of world energy use will be 15 percent, up from 11 percent in 2010.

Of the fossil fuels, the report forecasts that coal use, which is the most carbon-intensive fuel source for generating electricity, will grow faster than petroleum consumption until after 2030, mainly due to increasing coal use in China and a decline in oil use in the industrialized nations. After 2030, coal will comprise a lower percentage of total world energy use, but still be in second place behind petroleum and other liquid fuels.

The chart below shows these shifts taking place, with coal's share decreasing in the long term but still remaining a huge part of the global energy market. 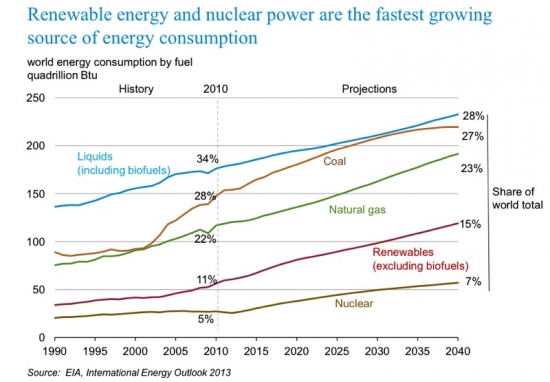 Additionally, the report projected that in the absence of additional policies to rein in planet-warming carbon dioxide (CO2) emissions, worldwide energy-related CO2 emissions will increase by nearly 50 percent by 2040, reaching 45 billion metric tons in 2040. The report didn't include the possibility of such policies due to uncertainties about when they might go into effect and how they would be structured, according to EIA's administrator, Adam Sieminski.

“The EIA tries to stay out of the business of forecasting policy developments,” Sieminski said at a press conference on Thursday.

The chart below shows which energy sources will be responsible for the most CO2 emissions. No surprise here — coal maintains its lead through 2040. 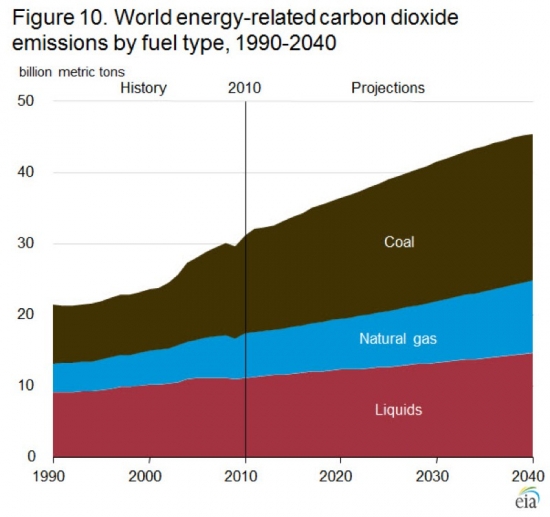 As far as nuclear power is concerned, the report estimates that most of the increase in nuclear power will occur in China, India, and South Korea, with China accounting for more than 40 percent of the global net increase in nuclear capacity. “The China story is an interesting one,” Sieminski said. “This is going to be a reach and a stretch I think for China to do this and to manage it.”

The chart below depicts the massive expansion in the Chinese nuclear sector, as well as growth in India and other nations. 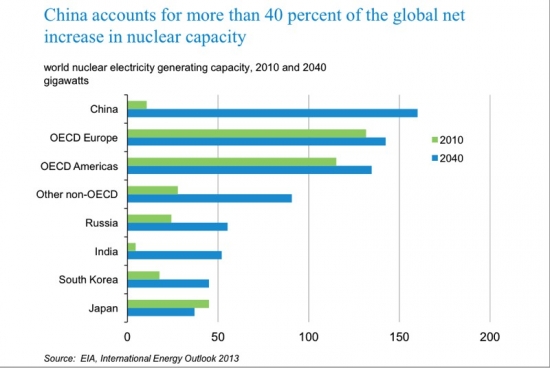 One of the biggest energy stories of the past decade has been the rise of natural gas production and use, particularly in the U.S., where new drilling technologies have given energy companies access to previously inaccessible natural gas deposits. The EIA report projects continued growth in the natural gas sector, with a large increase in developing countries' use of natural gas through 2040. 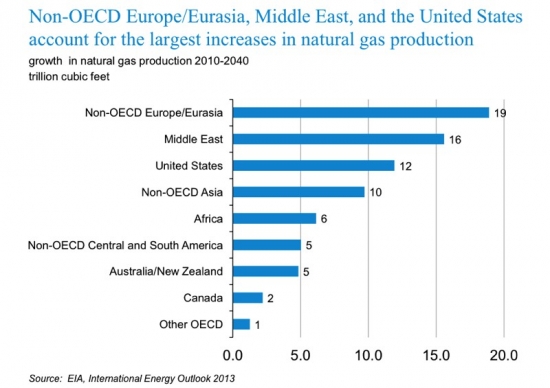