The weather news of the week was certainly the blast of cool air that once again set temperatures at comfortable levels across the eastern half of the U.S. That same air mass sent a storm system through the Northeast, spawning a rare Boston-area tornado. It also corresponded with another ridge of hot air hanging out over the western half of the country; the heat that has baked the West all summer has exacerbated California's record-setting drought and helped fuel wildfires across the region. Here we have some truly outstanding shots of the weather that affected the U.S. this week.

For the second year in a row, the area around Yosemite National Park has been plagued by wildfires that have popped up across California and parts of the Pacific Northwest amid record-setting heat and California’s ever-worsening drought.

The latest fire to hit Yosemite, dubbed the El Portal fire, started on July 26 and the cause is still under investigation. As of Aug. 1, the fire covered nearly 4,200 acres and was 58 percent contained.

The eerie, long-exposure photo below captured the flames burning across Yosemite’s rolling hills. One of the major concerns of the fire is the potential damage to the storied giant sequoias of the Merced Sequoia Grove.

This rainbow was photographed above Oregon’s awe-inspiring Crater Lake in the eponymous Crater Lake National Park after thunderstorms swept through the area. (Those same storms spawned lightning that ignited many of the wildfires that have burned across Oregon in recent weeks.)

Crater Lake, the deepest lake in the U.S., sits in a volcanic caldera — basically a big dent that forms when the ground collapses after a volcanic eruption. Specifically, the lake is situated in Mount Mazama, part of the Cascades chain of volcanoes. 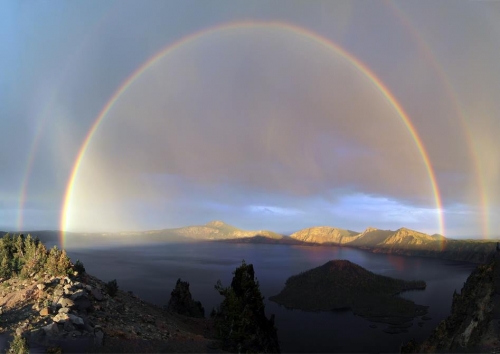 The tornado that hit Revere, Mass., on July 28 was the first in Suffolk county in recorded history (with records going back to 1950) and was rated an EF-2. The twister spun up as an intense low-pressure system tracked across the Northeast, part of the deep trough that brought cooler-than-normal temperatures to much of the eastern half of the U.S. this week.

Loads of photos of the damage wrought by the tornado circulated on Twitter and other social media on Monday, but perhaps the most unexpectedly impactful was one taken by Revere resident Doreen DiRienzo, who didn’t even know she was capturing the funnel cloud.

DiRienzo had stepped out to take some snaps of the darkest sky she had ever seen, reported Boston.com, as she was driving from East Boston. At an intersection, she took a snap and sent it to her son, who told her she had captured the tornado. Look at the photo again and you’ll see it there, the dark hulk of the cloud behind the streetlights. Terrifying.

DiRienzo said if she had realized she was headed right for the tornado, she would’ve turned around. In general, if you’re in a car when a tornado hits, you don’t want to be in it. Finding shelter in a sturdy building or a ditch nearby is a better bet.

As we all know, that most dreaded and deadly of weather events is the one that combines storms and ocean’s most dreaded predators: That’s right, the sharknado!

We kid, we kid. But we had to acknowledge the launch of the sequel of last year’s cult classic “Sharknado,” aptly and perfectly dubbed “Sharknado 2: The Second One.” Really, how else were we going to get Steve Sanders onto our site?

Interestingly, weather can actually cause the odd fauna to fall from the sky, though not a swarm of great white sharks — more like fish and frogs. Fish, for example, can be sucked up by a waterspout. The strong winds in the parent storm can carry the fish miles inland and drop them. Bet you didn’t think you’d actually learn something from “Sharknado,” huh?

So many celebs got devoured by sharks in #Sharknado2, and we had a blast watching http://t.co/p85NoNHFOt pic.twitter.com/zm8Ajzy0hA