Earthquakes ‘May Contribute to Methane Leaks’

LONDON – And here’s another shuddering twist to the horror story that is climate change: even earthquakes may play a role. Large quantities of methane may have escaped during a violent earthquake that shook the floor of the Arabian Sea in 1945, according to German and Swiss researchers.

David Fischer of the University of Bremen and colleagues from the Alfred Wegener Institute in Bremerhaven and the ETH in Zurich explored the region in a research ship in 2007, and began to examine cores of sediment from the seabed. 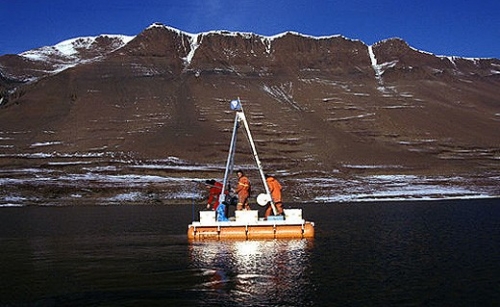 One core, from just 1.6 meters (5.25 feet) below the seabed, contained methane hydrate – an ice-like mixture of methane and water -  and the other did not. But, the researchers report in Nature Geoscience, both cores carried subtle chemical evidence that at some point in the past dramatic quantities of methane or natural gas had actually flowed through the sediments beneath the Arabian Sea.

Since the methane would move as a gas, there is only one direction it could go: bubbling upwards through the sea into the atmosphere. And since methane is a potent greenhouse gas – at least 23 times more potent than carbon dioxide – such escapes could be significant.

“We started going through the literature and found that a major earthquake had occurred close by in 1945”, said Dr. Fischer. “Based on several indicators, we postulated that the earthquake led to the fracturing of the sediments, releasing the gas that had been trapped below the hydrates into the ocean.”

The tremor was recorded at magnitude 8.1 – magnitude 9 is about as bad as an earthquake can be – and seismic waves would have raced through the seabed at colossal speeds, quite enough to shake loose any brittle chemical structures in the seabed.

The researchers estimate that the release of methane from that location since that one event could be conservatively estimated at 7.4 million cubic meters: this is roughly the capacity of 10 large gas tankers.

This calculation does not take into account how much escaped during the quake itself, and it holds for only one location. “There are probably even more sites in the area that had been affected by the earthquake,” said Dr. Fischer. 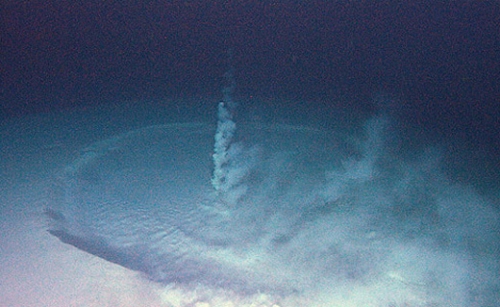 Methane gas bubbling out the top of an undersea mud volcano in the Gulf of Mexico.
Credit: NOAA

Such research is another reminder of the complexity of the planet’s climate system. Methane hydrates can be considered as a form of fossil fuel: decayed plant material from millions of years ago, trapped in the mud under the pressing weight of the sea.

Climate scientists have for decades worried about the fragility of these hydrates – as the world warms, they are likely to be released in huge quantities from the Arctic seabed, for instance – but this is the first evidence that natural rather than human-triggered cataclysms could make a serious difference to the global carbon budget.

The lesson is that scientists now have to take such processes into account as they try to calculate the carbon budget for the planet – the quantities of greenhouse gases released into the atmosphere, the volumes subsequently absorbed by plants and then incorporated into sediments.

“We now provide a new mechanism of carbon export that had not been considered before”, said Dr. Fischer, and with his co-authors he pushes the message home in the research paper. “We therefore suggest that hydrocarbon seepage triggered by earthquakes needs to be considered in local and global carbon budgets at active continental margins.”