One Great View of Earth for the Summer Solstice

Planning to host a party for the summer solstice tomorrow? Here’s a view that will help build some excitement, courtesy of a satellite positioned about 36,000 miles from the Earth’s surface.

Brian McNoldy, a tropical storm researcher at the University of Miami, grabbed an image of the Earth as GOES-West, a satellite operated by the National Oceanic and Atmospheric Administration, that shows the Earth at local midnight last night. It beautifully highlights the earth forming a perfect crescent as the midnight sun beams down on the far northern reaches of the globe. 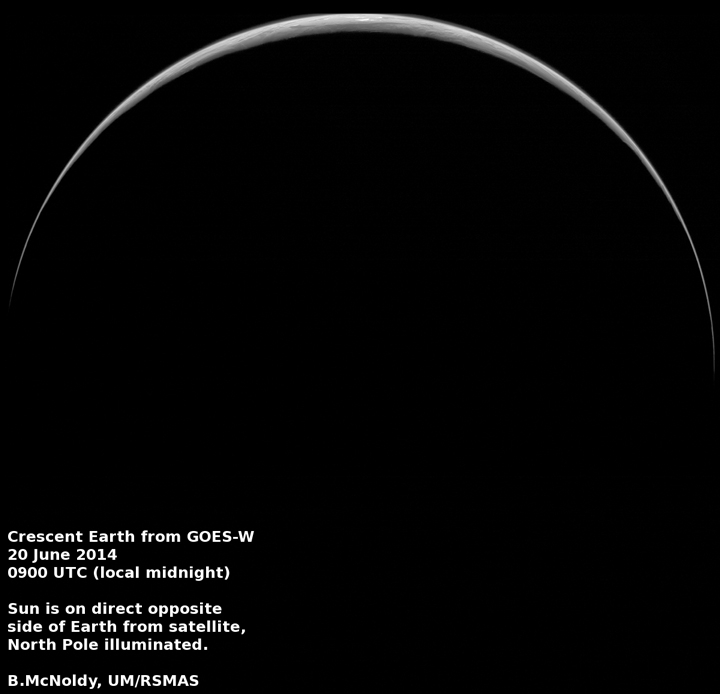 An image of the midnight sun over the northern reaches of the western half of the globe.
Credit: Brian McNoldy

While the solstice is officially at 6:51 a.m. on Saturday, McNoldy explained in an email that the image captured is a pretty close representation of what it will look like from the same vantage point. In other words, this is a solstice drill that’s as close to the real thing as possible.

McNoldy also shared another bit of trivia: you won’t see a similar view from the opposite side of the planet. GOES-West, which in satellite parlance sits in a geostationary orbit above the 135°W meridian, snaps a full Earth picture at local midnight everyday. However, GOES-East, its aptly-named partner on the other side of the planet, operates on a slightly different schedule and the closest you’ll get to this view is a photo taken at 12:45 a.m. local time. That view, while still pretty spectacular, would show a warped crescent as opposed the perfection of GOES-West's view.

Feel free to add that to your trivia game at your solstice party.

The solstice is commonly referred to as the longest day of the year, a statement that leaves most folks in the Southern Hemisphere shaking their heads. A more accurate description of the solstice is that due to the position of the Earth’s orbit around the sun, the North Pole will be angled as close to the sun as possible this year. That makes it seem like the longest day of the year in the northern hemisphere but the shortest in the southern hemisphere. After Saturday, the two hemispheres’ luck will start to reverse which each day getting shorter in the northern half of the globe and longer in the southern half.

You can put that in your trivia game, too. And in the vein of previous Friday diversions, here’s a tune (or two) to accompany your solstice thoughts.