Dust in the Wind Could Speed Greenland’s Ice Melt

Despite it’s name, Greenland is predominantly white, as snow and ice cover the majority of the country. New research indicates that Greenland’s main color may be starting to fade and in fact darken, though, thanks to a widespread increase of dust across the ice sheets. That darkening could speed up surface melt, and with it, sea level rise around the globe. 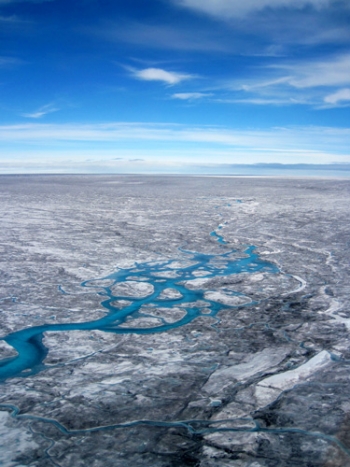 Meltwater channels run along the ice in Greenland. Soot, dust and microbes that live in the ice all contribute to its darkening.
Credit: Henry Patton/Flickr

More than three-quarters of Greenland is covered by a massive ice sheet that’s up to 2 miles thick in spots. It contained 684,000 cubic miles of ice, which if it all melted, would raise global sea levels by up to 24 feet.

Recent research has suggested that melt is increasing along the ice sheet’s edges where glaciers flow out to the sea. That melt already accounts for about 30 percent of current sea level rise, which has been 8 inches since the 1880s, though the rate has been increasing in recent decades. But the main body of the ice sheet has been relatively stable in comparison, as its high elevations and location at high latitude mean temperatures stay at or below freezing nearly year-round.

Snow and ice are also highly reflective, bouncing incoming solar radiation back into space. That adds an extra layer of defense from melting.

But new research published Sunday in the journal Nature Geoscience indicates that the glow might be fading, particularly in the springtime since 2009 compared to the 2003-2008 average brightness. A combination of soot, dust and microbes are darkening snow and increasing the odds of more widespread melt. Soot and dust are called out in particular in the study.

Of the two, soot absorbs light and heats up snow much more effectively than dust. Summer forest fires in North America and Russia are the primary sources of soot on Greenland’s ice sheet. Soot from fires in Siberia was one of the main drivers behind a nearly unprecedented melt event in July 2012, when 95 percent of the ice sheet’s surface underwent melting for a week.

Similar conditions have developed this year, with lowest April snow extent ever recorded in Eurasia according to a recent update from the National Snow and Ice Data Center. Other areas also saw below average snow extent, which coupled with warm and dry conditions helped fuel wildfires that deposited soot on ice in Greenland and other parts of the Arctic.

Marie Dumont, a scientist at France’s meteorological agency who led the new study, said that there’s a potentially much higher amount of dust than soot on the ice sheet, which means it could have the same overall impact as soot.

Dumont and her team analyzed satellite and snow data, which show a general increase in the amount of dust in the Arctic atmosphere and a high amount of dust being transported to Greenland from other parts of the Arctic. Measurements taken at a site in northeast Greenland also show that in 2009 and 2010, dust was more than 150 times more prevalent on the ice than soot. That can’t necessarily be extrapolated for the rest of the ice sheet, but, Dumont and her colleague wrote in the new study, “it corroborates that dust is probably a significant absorber in Greenland snow.”

The study suggests that the culprit behind increased dust transport in the springtime is earlier snowmelt in other parts of the Arctic and the Northern Hemisphere.

“Dust gets transported to the Arctic by wind in the atmosphere. High latitude sources of impurities can easily be redeposited on Greenland’s surface,” Dumont said in an email. 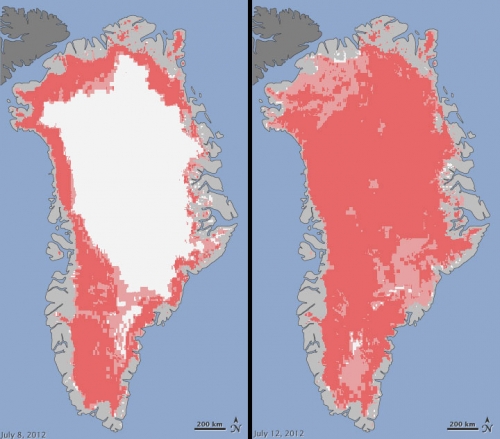 The study noted that as the climate continues to warm, spring snowmelt will only become more widespread and will happen earlier, which could send more dust to Greenland’s ice sheet and increase the likelihood of widespread melt events.

Jason Box, a glaciologist at the Geological Survey of Denmark and Greenland who didn’t work on this study, has been said that his own work leading the Dark Snow Project has also shown that even a small shift in these variables could have big downstream effects on both the present and future of the ice sheet.

Dumont and her colleagues modeled what these impacts would look like, and found that a relatively minor decrease in the brightness of the ice sheet could cause double the average yearly rate of ice loss seen over the period 1992-2010.

The impact of those changes would extend beyond Greenland. Ocean levels are projected to rise 1-4 feet by 2100 depending on future warming and how Greenland’s ice sheet and other ice and glaciers around the globe react.

“Because models used to project climate don't include this and several other feedbacks, the increase in melt from Greenland is probably faster than the models project.and because we're talking here about a positive feedback mechanism, the Greenland melt increase can be non-linear. So, sea level rise projections are probably underestimates,” Box said in an email.