The lungs of the planet are drying out, threatening to cause Earth to cough up some of its carbon reserves.

The Amazon rainforest inhales massive amounts of carbon dioxide from the atmosphere, helping keep the globe’s carbon budget in balance (at least until human emissions started throwing that balance off). But as a new study shows, since 2000 drier conditions are causing a decrease in lung capacity. And if the Amazon’s breaths become more shallow, it’s possible a feedback loop could set in, further reducing lung capacity and throwing the carbon balance further out of whack. 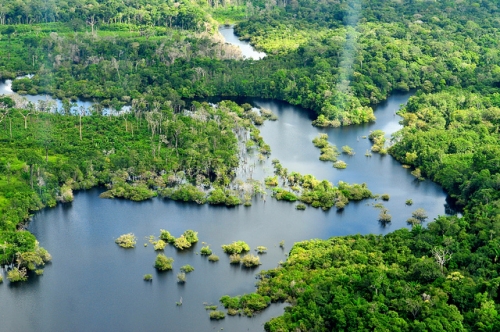 Aerial view of the Amazon rainforest near Manaus, the capital of the Brazilian state of Amazonas, Brazil.
Credit: CIFOR/Flickr

The study, published in the Proceedings of the National Academy of Sciences on Monday, shows that a decline in precipitation has contributed to less healthy vegetation since 2000.

“It’s well-established fact that a large part of Amazon is drying. We’ve been able to link that decline in precipitation to a decline in greenness over the last 10 years,” said Thomas Hilker, lead author of the study and forestry expert at Oregon State University.

Since 2000, rainfall has decreased by up to 25 percent across a vast swath of the southeastern Amazon, according to the new satellite analysis by Hilker. The cause of the decline in rainfall hasn’t been pinpointed, though deforestation and changes in atmospheric circulation are possible culprits.

The decrease mostly affected an area of tropical forest 12 times the size of California, as well as adjacent grasslands and other forest types. The browning of that area, which is in the southern Amazon, accounted for more than half the loss of greenness observed by satellites. While the decrease in greenness is comparatively small compared with the overall lushness of the rainforest, the impacts could be outsize.

That’s because the amount of carbon the Amazon stores is staggering. An estimated 120 billion tons of carbon are stashed in its plants and soil. Much of that carbon gets there via the forest flora that suck carbon dioxide out of the atmosphere.

Worldwide, “it essentially takes up 25 percent of global carbon cycle that vegetation is responsible for,” Hilker said. “It’s a huge carbon stock.”

Dry years can lead to huge carbon losses. During a severe drought in 2005 — an El Niño year — the Amazon lost an estimated 1.6 gigatonnes of carbon, slightly less than Russia’s annual carbon dioxide emissions.

Hilker and his colleagues identified El Niño years like 2005 as particularly “down” years for vegetation, with the opposite being true for La Niña years.

Some future projections indicate that climate change could make “super” El Niños twice as likely, which could increase the odds of drought. Hilker cautioned that more research is needed to fully understand the connection between El Niño and drought, since his team only analyzed data covering 2000-2012. He also said that while the drought currently affecting Sao Paulo's water supplies certainly fits with the broader pattern, it wasn't included in the study itself so it was hard to draw any definitive conclusions.

The study does note that because the poles are warming faster than the tropics, it could pull the band of rain that waters the Amazon and other parts of the tropics further north, increasing the odds of Amazonian drought and, with it, an uptick in carbon emissions.

“An Amazon already responding to drought is big news for climate. Maybe a small part of that signal is actually due to deforestation, but that still implies a loss of forest productivity that influences how the Amazon forest impacts climate globally,” said Abigail Swann, a climate and ecosystems researcher at the University of Washington.

“The authors are able to retrieve more data than before, which gives them greater statistical power to draw conclusions from,” Swann said, who wasn’t associated with the study.