The heat wave that has built across the eastern U.S. — roasting cities from Memphis to Washington to Boston in a stifling blanket of heat and humidity — has had one strange characteristic that meteorologists cannot yet explain in a long-term climate context. Rather than moving west to east, as typical weather patterns do in the Northern Hemisphere, weather systems across the country have moved in the opposite direction, like a drunken driver on a dark stretch of highway, drifting from east to west during the past two weeks.

And like drunk driving, the weather pattern is having serious —  even deadly — consequences, with at least one death being blamed on the heat, according to the Associated Press.

The “Bermuda high” that often pumps warm and humid air into the East Coast during July and August decamped around July 11 from Bermuda and came ashore, eventually migrating all the way to the Midwest by July 15. The summertime high pressure ridge, sometimes referred to as a “heat dome,” has set air pressure records as recorded by weather balloons in Pittsburgh and Virginia, and has been responsible for sending air temperatures rocketing into the mid- to upper-90s, and even the lower triple digits, in some parts of the East.

Animation of 500 mb pressure anomalies from July 12 to July 18, 2013, showing the migration of the heat dome from east to west (in orange and red) and the upper level low toward Texas (blue). Credit: Ryan Maue for Weatherbell.com.

New York’s John F. Kennedy Airport, for example, broke a daily high temperature record on Thursday, with a high of 100°F. The heat index, which is a measure how the temperature feels to the humid body, has reached the dangerous range of 105 to 115°F in some spots. Heat is the No. 1 weather-related cause of death in the U.S. in an average year.

Making the heat even more dangerous is that many areas affected have not been getting overnight relief. In New York’s Central Park, the overnight low on Wednesday night into Thursday morning was 79°F, tying a record for the highest such temperature for the date. Record-high low temperatures were also set in the Midwest and Mid-Atlantic. Washington, D.C. may challenge a record for the longest number of consecutive hours with air temperatures above 80°F.

The National Weather Service issued heat warnings and advisories for nearly two-dozen states on Thursday, with a smaller number to be affected on Friday in the densely populated Mid-Atlantic and Northeast.

While heat waves during July are nothing new, the weather pattern that is creating this one is rare enough for meteorologists to take note. In addition to the Bermuda leaving its more tropical locale and camping out in Michigan, an area of low pressure at the upper levels of the atmosphere has also been roaming the U.S. since July 11, drifting from east to west, traveling from the Mid-Atlantic states to Texas, where it brought some welcome rainfall. 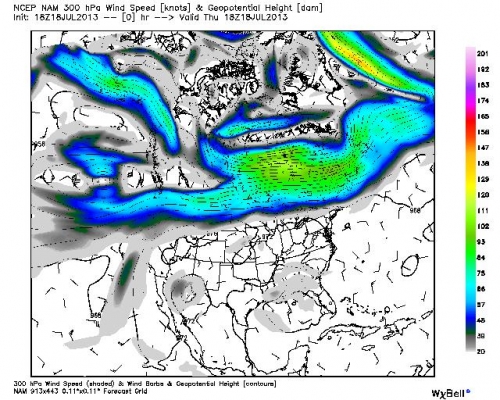 With the jet stream (in blue and green) located far to the north, over Canada, weather systems have drifted from east to west across the U.S.
Credit: Weatherbell.com.

The air flow heading in the opposite direction across the U.S. is abnormal, as is the strength of the dome of high pressure. In recent years there have been numerous instances of strong and long-duration high pressure areas that have led to extreme weather events, including the Russian heat wave of 2010. According to NOAA, scientists are scheduled to meet at Oak Ridge National Laboratory in September to explore whether such “monster ridges” of high pressure are becoming more frequent or more intense as the atmosphere warms in response to manmade greenhouse gas emissions.

Jon Gottschalck acting chief of the Operational Prediction Branch at NOAA’s Climate Prediction Center, told Climate Central in an email that it’s not yet clear exactly how unusual the recent weather pattern has been, or what has been driving it. “Yes, the evolution you describe of the upper-level low and high pressure ridge moving east to west is definitely unusual. But it is not easy to quantify really how unusual,” he said.

“It would take considerable time to crunch through the data and utilize a methodology to accurately pick events like this that have occurred in the historical record and quantify [them]. From a climate-forcing perspective, there is no clear climate pattern right now that we can point to as a contributing factor and so we can really only attribute this evolution to natural internal variability, at least at this stage.”