No Recovery, But a Sliver of Drought Gain for Calif.

The phrase “abnormally dry” might conjure up a skin condition or your preferred type of martini. But it might just be the most positive words uttered in months about California’s relentless drought. According to the U.S. Drought Monitor released Thursday, a tiny sliver of the Golden State is no longer in drought, the first time that’s happened since late April.

“Abnormally dry” is what the Drought Monitor uses to describe areas on the fringes of drought. This week’s Drought Monitor shows a fraction of land in northwest California — less than 1 percent of the state — is just abnormally dry, a small victory for a state that has been 100 percent locked in drought since the third week of April. It’s the slightest of improvements in one of the worst droughts on record for the state that has caused an estimated $2 billion in losses and literally moved mountains. Some research has indicated that the atmospheric phenomenon contributing in large part to California's drought, the Ridiculously Resilient Ridge, could be an artifact of climate change. 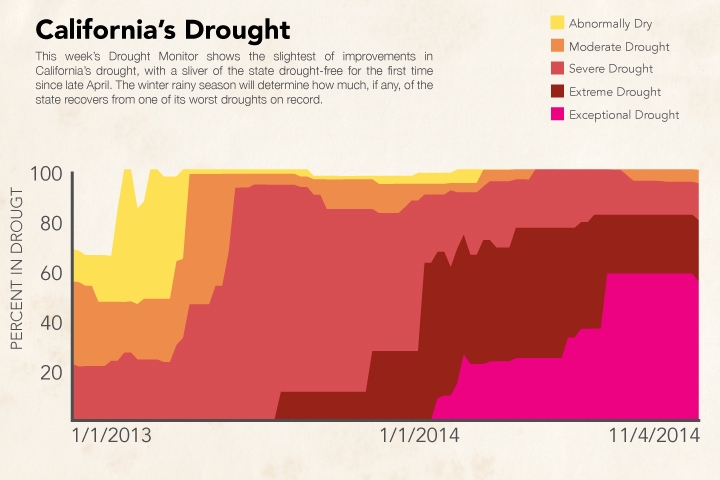 The improvement comes courtesy of up to 2.3 inches of rain that fell across the northern reaches of the state in the past week. That’s a far cry from the 9 inches or more that the same storm brought to Washington state but it was enough to green lawns and spread a little drought relief. The recent rains also brought another positive milestone: for the first time since July, less than 80 percent of the state is in extreme or exceptional drought, the two worst categories listed by the Drought Monitor.

The rains herald the start of the wet season for the state. How much precipitation falls in next few months will, in large part, determine if the drought persists for another year.

But before you start buying almond milk again, it’s worth remembering that the categorization of abnormally dry does not mean an area (or the state for that matter) is out of the woods.

Take Trinity Lake, located in northwest California and one of the state’s largest reservoirs, for example. In October, the reservoir saw near normal inflows from the Trinity River that feeds it. That’s the good news. The bad news is the reservoir is still only at 23 percent capacity, meaning a lot more rain is needed to get things back to normal.

Strong snowpack in the Sierra Nevada mountains is in some ways even more crucial than rain. It essentially works as a reservoir, doling out water through the spring and summer months.

And the Sierras are still mired in exceptional drought. According to Matthew Rosencrans, a National Oceanic and Atmospheric Administration (NOAA) meteorologist who wrote this week’s Drought Monitor, those areas would need 12-15 inches of precipitation on top of the 3-5 inches of precipitation they normally receive over the next few months. Other parts of the state would need anywhere from 3-9 inches to move the drought needle toward recovery he said.

For the next month at least, that needle’s not likely to move much. Some improvement is possible in the next 3 months, particularly in northwest and southeast California, but full recovery is unlikely. Mike Halpert, the acting director of NOAA’s Climate Prediction Center told Climate Central last month that because the drought is so extensive, “there’s still going to be large parts of drought in California when the winter’s over.”

The case of the dawdling El Niño further dims the prospects of large-scale recovery as does the record heat that continues to grip the state. Maybe a martini isn’t such a bad idea for drought-weary Californians after all.

You May Also Like:
Waiting for El Niño. Still. Again.
An Inside Look at How Monster Tornadoes Can Form
Voters Weigh In on Fracking, Water Measures
2014 Will Go Down As Hottest In California’s History