The Aral Sea has been dying a long, slow death. This summer, another nail was driven into its coffin.

Starting in the 1950s, when Soviet authorities began programs that diverted water from its tributaries, the inland lake in Central Asia — once the fourth largest in the world, bigger than Lake Huron — has been shrinking. This summer, the eastern lobe of the remnant lake completely dried up for the first time in modern history.

While the diversion of river water is the main culprit behind the gradual but persistent disappearance of the lake, a drought in the area finally finished off the disappearing act of one of the lake’s remnants, said Mathew Barlow, an associate professor at the University of Massachusetts, Lowell, who studies the region’s climate.

The Aral Sea, situated between Kazakhstan and Uzbekistan, is fed by the Amu Darya and the Syr Darya rivers. The water in those rivers is in turn supplied by snows that fall in the winter months in the Pamir and Tien Shen Mountains.

“That region really only gets winter precipitation,” Barlow said.

The rivers were diverted by the USSR to provide irrigation for water intensive agriculture like cotton and wheat in what is naturally an arid climate, which also ensured much of that diverted water was lost to evaporation. By 1960, the lake was already starting to shrink, and by 2010, its surface area had decreased by 88 percent and it’s volume by 92 percent. 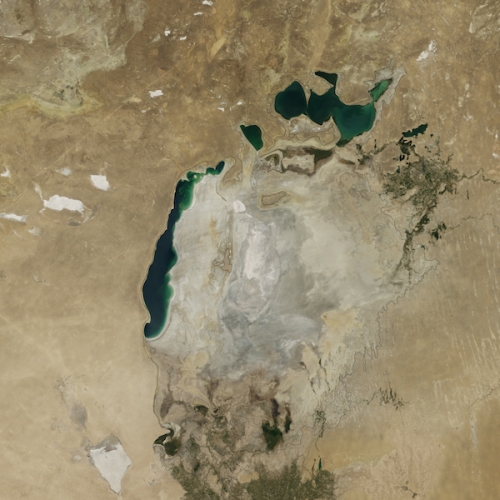 The Aral Sea as it appeared on Aug. 19, 2014, after its southeastern lobe dried up completely for the first time in modern history. The image was taken by NASA's Terra satellite.
Click image to enlarge. Credit: NASA

As the lake shrank, it separated into a series of smaller lakes, first into a north and south basin, and then into ever-smaller segments. It also became more susceptible to the vicissitudes of climate, like the drought that hit the mountains last winter.

“Only recently has it gotten small enough that year-to-year variations in drought have gotten visible,” Barlow told Climate Central.

While some recent years were wet enough to allow a slight expansion of the eastern lobe of the south basin, the lack of snows last winter and already diminished nature of the basin set it up to dry out completely.

The basin is “basically desert now,” Barlow said. What were once islands in the middle of the lake are islands no longer. The barren sight was caught by NASA’s Terra satellite orbiting overhead.

Barlow and his colleagues are looking into what larger climate forces are behind the drought. He said the drought is actually part of a larger regional pattern of drought in the Middle East and Central Asia in recent years, and could potentially be connected to factors like El Niño and other similar climate patterns.

“We’re interested in how that all hangs together,” he said. 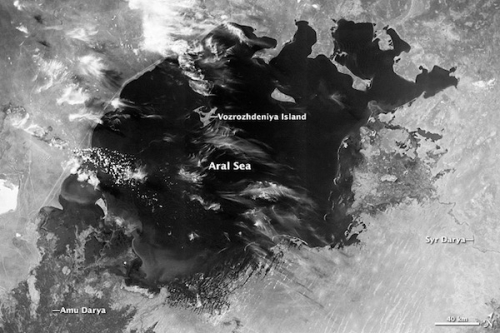 The Aral Sea as it looked in 1964, before diversions of its two main tributaries for irrigation had caused the lake to significantly shrink.
Click image to enlarge. Credit: NASA/USGS/U.S. Air Force

Whether this drought will continue is unclear. If the El Niño that is struggling to develop finally emerges in full force this winter, Barlow said he would expect it to be a wet season for the region. If the drought continues, some of the small areas of water left could shrink further, though Barlow said he could only speculate on what would happen.

The continued desiccation of the lake has had a significant impact on the climate of neighboring countries. Once a feature that moderated the area’s climate, the diminished lake now provides an ample source of salt and dust that frequently blows onto surrounding lands, and allows for much wider summer-to-winter temperature extremes.

Though Barlow has studied the area for several years, the scale of change at the Aral Sea still impresses him — “just the fact that humans have managed to drain the fourth largest lake in the world,” he said.

You May Also Like:
A Timeline of 2013 Extreme Weather and Global Warming
Obama at Summit: ‘We Have to Answer the Climate Call’
Is The World’s Main Climate Goal Misguided?
2014 on Track to be Hottest Year on Record