The U.S.: A Nation Divided By Drought

What was once a coast-to-coast drought now divides the U.S. into two distinct pieces, pitting those that have water in the Midwest vs. the have-nots in the West. One of those regions is in for a long, hot, dry, and potentially smoky summer. (Hint: It's not the Midwest.)

This national drought picture comes from two new reports released on Thursday from the National Oceanic and Atmospheric and Atmospheric Administration (NOAA), which updated the weekly U.S. Drought Monitor that shows weekly drought conditions across the country, and the Seasonal Drought Outlook, which provides a three-month forecast that is based on current conditions and the expected precipitation and temperatures for June, July and August. 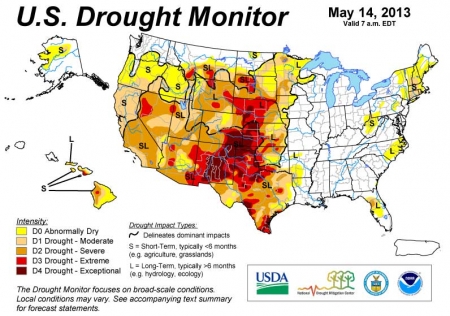 “Drought continues to plague large areas of the U.S.,” said Jake Crouch, climatologist at NOAA’s National Climatic Data Center, on a conference call with reporters. “There has been an expansion of drought westward, with those drought conditions in the Midwest all but disappearing.”

The nine-state area of the Midwest that stretches from Kentucky to Michigan and Missouri to Minnesota has seen a dramatic reduction in drought since early March, aided by an usual weather pattern that brought repeated rain and snowstorms during the spring.

Since March 5, the percentage of the Midwest in “moderate drought” or worse has declined from 45 percent to 10 percent, and the areas of extreme and severe drought have almost all been eliminated. Michigan and Wisconsin both saw their wettest January to April period on record. Duluth, Minn., picked up 50.8 inches of snow in April, breaking its all-time snowfall record for a single month, and shattering its record for the snowiest April.

Total precipitation across the West so far this year (left) along with the percent of average precipitation for the same period.
Click image to enlarge. Credit: NOAA.

The wet Midwest has contrasted sharply with the dryness in the West, where California saw its driest January-to-April period on record.

According to the drought outlook, the Midwest is expected to remain drought-free this summer. Much of the High Plains may also see some improvement, as those states typically receive the bulk of their precipitation during this time of year.

The U.S. as a whole has been drier than average this year to date. Most of the West, Southwest, and New England are all facing 90-day precipitation deficits, which have dragged down the national average.

The most recent Drought Monitor shows that nearly all of the land west of Iowa and south of Montana is still under some form of drought. More than 78 percent of Wyoming is still under severe drought or worse.

Low snowpack in the Northern Rockies allowed parts of southern Montana to slide into “extreme” drought, and “exceptional” drought continued to expand in the areas that encompass the intersection of Colorado, New Mexico, Kansas and Texas.

The dry conditions across the West have elevated the risk for wildfires. NOAA has issued a hazard outlook for wildfires in eastern New Mexico for the period between May 18-22. Last year was one of the worst wildfire seasons on record. According to the National Interagency Fire Center, wildfires in 2012 burned more than 9 million acres of federal land, making it the third-largest burn year since 1960. As the world continues to warm from climate change, wildfires across the West are expected to become more frequent and severe.

The Midwest had a very wet April, which effectively ended the drought in some areas.
Credit: NOAA.

The seasonal drought outlook calls for the drought in the West to continue to expand and intensify. The three-month forecast calls for above-average temperatures and below-average precipitation over most of the existing drought area. The end-of-season snowpack in the West is spread unevenly — there is an average amount of snow in place over small parts of Colorado and Washington State, but most of the snow cover is much thinner than average, if it exists at all, in Arizona and New Mexico.

“This is the part of year when snowmelt becomes an important factor, and many of those locations have dismal snowpack,” said Crouch. “Arizona and New Mexico have below-average water in their reservoirs at this time, and snowmelt will not replenish those numbers.”

As the drought drags on, its impacts are being felt more acutely on water supplies. According to the Southern Plains Regional Drought Outlook, three of the four largest reservoirs in New Mexico are at less than 15 percent of storage capacity. The largest, Elephant Butte, is at only 11 percent of capacity. Across the state, streamflow forecasts are less than half of normal.

Texas is expected to enter the summer with its fewest amount of stored water in at least 25 years, with statewide reservoir capacity at just 66 percent, or 12 percent less than at the same time last year, NOAA reported.

In the Southwest, some relief might come from the summer monsoons that blow off the Pacific Ocean in mid-July, but experimental outlooks of monsoon-related precipitation show below-average precipitation likely in much of northern and eastern New Mexico, with more abundant rainfall possible beginning in mid-summer in the southwestern part of the state.