The remnants of two tropical systems — one from the Gulf of Mexico, the other just west of Baja California — are expected to serve as wells of moisture fueling rains this weekend over portions of the country’s two main drought hotspots, namely parts of the Southern Plains and Southern California. But while those rains could make dents in the Plains drought, they are likely to make little difference in California, local weather experts said.

The progression of the drought in California through the spring and summer of 2014, as the two highest categories, extreme and exceptional drought, grew.
Click image to enlarge.

Both the Southern Plains and California have been locked in drought for several years. While cool, wet summer weather has gradually eased the drought in parts of Oklahoma and Texas, California’s drought has only metastasized after a winter rainy season that saw little rain and a hot, dry summer. The entire Golden State is in some form of drought, affecting more than 37 million people. More than 80 percent of the state is in the worst categories of drought recognized by the U.S. Drought Monitor.

The weather situation in play this weekend mirrors that dichotomy: While the remnants of Tropical Storm Dolly are expected to fuel rains that will help chip away at the drought in the Southern Plains, the potential impact of Norbert, currently a hurricane, may simply be localized flash flooding that does nothing to fill Southern California’s reservoirs.

Dolly’s remnants are funneling moisture into a frontal system expected to bring rainfalls of 1 to 2 inches to western Oklahoma and the Panhandle, along with the Texas Panhandle. Those rains could help beat back some recent drought flare-ups in the area that came after a return to normal hot summer temperatures in August, after a cooler June and July, said Oklahoma state climatologist Gary McManus in a daily email update on the region’s weather.

The moisture injected from Dolly into a stalled front over the area is enough to bring those drought-easing benefits without the widespread flash flooding that can happen when a tropical system makes a more direct hit and brings more intense rainfalls, McManus told Climate Central in an email.

Those intense rainfalls and flash floods are just the situation parts of Southern California could face as moisture from Hurricane Norbert is funneled northward, though “there’s a fair amount of uncertainty still attached to the precipitation totals,” said Phil Gonsalves, a forecaster with the San Diego National Weather Service office.

“And it does depend on exactly what track Norbert takes,” he said. Currently that track has Norbert skirting the coast of Baja California, gradually losing strength to become a tropical storm by late Saturday and a tropical depression by late Monday.

Any moisture from Norbert that makes it over the area is expected to bring locally heavy rains, especially to mountainous parts of Southern California and could cause flash flooding.

The setup is not an unusual one for this time of year in the area, Gonsalves told Climate Central: “Those types of events occur with a fair amount of regularity in the mountains here in Southern California in the summertime,” as the area is in a regime that leaves it susceptible to moisture coming in from the south and southeast. 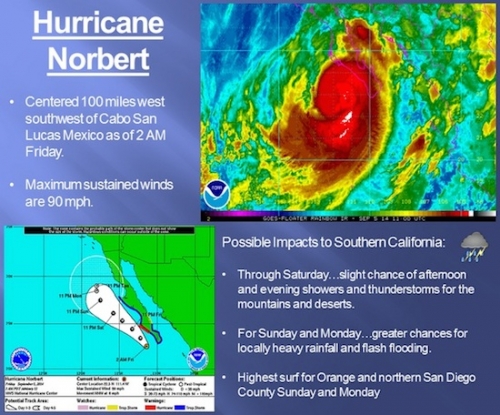 An extreme example of this happened in the area in early August, when flash floods fueled by rains that fell at peak rates of 3 to 4 inches per hour wiped out parts of Mt. Baldy, Calif. — the NWS deemed it a 1-in-500-year rain event.

Such intense rains won’t do anything for the drought, though.

The ground is so baked from lack of water and hot weather that it can’t absorb such heavy, fast-falling rains quickly enough, meaning much of the water simply runs off. The water might help local vegetation in the short-term and some water will seep into the ground, potentially aiding underground water tables, but it won’t do anything to help fill reservoirs and provide water for human consumption, Gonsalves said.

California’s best hope for moving out of such severe drought rests largely on an El Niño that is struggling to develop. Strong El Niños are associated with a revved up winter rainy season in Southern California, but models right now suggest that if this El Niño does develop, it will be a weak to moderate one. Combined with the lack of drought aide this weekend, it’s not exactly what drought-weary Californian’s want to hear.