The riot of colors that erupts on trees each fall drives billions of dollars in tourism and remains a key way for people to connect with nature. But that simple transition from summer’s lush greens to fall’s brilliant reds, oranges and yellows can be impacted in surprisingly complex ways by weather and climate, and those effects may be even more pronounced in the decades to come. 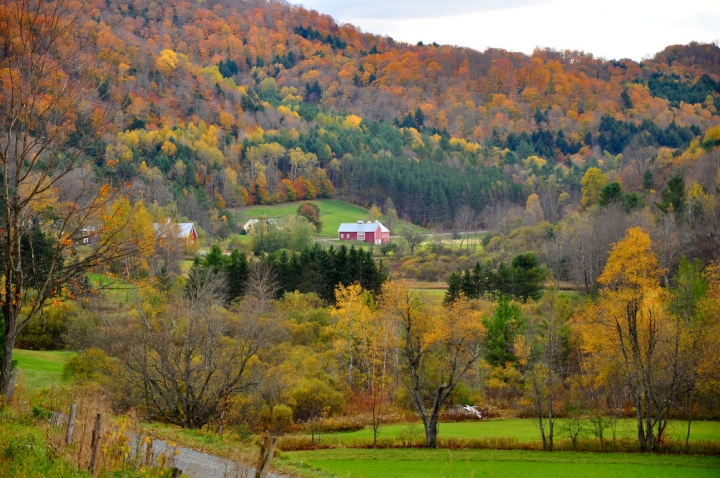 This year, drought across New England and the Southeast has led to the earlier appearance of color in some areas, but later in others, depending on factors like the severity of the drought and the particular species of trees affected. Climate change, through changes in temperature and precipitation, could have similarly complicated impacts on fall foliage, experts say, which could impact tourism and views people see outside their doors.

“There’s not a simple story,” John Silander, a plant ecologist at the University of Connecticut, said.

As autumn rolls around, a variety of cues — including the shortening days and falling temperatures — tell trees that it’s time to begin shutting down for the winter and preserving their nutrients for the next growing season. The trees stop producing the chlorophyll that makes their leaves green and is a key part of the photosynthesis that provides them with food. Left behind in the leaves of some tree species are carotenoids, which color the leaves orange and yellow.

Red leaves, on the other hand, are colored by anthocyanins, produced only in the fall; it is thought that they act as both sunscreen and something like antifreeze to protect the leaves.

But it isn’t just the environmental cues during the autumn that impact the timing and intensity of leaf color; conditions during the spring and summer growing season also influence whether nature’s fireworks are at their brightest or more of a dull dud.

One of the main impacts on fall foliage this year has been the drought that has blossomed across New England and the Southeast since late spring. The epicenters are in central Massachusetts and southern New Hampshire and the northern parts of Georgia and Alabama and southern Tennessee. In parts of the interior Southeast, rainfall from May through October was between 30 and 70 percent of normal, while it was less than 75 percent of normal from March through October in large parts of the Northeast.

Severe drought during the growing season tends to cause trees to begin to turn color early and not last as long; it can even lead them to skip color all together, browning and falling before fall even really gets started.

More moderate drought, on the other hand, can actually delay the onset of fall color. The reasons for this seeming paradox aren’t well understood, Silander said, but seem to be related to a slow-down in the metabolic processes of the trees when they are under only mild water stress, vs. the shutdown that comes from more intense pressure.

So in the Boston area and central Massachusetts, where drought is severest in the Northeast, fall colors have likely come earlier, with more trees with brown leaves. While in the North Carolina Appalachians, more moderate drought levels — along with warmer temperatures — delayed the peak by about a week or more.

“What I think people have seen is just a lot of variability,” Silander said.

The effects of drought can also depend on the tree species. “Some species are much more sensitive to drought than other species,” Silander said. Sugar maples, which provide some of autumn’s most intense color, aren’t as tolerant as oaks, which tend to have duller colors.

In the Southeast, tulip poplars erupt in orange and yellow when rains are normal, but in drought “the leaves kind of brown up and turn black and just fall off,” Howard Neufeld, a plant physiologist at Appalachian State University in North Carolina, said.

Plant ecologists were expecting red leaves to be less brilliant this year in the mountains of the Southeast, Neufeld said, but did better than expected, likely because mornings were just cool enough to stimulate production of anthocyanins.

Like drought, severe heat stress can contribute to the early browning and loss of leaves, while moderate heat can actually delay the change to fall colors, because trees aren’t getting the signal that fall is here.

The period from July through September this year was the hottest on record for the Northeast and Southeast, according to the National Oceanic and Atmospheric Administration.

In the future, those temperatures are expected to increase in all seasons as the world as a whole warms because of excess heat trapped by greenhouse gases accumulating in the atmosphere. But the effect on fall leaves depends on just how much temperatures change.

In northern New England, for example, temperatures are expected to still be fairly moderate, which would be expected to lead to a later emergence of fall colors, while in southern New England, trees will likely be subjected to more heat stresses, potentially leading to more early coloration and faster leaf drop.

Future precipitation trends in both areas aren’t as clear, though there are indications that rain will come in more intense, episodic bursts, leaving more time between them for trees to experience drought stress.

When droughts do occur, they will be more intense than those in the past, because higher temperatures will lead to more evaporation from soils and transpiration from plants.

“If it gets warmer and the precipitation stays the same, that’s more drought stress for the trees,” Neufeld said.

Warmer temperatures could also affect the brilliance of red leaves in the future, as the nighttime low temperatures that help stimulate red pigments have been rising faster than daytime highs.

Local colors could also shift in the future as species migrate upwards in elevation and further north to stay in their preferred temperature range; sugar maples, for example, could move out of New England and into Canada.

While the future of fall foliage may be a lesser concern than sea level rise or extreme weather, these changes could have a serious economic impact: Fall is the biggest tourism season in Asheville, N.C., bringing in some $600 million to $800 million, Neufeld said. Leaf peeping brings billions to the economies of Vermont and New Hampshire and tens of billions across the entire eastern U.S.

“From an economic point of view, we don’t want to see it go away,” Neufeld said.

But on a more philosophical note, Neufeld thinks autumn is the “one season that gets people to go out and see nature,” he said, and the more people interact with nature, the more they care about it.

In that way, fall foliage is “a kind of a subtle way to increase environmental awareness,” he said.