During drought, trees across the Amazon continue to stretch their limbs. But they shirk one of their more important, planet-saving tasks: inhaling carbon dioxide from the atmosphere.

In the drought of 2010, the ability of the Amazon’s trees, shrubs, bushes and vines to absorb carbon was greatly diminished, according to new research that used on-the-ground measurements for the first time. That data reveals a slightly higher estimate than recent computer and satellite studies and paints a worrisome picture for a region that has dried up to 25 percent since 2000 and is projected to get drier in the future. 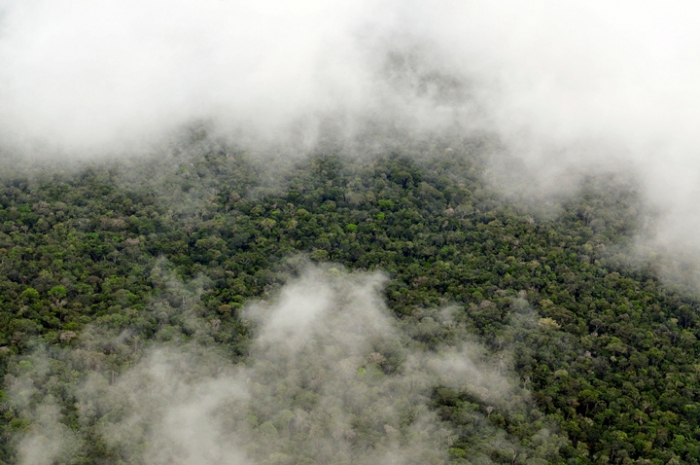 Aerial view of the Amazon Rainforest, near Manaus, the capital of the Brazilian state of Amazonas.
Credit: CIAT/Flickr

Without the Amazon, the impacts of climate change would likely be far worse. The forest sequesters about a quarter of all human carbon dioxide (CO2) emissions, stashing them in plants and soils. But a warmer, drier future could reduce its ability to store carbon and could turn it into a source of CO2 emissions as trees die and release the carbon they stored.

“We need to understand physiologically what’s happening to the trees,” Chris Doughty, a lecturer at Oxford and lead author of the study, said. “They’re taking up significant amount of CO2 from the atmosphere so that CO2 is not contributing to global warming. When that stops it will have a big influence on the future climate.”

The research, which happened to coincide with the 2010 drought, offered a prime opportunity to see what that hot, drier future could mean for the Amazon’s trees. Doughty and his colleagues had spent the previous few years setting up 13 field sites around the Amazon basin far from roads and usually a few days’ hike into the woods. The sites were chosen to capture what’s happening in the furthest reaches of the Amazon.

Their results show that trees inhaled less carbon even as they kept growing at an average rate. Growing during a drought might seem like a bad idea for trees, but Doughty said they are forced to compete for limited sun in a dense jungle, so they keep reaching.

But all that striving takes its toll. In the year following a drought, more trees died off at drought-afflicted sites than those that had normal precipitation. Doughy called this a “second pulse” of carbon emissions from the forest, as trees decomposed. Based on the results at their field sites and satellite data, Doughty and his colleague estimate that the drought reduced the amount of carbon sequestered by trees by about 0.38 petagrams or roughly the equivalent of all of Ireland’s carbon emissions.

“This is a comprehensive study of field observations collected over multiple years to analyze carbon dynamics and carbon allocation of tropical ecosystems during drought events. Their finding shows that trees are forced to live a life closer ‘to the edge’ during severe drought events,” Thomas Hilker, a forestry expert at Oregon State University, said.

Hilker’s work has looked at recent drying trends in the Amazon and what it could mean for the region’s carbon balance sheets.

If dry spells increase in the Amazon as some models project, that could mean more frequent double-shots of CO2 from the forest. Previous research has identified El Niño years as particularly bad years for the rainforest. In the future, climate change could double the likelihood of super El Niños, further upping the odds of severe droughts in the region.

Doughty said that this sort of data is vital to improve predictions for the future of the forest as well as climate change for the whole planet.

You May Also Like:
Arctic Sea Ice Is Getting Thinner, Faster
After Much Ado, El Niño Officially Declared
How Did Your City Fare This Winter?
Solar Energy Jobs Growing By Leaps and Bounds