Scientists Turn to Drones For Closer Look at Sea Ice

The sun has finally risen above the horizon in the Arctic after months of darkness. That means the floating ice that clogs the world’s northernmost seas every winter is beginning to loosen and it’s time for Christopher Zappa to head for the town of Ny-Ålesund, in the Svalbard Archipelago, a group of islands located about halfway between the northern tip of Norway and the North Pole. 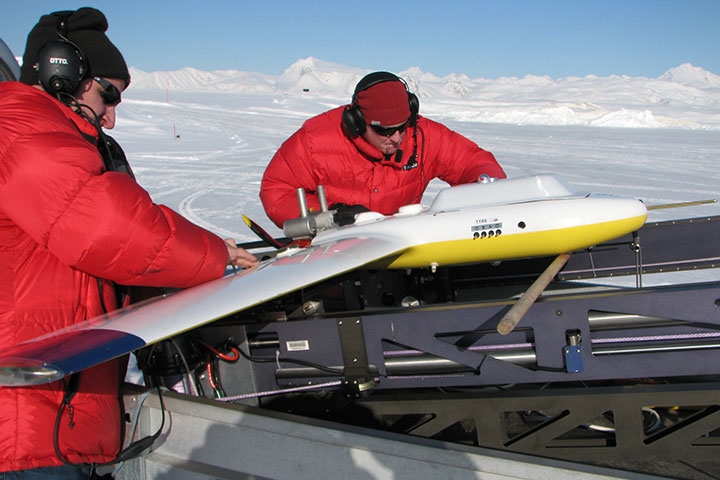 Zappa, an oceanographer at Columbia University’s Lamont-Doherty Earth Observatory, wants to understand the details of exactly how sea ice breaks up and melts, and he is going to call on a quintessentially 21st century technology to help him do it. Zappa is among a small group of scientists globally who are pioneering the use of “unmanned airborne systems” — or drones, to you and me — in a campaign to better understand Earth’s changing climate.

Svalbard is an ideal place for Zappa’s studies. The islands lie astride Fram Strait, where sea ice blowing out of the Arctic Ocean streams southward every summer: breakup and melting are going constantly there from April through September. By September, the ice will dwindle to its annual minimum extent — a minimum that has trended dramatically downward since the late 1970s, largely as a result of global warming. The open water exposed as the ice melts absorbs solar energy that would otherwise bounce back into space, further heating the planet.

For these last two weeks of April and the first week of May, Zappa and several colleagues will be launching their drones, which fly autonomously, on alternating four-hour sorties westward over the ice to measure water and ice temperatures; ocean salinity; albedo (that is, the reflectivity of the ice) and more.

“Satellite observations are important, but they only give you a big-picture sense of how much ice is there,” Zappa said. Research ships come much closer to the action, but they only let scientists study limited areas of ice.

“With drones, we can study melting and other processes as they’re happening, on a very fine scale,” Zappa said. And they can cover hundreds of square miles of ice and ocean with every flight. “They’ll go about halfway to Greenland and back on every flight,” he said. It takes just two people to launch and recover the drones, which take off and land like conventional winged aircraft.

Unlike the high-altitude Global Hawk drones NASA uses to study hurricanes, the unmanned vehicles that Zappa uses, known as Manta UAVs, are modest in size and cost. They run between $100,000 and $250,000, compared with a Global Hawk’s price tag of more than $200 million; they have an 8-foot wingspan compared with the Hawk’s 130 feet; and they carry up to 10 lbs. of scientific instruments vs. the bigger aircraft’s ton and a half. 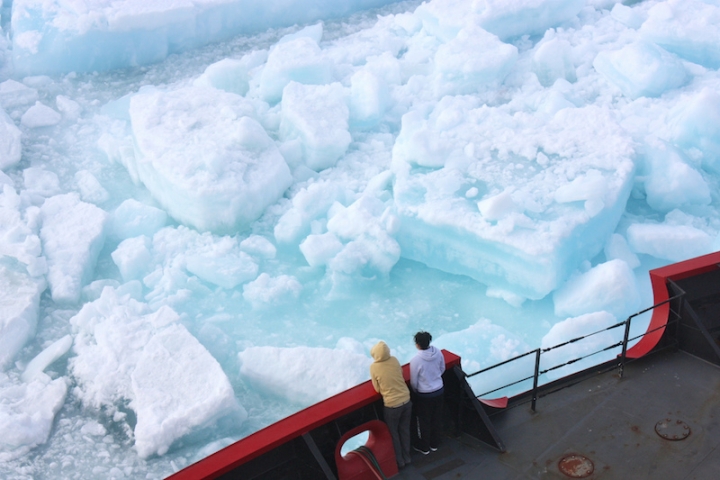 Scientists watched from the deck of the Healy as it cut a path through thick multiyear ice on July 6, 2011.
Credit: NASA/Kathryn Hansen/flickr

The drones not only skim just feet above the surface for close-up observations, they’re also designed so the scientists can swap instruments in and out quickly between flights, then send the aircraft back out, like the pit crew at a NASCAR race. One instrument package, for example, uses heat-sensitive, near-infrared cameras to measure variations in temperature in both ice and the water. Another has cameras that detect both infrared and partly visible light, allowing the scientists actually to see the structure of the disintegrating ice. Another carries a radar altimeter, which makes high-precision measurements of the ice’s surface texture. Yet another drops “microbuoys,” which plop into the frigid water to gauge salinity, then beam the data back to base.

While the instruments on these flights are focused on studying changes in sea ice, Zappa said, “the technology is applicable all over the world.” You could go to the equator to look at algal blooms or the day-night cycle of carbon dioxide going into and out of the ocean or dozens of other phenomena, he said.

But useful as drones are, Zappa wants to make them even more useful. Launch a drone from land and you can cover hundreds of square miles. Launch it from a ship, and you can cover a different, equally large swath of ocean every time. Next summer, he’ll be doing just that, from the Schmidt Ocean Institute’s research vessel Falkor.

“We’re going to be studying the sea-surface microlayer,” he said — the top five one-hundredths of an inch of the ocean’s surface. “It’s not well understood, but lots of biology happens there, and it turns out to be important to the exchange of gases between the air and the water.”