The logical next step for exploring some of the world's most inhospitable terrain is being taken. Researchers are using unmanned aerial vehicles (UAVs) – drones – to explore the last great repositories of ice in Greenland, Antarctica and Alaska. 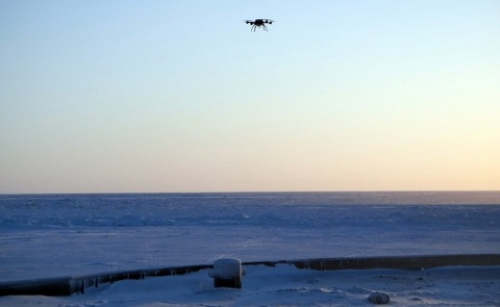 About two dozen universities and research organizations, including NASA and the National Oceanic and Atmospheric Administration, have registered as drone operators, according to a list released last year to the Electronic Frontier Foundation.

Some of those researchers were tracking wildfires or ozone concentrations, oil spills and volcano ash, but a significant number were deployed to the polar regions to study the melting of the ice.

The planes vary in size, from small, remote-controlled propeller aircraft that look as if they belong in a toy shop to the latest high-altitude jets.

Some take off from landing strips, others after being thrown into the air. Some fly for up to 20 hours, depending on the weight of the instruments aboard; others can remain airborne for only a few minutes at a time.

But UAVs are increasingly being sent into situations too dangerous for humans, such as the center of a developing storm or to extremely remote areas.

They generally fly lower and slower than conventional aircraft, and are much quieter. They are also much cheaper: about $100,000 for some modest systems.

Among the research projects to date that have used UAVs was Colorado University's participation in unmanned science flights across Antarctica, Greenland and the Svalbard archipelago in Norway to study changes in the sea ice. 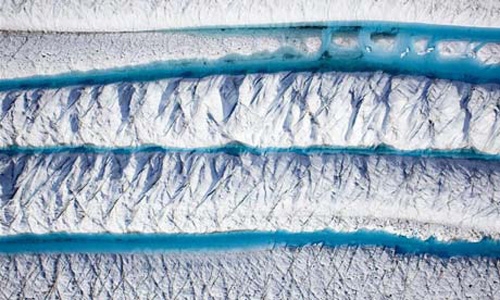 A section of the Petermann glacier in Greenland, photographed by the 'heli-cam,' a remote camera attached to a small single engine helicopter, triggered from inside the cockpit by remote control.
Credit: Nick Cobbing/Greenpeace, via The Guardian

And scientists from the University of Alaska at Fairbanks used a small battery-powered drone to map the summer breeding grounds of sea lions, flying over the animals at heights as low as 300 feet.

However, Chris Zappa, an oceanographer at Columbia University's Lamont-Doherty Earth Observatory, who has used UAVs in the Antarctic as well as Greenland, said the use of UAVs in research was still in its infancy.

Regulations are also lagging behind. The Federal Aviation Authority has limited the use of drones by civilian organizations and is expected to draft new regulations in 2015.

“We are on the cutting edge of where gliders were in oceans 20 years ago,” said Zappa. “We had this technology and people were just figuring out how to use it – and now everyone is using it.

“We are at that stage with unmanned aerial vehicles where we are just figuring out how to put things on them, and use them, and it is just going to burgeon into a capability to look at the world in a new way.”