Technological advances in drilling efficiency are one of the reasons shale oil and natural gas production continues to skyrocket in six of America’s biggest oil and natural gas fields, according to a new U.S. Energy Information Administration report.

Production of crude oil and natural gas through the use of hydraulic fracturing, or fracking, is considered to have a significant effect on climate change because of methane leaks in the natural gas distribution system that haven’t been quantified yet. And, burning crude oil is a direct emitter of greenhouse gases contributing to human-caused climate change. 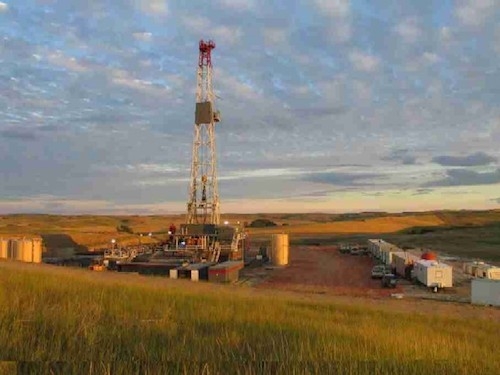 A drilling rig in the Bakken shale oil play in eastern Montana.
Credit: Montana Board of Oil and Gas

The EIA reports that more oil and gas is being produced more efficiently now than even a year ago in natural gas fields in the Marcellus shale of Pennsylvania and the Haynesville shale of Texas and Louisiana. That’s also true in the crude oil fields of the Eagle Ford and Permian basins of Texas, the Niobrara shale of Colorado and Wyoming and the Bakken shale of North Dakota and Montana.

In Nov. 2012, about 300 barrels of crude oil per day were being produced for each active drilling rig in the Bakken shale of western North Dakota. Today, crude oil production per rig has increased to 500 barrels per day. In Pennsylvania’s Marcellus shale, roughly 5 million cubic feet of natural gas were being produced per rig per day, a figure that has jumped to about 6.5 million cubic feet today.

In each of the six major oil and gas fields across the country, overall production has increased dramatically over just a year ago. Crude oil production in the Eagle Ford shale, for example, has increased to more than 1.3 million barrels per day today, up from about 800,000 barrels of oil per day at the beginning of 2013. Natural gas production has seen increases nearly everywhere except in east Texas and Louisiana, where production has begun to decline, EIA data show.

By next month, each Eagle Ford drilling rig is expected to contribute over 400 barrels of oil per day more than it would have drilling in the same area seven years ago. In the Marcellus, natural gas wells drilled today can be expected to produce more than 6 million cubic feet of gas per day than a newly drilled well would have in 2007, according to the EIA.

“I would say that the utilization of mobile drilling pads has played a major role in increasing the number of wells that can be drilled per rig,” he said.

Mobile drilling pads have long been used in shale oil and natural gas fields. For example, when natural gas drilling was booming in western Colorado’s Piceance Basin more than seven years ago, a movable drilling platform could drill perhaps dozens of wells right next to each other on the same drilling site. The wells themselves would angle in different directions deep underground from the land surface using a technique called “directional” drilling.

“Essentially, mobile drilling pads allow operators to move rigs between different well sites in the same location so that groups of wells can be drilled without having to disassemble a drilling platform,” Ford said. “This reduces the amount of time that it takes to drill individual wells.” 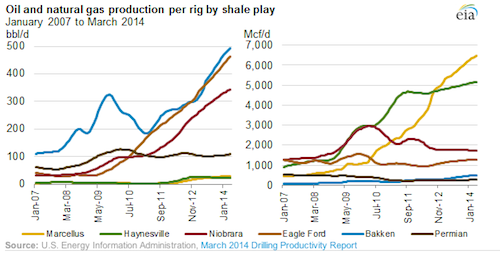 Energy companies have been focusing on drilling “sweet spot” areas in oil and gas fields — areas where a greater concentration of oil and gas can be found and extracted, he said.

Drilling techniques have been refined to maximize the oil and gas bearing area that each well can access, and drillers are likely to have used fracking to increase the amount of oil and gas they can extract and bring to market, Ford said.

As the EIA expects natural gas production in the U.S. to increase 56 percent through 2040, what greater oil and gas drilling efficiency means for the climate is an open question, however.

Scientists have long complained that there are too little data available to accurately assess energy production’s impact on groundwater, air quality and the climate, and access to oil and gas drilling and production sites is often too restricted for scientists to adequately study them, a group of scientists said during a presentation at the American Geophysical Union Fall Meeting in San Francisco last December.

A Stanford University-led study released in February showed that methane leaks are common in natural gas production and distribution. However, those leaks may not fully negate the climate benefits of using natural gas to produce electricity.

Fracking alone could emit up to 1 teragram of methane per year in the U.S. — only a fraction of possible overall natural gas methane emissions, the study’s co-author Francis O’Sullivan said when it was published last month.

You May Also Like
The Best View You’ll See of the Spring Equinox
A Cold U.S. Winter for Sure, but 8th Warmest Globally
White House Brings Together Big Data & Climate Change
Wood Burning for Home Heating Trendy in Northeast